We often hear about the power of forgiveness. Its ability to transform and heal, freeing us from the weight of bitterness and resentment that anchors itself all too comfortably in the depths of our soul.

The concept, in theory, is familiar: to forgive is to recognize the reality of human fallibility and our finite understanding of the cruelty and injustice we at times bear witness to in an imperfect world. In practice, however, forgiveness is more uncomfortable, challenging us to confront our pride and redirect our inherent desire for revenge and ill will with a purity and grace that seems more well-suited for a heavenly, divine people.

Perhaps this is why the nation stood in awe in the days following the June 17 shooting at the Emmanuel African Methodist Episcopal (AME) Church in Charleston, South Carolina, where nine people were killed during a Bible study session by a troubled, 21-year-old boy, Dylann Roof.

There were no protests or riots. There was no violence. There were no evil words. There was simply - standing in stark contrast to the emotionally charged reactions of Baltimore and Ferguson - a message of wholehearted forgiveness.

Even Rev. Joey McDonald, Pastor of the United Methodist Church in Bluffton, South Carolina was taken aback by the overwhelming message of forgiveness that the families of the nine victims offered to the accused murderer.

"When those people forgave, it touched something in me," he said. "I'm a believer. I'm a Christian minister, and I'll be honest with you: I really believe that, at the end of the day, I could have forgiven this guy." But, he said, "It would have taken me a lot longer."

Just two days after the shooting, the family members attended the bail hearing of Dylann Roof, where they were given the opportunity to share a statement with the young man who had so heartlessly stolen their loved one's life.

"And not only did they say that," he continues, "some of them started ministering to the man and said, 'Look, if you'll confess your sins and come to Jesus, you'll be ok'...I mean, that is the most Christian thing I think I have ever heard about in my entire life."

Speaking with Rev. McDonald - a South Carolina native who has just started his 22nd year in ministry and sixth year at his rapidly expanding church in Bluffton - you get the sense that, as unexpected as the reaction in Charleston was to many across the country, those with a Southern heritage might not have expected anything less.

"I think there's a lot of gentleness about being in the South that I have not discovered in other places," he says. "Certainly not in everything we do, not by a long stretch - and we have our issues - but there's a gentleness that I experienced growing up that I don't experience when I go to other places in the world."

In fact, Rev. McDonald attributes one of the reasons the families responded the way they did to the fact that it happened in the South. "If this tragedy in Charleston had not happened in the church, I still think it would not have turned out like it did in other places [i.e. Baltimore and Ferguson], because of that very gentleness."

But, he says, "Since it did take place in a church, that guy [Dylann Roof], when he wanted to start a race war, the worst thing he could have done is go into an African American church." 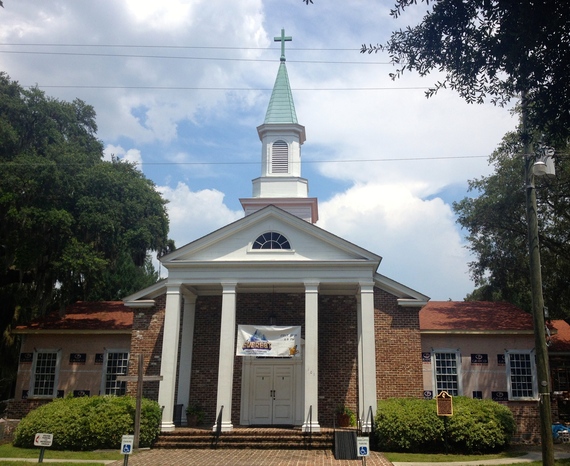 On a whole, African American churches tend to be much more forgiving than, for lack of a better term, 'white' churches - and it isn't entirely difficult to understand why, Rev. McDonald says. "African Americans over the last couple of centuries have had to be more forgiving because they've had more atrocities [to overcome] - it's been part of their history."

Interestingly, however, he acknowledges the difference between how African Americans in Charleston responded compared to those in Ferguson and Baltimore who began rioting after Michael Brown and Freddie Gray were killed at the hands of white police officers. So, how can that be explained?

"Well, we're getting to a finer point", he says. "The thing that was first and foremost [in aiding their forgiveness] was because they were believers."

Rev. McDonald points to the words of a woman preaching during Senator Clementa Pinckney's funeral who, in an attempt to explain to people who were questioning why they didn't take to the streets and riot, responded with: "They just don't know who we hang out with. We hang out with Jesus."

Several Sundays ago, Rev. McDonald preached on what happened in Charleston, noting how the shooter was listening to the wrong "voice" - a term he uses to describe the many influences we are surrounded by in life.

"These people in Charleston," he says, "they listen to the voice of their Savior." And their forgiveness "was an extension of who they are. It was like it was just part of them, as if they said 'of course we're going to do this, we can do nothing else.'"

The concept of forgiveness, in the face of such a heinous act, can be difficult to accept. Indeed, some people have questioned its merit, arguing that it is the "easy way out" and emboldens people to continue committing egregious crimes.

He notes, however, that there are always people who will take advantage of that. But, he says, "there are other people who will be transformed by that forgiveness. I know, because I am one of them."

I happened to interview Rev. McDonald on the day the Confederate Flag came down from the South Carolina statehouse. He explained to me that he was not in favor of the flag, but wasn't one to staunchly advocate for its removal since he has always been able to see the other side of the issue.

Witnessing the reaction of the people in Charleston on that fateful day, however, Rev. McDonald was a bit transformed himself: "If those folks in Charleston can respond like that, then the least the rest of us can do is to take the flag down and stick it in a museum."

He called upon a scriptural reference to further exemplify his point. In the time of Jesus, it was considered sinful for believers to eat meat that pagans had scarified to idols. The Apostle Paul, however, reminded followers that, "In Christ, you have the freedom to eat" whichever meat you choose - with one caveat:

"If in exercising your freedom," he paraphrased the words of Paul, "you offend the conscience of your brother or sister, then don't do it."

Given that we have freedom in our country, we should have the freedom to fly that flag, he says. "But, as a Christian, if this offends my brothers and sisters in Charleston, who can forgive like that, then just take it down."

He adds: "It was because of the way those people in Charleston responded, more as Christians - I don't care what color they are - that the flag came down today."

Faith in Our World Today

While you would never know it by looking at the United Methodist Church in Bluffton where Rev. McDonald ministers - since he became pastor, the church has grown financially, in membership and now physically with an extensive addition currently under construction - Christianity is very much on the decline in America, as a Pew Research Center survey recently confirmed.

"In America, we're kicking God out of everywhere we can possibly think to get him out of and shaking our fist in his face," says Rev. McDonald. Part of the problem, he explains, is that we are an overly affluent society, noting one's natural tendency to attribute their success to their own doing.

"The more affluent I am, the more I think I'm doing on my own. I don't realize I am still a recipient of God's grace," he explains. "People say, 'If I can do this all on my own, why do I need a God who places demands on me?'"

And God does place demands on us, Rev. McDonald stresses. "In fact, the more you get to know Christ, the more demands he places on your life. He says, 'Pick up your cross and follow me.' That's not an easy thing to do. He says, 'Deny yourself.' He doesn't say go and float around in your excess."

It's not that God doesn't bless, he adds. "He certainly does. But, when we start focusing more on the blessing than the blesser, we start to have all kinds of problems." 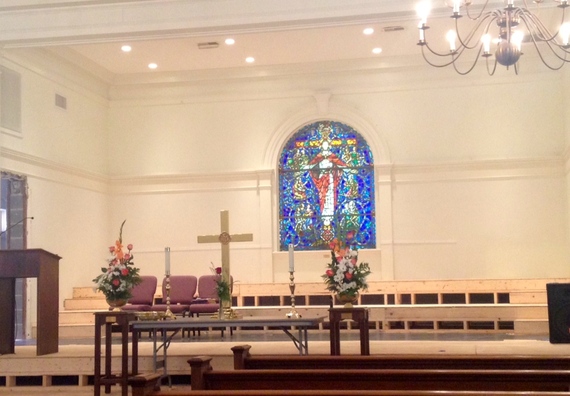 One of the problems facing many Christians today is a society that is quick to dismiss and reprimand believers who, by the very nature of their religion, hold certain beliefs and opinions.

"It's become harder and harder in this society to be a Christian without being persecuted," he explains. "So often we think of persecution as prison or death, but there's emotional persecution, too. And there are the 'I think you're an idiot' or 'how can you believe that' comments. All that stuff hurts because, as a Christian, what we are called to do is, emotionally, we are called to open up and be vulnerable."

He adds: "That's what Jesus means, or part of what he means, when he says to turn the other cheek." Sadly, however, "this world will tell you that if you're vulnerable, you'll get devoured in two seconds...which, you will."

Growing in Faith After Charleston

We could all learn something from the people of Charleston and their reaction to the forces of injustice and evil that descended upon their city the night their family members were taken.

How easy it would have been for the community to break out in protests and riots like those we saw in Baltimore and Ferguson. Instead, thousands gathered peacefully and in unity on the Arthur Ravenel Jr. Bridge - just four days after the tragedy - with signs that read, "We Will Rise Above The Hate."

The ability of the Charlestonians and the affected family members to so readily forgive their perpetrator is not an indication of an apathetic people, nor does it signal the ease with which one is able to forgive. Rather, it is a manifestation of how strong their faith really is - a term Rev. McDonald prefers to distinguish from the notion of "religion." 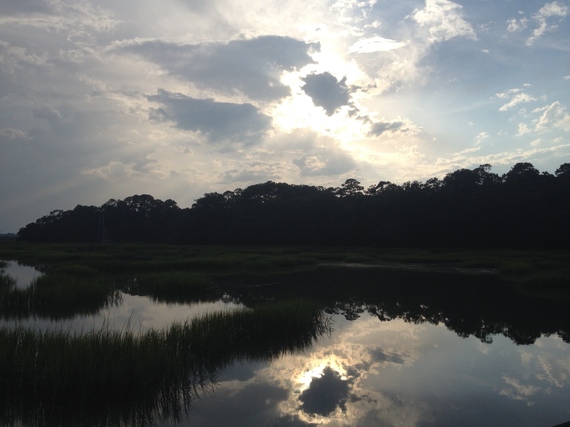 "I like to say 'people of faith,'" he explains. "I think of the Pharisees as religious people...they had a structure built over what they believe; they put God in a box." But, when Jesus came along, from outside their neatly arranged box, they had no room for him - and so, they rejected him.

He adds: "It's a difficult thing to grow."

It's also a difficult thing to forgive. The people of the AME Church in Charleston, however, have blazed a path for the world, gracefully reminding us of what can happen when you flourish to the most heavenly heights in your journey of faith.

Much like forgiveness, we often hear about the power of faith. Its ability to transform and heal. While the concept is familiar, it is its practice that poses a greater, more demanding challenge. But, the people of Charleston are proof that it is not impossible to live it. And to live it is not to blindly surrender to acts of cruelty and injustice.

On the contrary, it is transformative. It is powerful. And it is a reminder to all of us that goodness can, indeed, rise above hate...rise above the forces of evil.