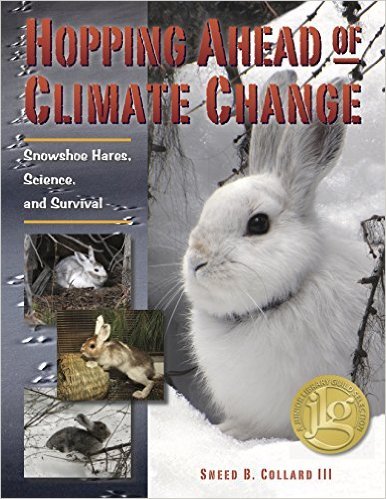 For the climate change deniers, how about giving them a children's book on the subject? Maybe then, they'll understand. Sneed B. Collard III's latest book, Hopping Ahead of Climate Change: Snowshoe Hares, Science and Survival tells the story of the unfortunate predicament of the snowshoe hare in the forests of Montana. Like the canary in the coalmine, whose death reflects change in the amount of methane gas in coalmine air before it becomes fatal to miners, the snowshoe hare is a harbinger of climate change. Its nickname is "the cheeseburger of the forest."

The problem is camouflage from predators. During the late spring and summer the snowshoe hare has a brown coat to blend into the forest floor. By late October the brown coat has been replaced by one that is snow white, to blend into the winter-long covering of snow. However, in recent years, there is no snow by late October so the white hare sticks out like a neon sign saying "eat me" to lynxes, owls, cayotes, bobcats and more. Wildlife biologist at the University of Montana, Scott Mills, started studying the snowshoe hares back in 1998. He discovered that the change of color of the hares' coats was tied to the length of the day, not the temperature. So if there is no snow, the hare is mismatched to the forest floor, thus easily visible and fast food for predators.

In the past ten years, Scott Mills and his graduate students have learned a great deal about the hare population and what the future holds for them as the world warms up. The prediction is not good
.

Hare population is not only responsive to climate change but also affects the survival of predators. Collard explores the complexity of ecosystems to bring home the interconnectivity of human activity and nature.

What is most fascinating about Hopping Ahead of Climate Change is that Collard explains how Scott Mills asks questions and then goes into the forest to find answers. This book shows how scientists know what they know. More importantly, everyone should understand that how a scientist knows determines what a scientist knows. It is the incremental discoveries through the process of science that produce irrefutable evidence leading to inconvenient (or sometimes breakthrough) truths.

If you understand that, you'll know why climate change deniers are on the wrong side of history.