If you gravitate to old guys like I do -- my dad used to say old guys are interesting even when they're being quiet -- you hear a lot about how Chicago used to be. Enough, sometimes, to feel a little sorry you didn't live back then.

I live on the near West Side. So I hear the old Italian talking about how, before the UIC campus wiped out the neighborhood in the '60s, you could smell spaghetti gravy all the way up and down Taylor street, from Halsted to Western. Spaghetti was all anybody cooked back then, because it was cheap and "nobody had any money," he says, wistfully.

Another Italian guy, a cab driver, picks me up near my house near Ashland and Grand; says he grew up here, but left the neighborhood when the Puerto Ricans moved in, in the 1960s and 1970s. "God, I hate Puerto Ricans," he says. "Know how I know? I married one! Big ass, big tits, big mouth."

These old guys might be sentimental on one hand and a little kooky on the other, but they're not stupid. A prominent preservationist went to the Polish/Catholic Union looking for political support for saving the Polish St. Boniface church from the wrecking ball. "Aw Christ," he was told, "the only people who care about preservation are florists and hairdressers."

More satisfying is to try to see the neighborhood as the old-timers remember it -- see vestiges of how things used to be.

The funeral director at Walter Sojka Funeral Home sits on his bench gazing across Chicago Avenue into the open-windows at the trendy Five Star bar. His face tells the young revelers (tells me, anyway): Have your fun now, my young friends. You'll have to cross the street someday.

No one fights the hot summer nights by sleeping at Eckert Park, as they used to do before air conditioning. But my five-year-old daughter and I sometimes sleep on the back porch, under the stars.

Like every barkeeper worth his salt in the old days, Joe Tunk of the Chipp Inn at Greenview and Fry, can casually recite all the brewing industry mergers and buyouts, strikes and lockouts going back toward the beginning of the 20th century. 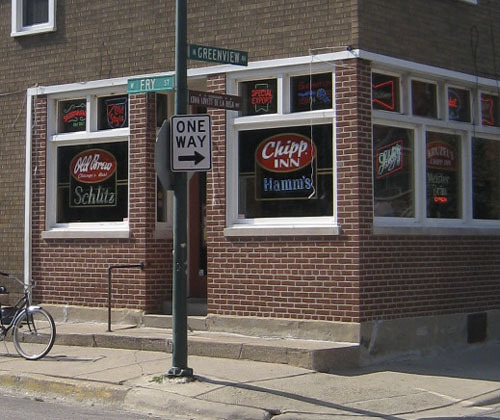 The half-dozen men behind the counter at the Bari market on Grand are so cheerful as they make your Italian sub that you're grateful for the privilege of giving your money to the sardonic, slightly disapproving mother-figure at the cash register.

On the other hand: At Duk's hotdog shack on Ashland, the only time the employees stop fighting with each other is when the old owner rolls up in his 1990 white Cadillac convertible and graying white linen suit and matching fedora. 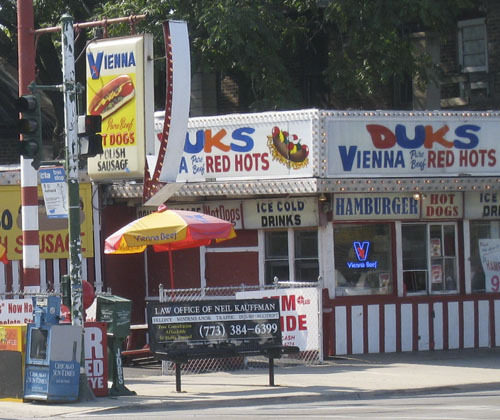 Instantly they drop their truculent attitudes, they stop squabbling over who splashed whom with more fryer grease and they hop to it. Mister this and mister that. Can we get you some ice water, sir? But they can do no right. In front of the customers, the boss grumbles ominously about everything from the overflowing trashcans outside to the unkempt grill. The moment he leaves, it's back to the usual slovenly stuff.

When we visit Candy's corner grocery store at Noble and Ohio, my daughter has strict instructions not to ask for a lollipop, but to take one only if it's offered. By the time, she was making small talk with the clerk, "Hello, how are you today? It's beautiful weather we're having, don't you think?" 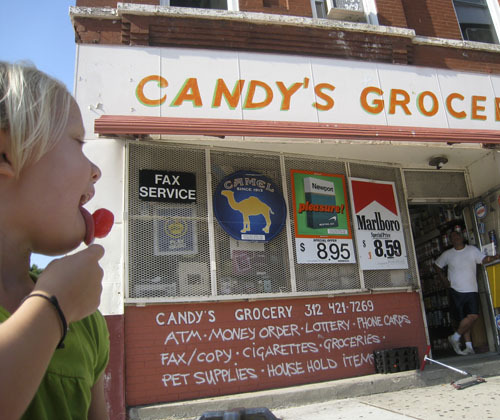 Once or twice a week in the summer, I get my exercise by shooting hoops around lunchtime at the playground at Talcott School on Ohio Street. Often kids sidle up -- little kids and grown kids, on one occasion a group of emotionally disturbed kids from the nearby Esperanza school -- and ask if I mind if they join them. I've never minded yet.

One day the other day a little Mexican kid came up, and then a pair of black kids, slightly older. We started playing two on two, the Mexican and me against the older partners. For some reason, one of the black kids, who identified himself as "Superboy," started calling the Mexican kid "Chinaman." The Mexican kid said nothing to defend himself. I thought about stopping the game to give a lecture about name-calling.

Instead, I decided to make sure that we won handily and see that the Mexican kid made a most of the baskets.

When the winning basket went through the chain, I said, "Looks like the Chinaman just whipped your ass, Superboy!"

And we all laughed.

I thought I handled that one pretty well.