Today, the book Marry Him: The Case for Settling for Mr. Good Enough by Lori Gottlieb goes on sale, sure to start flying off the shelves faster than Manolos at a sample sale. It's already been snapped up for a Warner Brothers movie, starring Tobey Maguire (and written by Jill Soloway). The book started off as an article in the Atlantic Monthly in 2008, which was swiftly emailed around like a scary chain letter by single career girls--the type with a healthy smattering of exes as Facebook friends and big dreams to land Mr. Big in their mid 30s. 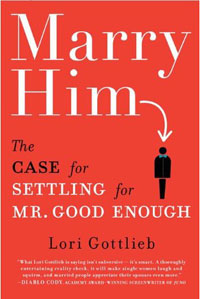 Lori had a baby on her own, in her late 30s and advises women like her to just settle down already instead of trying to parent on their own--a guy with bad breath is better than going at it alone. Still, Lori's book lacks a happy ever after ending about her Mr. Good Enough. Will her future dates worry that they are merely mediocre potential baby daddies instead of soul mates, lovers and best friends? It's a big risk, but one sure to at least pay off via royalties.

Past chick lit sensations about singlehood that have equally fascinated and freaked out single women also lack the beautiful sunset ending for their authors. None end up married with children. They seem to only get one or the other, if they're lucky. Is it a curse?

The Original: Sex and the Single Girl
In 1962, Helen Gurley Brown published Sex and the Single Girl, a bestselling book that urged women to have careers, spend their money on fab clothes and cars, sleep with anyone they want (married guys, check, just don't ever cook for him!) and always keep a good stash of liquor at home. At all costs, avoid becoming a suburban housewife!

She ended up landing David Brown, the recently deceased movie producer who helped fast-track her publishing career. Rumor has it that he was responsible for those saucy Cosmo cover lines during her tenure as the magazine's editrix and he helped sell her book to Hollywood. No kids.

The Sequel: Sex and the City
In 1997, Candace Bushnell published Sex and the City, a collection of her addictive columns for the New York Observer that encouraged women to have sex like men and blow their rent on designer shoes. Everyone went nuts for it and the second Sex and the City movie is coming out this spring. The third is probably in the works, too. Candace married Charles Askegard, a dashing ballet dancer. No kids.