Imagine that you've started a business producing widgets. Now imagine that there are nearly no rules regarding how you produce your widgets -- you can essentially do what you like, including passing on all types of costs, like environmental pollution, safety risks, and more to the public. And then imagine that some of your most expensive production costs get subsidized by the federal government, allowing you to sell your widgets at an artificially low price to American consumers.

Pretty sweet deal, right? You'd think that might be enough for your company, that you'd be satisfied. But if the widgets you're producing are chickens, and you're a major poultry meat producer, it's apparently not nearly enough. 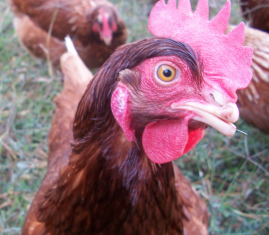 The broiler industry wants to keep chickens in inhumane conditions, dump massive amounts of pollutants into our waterways, and brush off food safety concerns. On these issues, the chicken meat industry takes a decidedly free-market, anti-government-intervention stance. Virtually any form of federal regulation is frowned upon. However, when it comes to supply and demand, the industry rushes to embrace socialism as quickly as flies to chicken manure.

The industrialization of factory farms has driven many smaller family farmers out of business. Now, consumer demand for chicken meat remains below the number of birds the industry is raising and killing. But rather than allowing the free market to adjust to basic supply and demand principles, the chicken industry last week seemed happy as a pig in -- well, you know -- over the federal government agreeing to buy 138.7 million pounds of otherwise-unwanted chicken products.

Why would the government do this? In their announcement, the feds were pretty clear: "for surplus removal."

In other words, since the poultry meat industry produced more chickens than it could sell, the government will step in and provide a cushy taxpayer bailout. In fact, this is just what that National Chicken Council, an industry lobbying group, proposed to the U.S. Department of Agriculture. In a letter from NCC president Mike Brown, he lamented that "over-supply of dark meat is a burden to producers/processors," and pleaded for a federal buy-up.

And the federal handout doesn't stop with this supply and demand distortion. The poultry industry receives billions of dollars in indirect agricultural subsidies that artificially reduce the cost of the most expensive part of their business: corn and soy grown to feed billions of birds. Tufts University estimates that the chicken industry alone saved $1.25 billion in feed costs from 1997 to 2005 just from taxpayer-funded subsidies.

At a time when deficit reduction and federal spending loom so large in America's political life, this kind of ridiculous corporate socialism, or agricultural welfare, should be the first to go on the chopping block.