The MDGs have been credited with saving and improving the lives of millions of people. However, they largely failed to reach the world's most vulnerable children. Those often living in fragile or conflict-affected countries. Children like 12 year old Adel, who fled Syria with his family last year.

Over the past few years, Lebanon's mineral-rich Bekaa Valley has seen an ever-increasing number of makeshift tents crop up.

A young boy smiles as I walk by. He has dark, almond-shaped eyes and high, wide cheekbones. His teeth are strong and white, and he has a wire-strong crop of thick, auburn-tinged hair.

He asks if I will come and meet his family. I say yes and he leads me to a tent at the far end of the temporary settlement. I push back the door flap which, like the walls, is made of hand-stitched plastic sacks. The roof is a heavy tarpaulin nailed to a flimsy wooden frame.

A threadbare rug lies in the middle of the room. His mother and five younger sisters are seated and Adel gestures for me to join them.

Adel introduces me to his mother, Wasfa.

I ask where her husband is. He died, she tells me, in a bomb blast. He was at a vegetable market near their home in Deir ez-Zor.

Wasfa was outside her house when she heard it. "I ran to the market. We all ran, the children too."

There was fire and smoke where the stalls once stood, and bodies lay on the ground or slumped across cars. Some were injured. Others were dead or dying. And then, she says, she saw him.

"The children ... they were so strong ..." she says. They knelt down beside him for a time, and then together they lifted his broken body and carried him back to their home. 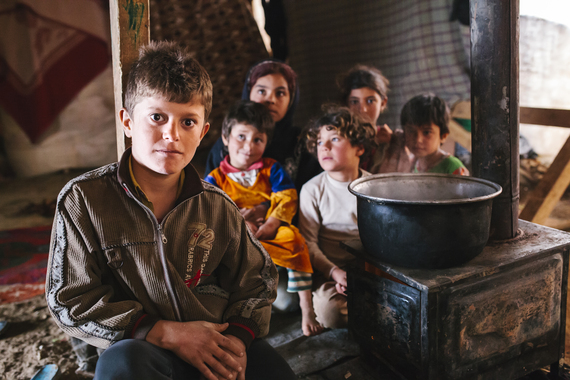 Wasfa says within days she knew she couldn't stay in Syria. It was too dangerous and her family now had no source of income.

They travelled through the night to Lebanon, then followed a neighbor's directions to the tent settlement.

They have been living in the Bekaa Valley for nine months. Wasfa says Adel has become the man of the house.

"I am taking care of my sisters and mother," he says.

He works from 7am until dusk, chopping wood for the owner of the field. He is paid US$2 a day.

I ask Adel what his sisters need. He says "one toy, they would just like one toy".

And then the smallest sister, who has just turned 4 says she would like "an aeroplane."

I ask her why.

Adel smiles. Even at 12 he knows there is no prospect of going home to Syria any time soon.

I ask if he needs anything.

"No, nothing," he says. "I don't want anything other than my sisters' safety."