China's rapid credit expansion is worrying. Will Chinese policymakers be able to contain the growth of credit without undermining economic growth and without triggering a banking or currency crisis? Aside from the consequences of Brexit, this is probably the most important issue facing global policymakers and investors today.

As it turns out, there are powerful arguments on both sides. The positive - high national savings and returns to investment, combined with the government's broad tools for intervention - must be measured against a set of negatives - growing loan losses, the spread of shadow banking, large capital outflows, falling investment returns, and declining confidence in the government's financial policy management. Against this complex background, it is no wonder that concerns and uncertainty are both high. What one can say confidently remains conditional: things are very likely to end badly if, as growth slows, the credit buildup continues.

To examine the challenges facing China's policymakers, we start with some basic facts. The figure immediately below shows that the trajectory of nonfinancial-sector debt has outpaced nominal GDP since 2009, when China embarked on a large stimulus to counter the impact of the global downturn that accompanied the financial crisis. Most of this debt has been concentrated in the corporate sector, which includes China's state-controlled enterprises. As a result, at 171% of GDP, China's end-2015 nonfinancial corporate debt ratio is the highest in the world (excluding the small economies of Hong Kong, Ireland and Luxembourg). Measured in dollars, credit to China's corporations has reached a globe-topping $17.8 trillion, well above that in the euro area ($11.6 trillion) and the United States ($12.8 trillion). Perhaps most strikingly, China's ratio of corporate credit to GDP is a multiple of those in countries with comparable real per capita incomes (see second figure below). 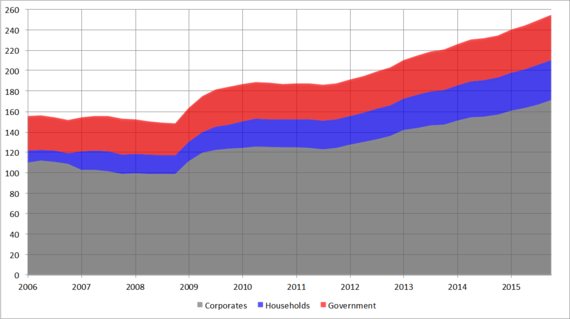 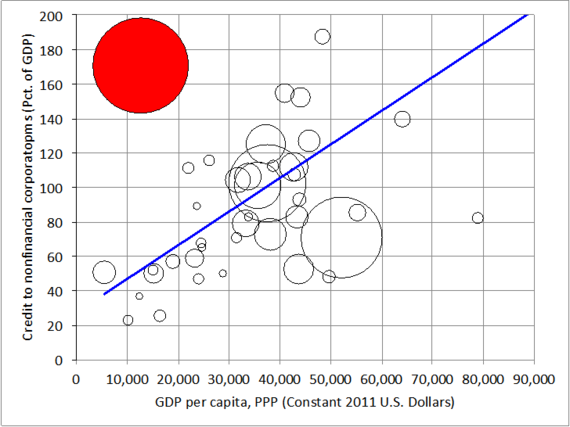 Notes: The size of each circle represents credit measured in U.S. dollars. China is shown in red. The fitted line is shown in blue. Sources: Bank for International Settlements and World Bank.

And, broadly speaking, the balance sheets of China's corporations are weakening. According to the IMF's latest Global Financial Stability Report, for a sample of more than 3,000 Chinese firms, the median ratio of debt to earnings before interest, taxes, depreciation, and amortization (EBITDA) climbed from less than 2 in 2010 to 4 in 2015. Over the same interval, the share of firms whose earnings were insufficient to cover debt service rose from 4% to 14%. The share of firms with a leverage ratio exceeding 3 rose by 14 percentage points since 2009 to 39%. And, as a sign of weakening payment capacity, median payables days (equal to payables/annual sales × 365) rose from 53 to 72.

The deterioration of bank loan portfolios is the mirror image of these repayment difficulties. While loans classified as nonperforming (NPLs) are still only 2.2% of the total (as of end-May 2016), broader measures of loan problems have grown substantially further and continue to rise. For example, adding "special mention loans" at risk of becoming NPLs (4% as of March 2016) raises the problem loan share above 6% of the total. And the IMF's GFSR estimates loans "potentially at risk" (that is, with interest coverage in excess of EBITDA) at more than 15% (about 18% of nominal GDP), consistent with some private estimates of bank losses. An alternative (if less dramatic) measure of the capital shortfall in China's financial system, from the NYU Stern Volatility Lab, puts it at less than $650 billion (or about 6% of GDP) as of July 15, 2016, up from virtually zero in 2008.

While these losses are large, China has worked out much larger bad-loan problems in the past. Back in the late 1990s, following a long episode of undisciplined lending to state enterprises, NPLs may have reached one third of GDP (see Naughton, page 462). To prevent a financial crisis, in 1998, the authorities began to recapitalize the banks. And, a year later, they shifted a significant portion of bad loans from the large banks to special-purpose asset management companies. By 2005, NPLs had dropped below 7%. Authorities used the provision of capital to the largest banks to promote streamlining and greater lending discipline, at the same time that they were shrinking the role of state-owned enterprises (see Lardy, page 75).

Continuing with the positive side, a number of other fundamentals remain favorable today. First, China's enormous national savings (still close to one half of GDP) allows it to simultaneously finance a high level of domestic debt while running sizable external surpluses. As a result, as of end-March 2016, the State Administration of Foreign Exchange (SAFE) estimates that China had accumulated net foreign assets of $1.6 trillion, or more than 15% of GDP. Second, with China's low per capita income and incomplete urbanization, economic convergence should continue to generate high returns on new investment compared to the returns in advanced economies. Third, the range of government tools available to intervene, including rationalizing state-controlled enterprises, remains wider than in most jurisdictions.

So, why worry? Here are our top five reasons, all well known. First, there's moral hazard. With general government debt at 45% of GDP, China appears to have considerable fiscal capacity to clean up the current stock of bad loans. However, as history suggests, it is far more difficult to halt the flow, especially if (as many expect) the government bails out the banks and other creditors, sustaining their incentive to make risky loans. Over time, the danger is a mix of zombie banks and firms that leads to economic stagnation (think Japan and the euro area).

Second, with the migration of credit creation to shadow banks in recent years, China's financial system has become substantially more complex and opaque. Together with the recent deregulation of deposit rates, this has a number of effects. It tends to conceal interconnections among intermediaries. It results in more variable funding costs. And, outside of the very largest banks, it has encouraged greater use of wholesale funding, adding to rollover risk.

Third, since late 2014, with the economy slowing and monetary policy easing, and despite a continued trade surplus, capital outflows have grown. As a result, the central bank's stock of foreign exchange reserves dropped from a record of $4.0 trillion to a still-world-topping $3.2 trillion. While the size of the drop is cause for concern, the greater worry is the pace, which exceeded $100 billion in some months. Reserve balances recently have steadied, but the experience has kept alive investor anxieties about disorderly capital flight.

Fourth, consistent with China's capital deepening and economic maturation, investment returns are declining - a trend that is likely to continue. This pattern is reflected in the rise of the country's incremental capital output ratio (measured as the annual investment ratio relative to the growth rate; see, for example, Figure 12B here). At a slightly less aggregated level, much of the shift from state to private activity already has occurred in industry, while barriers to entry persist in key services (see Lardy). Despite past willingness to shrink the state sector, there is concern that the remaining state-controlled firms constitute a harder core with deeper political connections that requires greater resolve to overcome. It is true that China's Third Plenum (2013) provided a blueprint for greater reliance on market forces, but recent developments (such as an increased role for party committees within state enterprises) cast doubt on the resolve to make the necessary structural reforms at a sufficient pace. In any case, policymakers cannot count on the extremely rapid economic growth that helped mitigate the 1990s NPL problem over the succeeding decade.

Finally, as a consequence of its awkward interventions in the markets for equities and foreign exchange last year, confidence in the government's policy management has declined (see our posts here and here). Brute policy interference with equity sales following the 2015 collapse of the credit-fueled stock market bubble has left in doubt the government's willingness to accept the volatility that accompanies market forces. (It also set back hopes that the equity market - which suffers from a range of fundamental weaknesses - would become a more effective alternative to credit as a funding source for new investment.) Similarly, uncertainty about the evolving exchange rate regime--especially after the August 2015 mini-devaluation - keeps alive doubt about the official commitment to greater market determination of the value of the renminbi (RMB).

So, what to conclude? For China to slow credit expansion and maintain the value of the RMB at the same time that it sustains adequate growth, the efficiency with which credit (and other sources of funding) are allocated will need to improve. That means cutting off inefficient state-controlled users of funds. It means cleaning up banks' balance sheets. It means making bailouts so unpleasant that neither borrowers nor creditors will rely on the government going forward. And, it means acting quickly enough to stem the flow of new debt before the debt burden leads to bank runs or capital flight.

This is a tall order for any government, but given the country's past successes, we are hesitant to say that it is beyond China's capacity. At the same time, because of the country's vastly increased importance in the world economy and the global financial system, the consequences of failure will be broadly felt, so everyone is watching. In that sense, this time really is different.