I don't know if it was sheer determination or utter stupidity that compelled me to sit through the three-plus hours of the second Republican Presidential debate. Viewing that spectacle followed by Hillary Clinton's appearance on The Tonight Show, led to a startling thought -- one of these individuals is going to be the next president of the United States.

While there is plenty of commentary to discuss the debate's winner and losers in what has become one of America's favorite sporting events, I was struck by a phenomenon that may prove to be a key indicator of this year's electoral success. There is a clear distinction between candidates that are looking to take America forward and those that want to go back to the way it was. 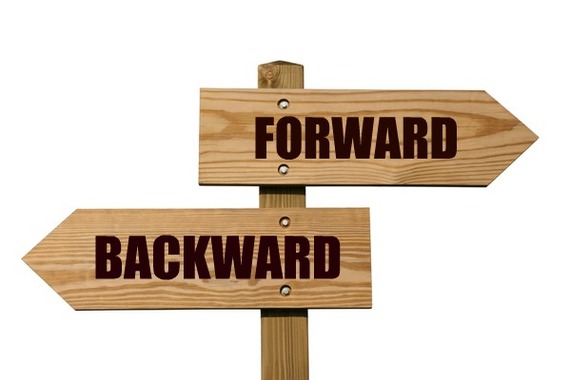 Rand Paul, Marco Rubio, Jeb Bush, Carly Fiorina, John Kasich and Chris Christie all expressed, at some point, views that revealed a sense of the interrelatedness in the world; that the United States must see itself as a part of a larger whole and engage with others, be they countries or immigrants, in a humane way.

In contrast, Mike Huckabee, Ted Cruz, Donald Trump and Scott Walker all fought to demonstrate that the United States stands alone and that ultimately, we are the only country that matters. (Ben Carson did not seem to exhibit a preference one way or the other as most of his statements stemmed from his experience as a physician.) The distinction between these world views will be important as we move forward in selecting our next leader.

What do we want? A recognition that our future success may hinge on international cooperation or a battle with others to achieve domination over a world that is failing millions of its citizens.

The United States was founded in the belief that we didn't want to be the subjects of a king. We wanted freedom, individual rights and the ideal of pursuing dreams without restriction. We created a new form of government and a nation unparalleled in its success of allowing millions to realize this vision. We have now come full-circle to a point at which we either must walk this belief with others who share our planet or build a fortress that keeps them from taking what we've created.

Do we move forward together or do we guard our treasures from those we fear will take them?

This is the ultimate question that will be answered in the 2016 Presidential election. And the first indication will come in the party's nominees. On the Democratic side of the fence the distinctions are there and reveal themselves differently.

By virtue of being "progressive" the Democratic candidates are future-oriented and tend to have a more collective policy approach. Their differences are revealed in how they propose addressing the issues. All three candidates, Hillary Clinton, Bernie Sanders and Martin O'Malley often use the term "fight," as in "I will fight for..."

This is where the Democratic candidates find a disconnect with the public as the idea of fighting is antithetical with a true commitment to living our interconnectedness. If you believe we are in this together then fighting anywhere is fruitless, as what you do to to others is what you do to yourself. If Democrats believe that we must move forward together to support the middle class, women, children, immigrants and all others who deserve to sit at the table of freedom and opportunity then we must stop fighting with each other.

Much will be revealed in the coming months as to how the Presidential candidates view themselves and their potential conduct as the leader of our country. Perhaps the most illuminating aspect of this question will be with us, the voters. Ultimately we have the government that reflects who we are as a nation -- and if the past eight years are any indication we are deeply conflicted about the direction in which we want to go.

Forward or backwards -- that is the choice before us in 2016. With clarity about what we want as individuals we will hopefully inspire that same clarity within the candidate that best reflects the qualities we desire. This belief is at the heart of our democracy -- that each person has the ability to choose wisely for themselves and others and will do so as voters in each election.