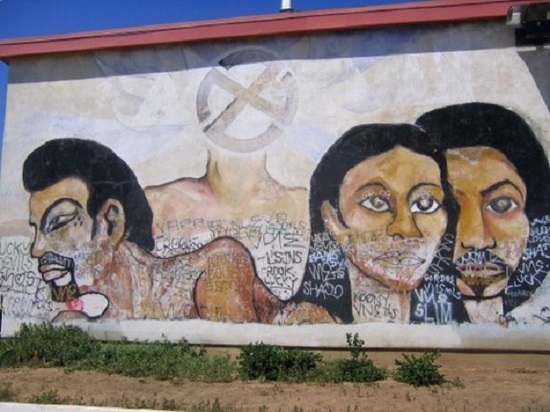 I've read different variations of the origin of the word "cholo." I read somewhere that it was an ancient pre-Columbian word, the equivalent to a mixed-bred dog or mongrel, and another that denoted a child born to Mestizo and Amerindian ancestry, where origin couldn't be placed. Either way, they both implied the same meaning and were used as derogatory. During the height of the Industrial Age where the railroad symbolized progress, several United States businesses in the Southwest encouraged Mexican migration for cheap, renewable, and returnable labor, so the Mexican government helped facilitate the process. In the early 1900s, Mexican male laborers were encouraged to travel north for temporary work and arrived via the newly constructed railroad lines. In Los Angeles, they settled in areas where other Mexican and Mexican Americans lived, "Sonoratown," near today's Chinatown, which was already criticized by social science researchers as a slum village where other degenerates lived such as Russians, Croatians, Italians, Poles, Chinese, Blacks, and Japanese.

Upon arrival they were looked at with disdain by the original Mexicans, the Californios, who lived in the developing city and had already started to adapt to the Americanization processes. Also, the Californios thought themselves of pure ancestry and looked down upon these Mexicans because they came from small Mestizo and Amerindian villages so they began calling them cholos to produce a division within their own ethnic enclave. Anglo settlers in the new city looked at them as backwards, rural peons and began calling them cholos as well, thus the Mexican immigrant developed a schizophrenic outlook. From their perspective, they traveled north for temporary work because U.S. businesses and the federal government, and the Mexican government wanted them to. Yet as they showed up in different towns and cities, they received a cold welcome. They emerged without children and wives because it was supposed to be temporary work, so the Californios referred to them as solo, and somehow combined it with the word cholo. It isn't difficult to see the internalized, self-conscious trajectory experienced in this psychological trauma and how this could produce extreme levels of low self-esteem.

Since Mexican laborers were paid poorly and could only afford temporary housing, many lived in shacks and housing court dwellings further from the core of the city along communities like Belvedere, Boyle Heights, The Flats, Maravilla, and the Hollenbeck districts where other minority groups and low-income Whites lived as well. However, other groups were overshadowed by the larger Mexican population and the popular media referred to them as "cholo courts" or the "cholo colony." Reformers throughout the city of Los Angeles looked at Sonoratown and these housing courts as the epitome of slum living and the antithesis of modern American progress. Social science research, photography, university research, and city journalism all focused on this crisis and produced a sensationalized school of thought to attack this backwards and intolerable way of life and thus the reformers would be looked at as the saviors of new urbanism. Therefore, they declared a "war on the cholo colony," and systematic efforts were put in place to eradicate the people from there, demolish the courts, and demonize the way these people lived across the city. Over time, it began to spread to any area where many Mexicans lived like Highland Park, Lincoln Heights, Pico-Union, Lennox, Mar Vista Gardens, and many others. As we can see, the war against the cholo colony has really been a war against the Mexican, the laborer, the immigrant, and the poor person, and there's no end in sight. And for the first time in Los Angeles' history, these same people that declared the war are now interested in living in the cholo colony.