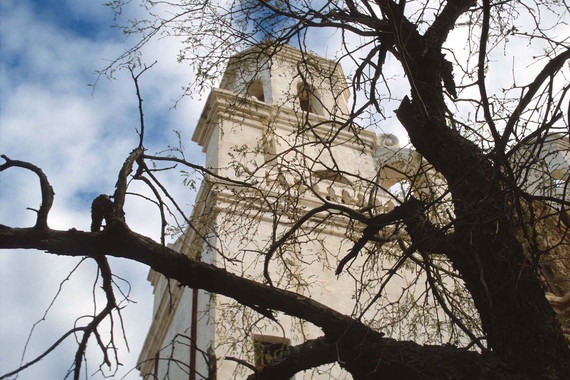 In other words, you and I may experience Christ but we could never explain Christ. When you try to explain what God has done in and through the Eternal Christ...

That's when it gets complicated and mostly just plain wrong. Furthermore, when you rely on the old explanations from our past, you will almost always come up woefully short and/or wrong again.

The Explanations of Christ

Which is the plight, and peril, of Christian theology throughout Christian history.

For all the good, for example, the seminal mind of John Calvin produced with his incredible mind Institutes of the Christian Religion, one could point to an equally confusing, and ultimately divisive, consequence of his propositionally-laden explanations of the Christ experience.

If you do not know what I'm talking about, consider yourself lucky. No one has ever needed Calvin's explanations of Christ to experience the Christ of eternity.

The books of the Bible were written between 1000 BCE and 135 CE. Which means, the authors of what Christians still regard today as the sacred writings of the Old and New Testaments believed in a three-tiered universe, thought the earth as the center of the universe with the sun rotating around it, regarded sickness as a sign of God's disfavor and wrongly but passionately believed anything they could not explain must surely be a "miracle," as Spong and others have helped us to understand.

We know better today than to believe any of this. Or, do we?

Many believers, for instance, who claim to be faithful followers of Christ mistakenly think that "faithfulness to Christ" is only ever demonstrated by defending old, worn out explanations of the world, God, as well as the human experience. They argue almost incessantly over inconsequential things and act as if they are watershed beliefs. It is hard to believe but there are Christians who still say absurd things like "The Bible is infallible!" whenever it speaks about anything...whether science, evolution, the human experience, psychology, biology, astronomy, etc.

Really? Do they actually think that by telling people Genesis is a factual account of how the world came into existence that they are being "faithful" to Christ?

But I do not agree that they are being faithful at all. In fact, to still be trying to defend "infallibility" borders on ridiculous, even arrogant and willful disregard for the truth. Rather than drawing people to Christ with their groundless beliefs, they only ever succeed in leaving potential converts with no option but to outright reject Christianity as some antiquated belief system, even a useless relic of the past.

Is that really what they want? Do Christians really believe this is being faithful to Christ?

Personally, I think there is a better way. And, it is one infinitely more faithful to Christ, too.

The way is to let go of the old, worn-out explanations of God, Jesus, the Bible, the universe, how humans evolved, what went wrong with humans, creation, evolution, and so forth. This is the first way of authentic faithfulness to Christ and what's really important in Christianity - the Christ experience.

In other words, rather than regarding everything we are learning in our rapidly changing world as suspicious or worldly or, worse, as being unfaithful to Christ, they should question everything instead.

I suggest even, start by questioning your own beliefs. If they prove to be antiquated and contrary to what we know today, let go of them. Why would you continue to cling to them? Staying attached will only ever produce a insufferable inner dilemma for which there is no resolution or peace. Your mental, emotional, and spiritual health cannot be separated from your willingness to embrace truth, however threatening you may feel it to be. If what you question proves to be true, then the truth must be embraced.

A second way to be faithful to what's important in the Easter story is to be content to invite people into the Christ experience not into a belief system that's all about how you explain Christ. It is not an explanation of Christ that is the source of the Easter magic. It is the power of the Christ experience that changes human lives. Experiencing Christ always defies explaining Christ.

It always has and it always will, too. What will NOT abide are all of our explanations, antiquated beliefs, and things like the Institutes of our theological explanations. These are those things that become relics. Why? Because explanations could never be equal to experience.

There is much about the Church today, as well as the beliefs Christian people argue and debate over almost endlessly, that must die with Jesus this Easter season. But, not just die with him, they need to remain in the grave forever.

It is only ever your experience of Christ that will live beyond the cross and the grave, isn't it?

What else but the experience of Christ HAS ever survived? Isn't this what we call the resurrection?

As far as I'm concerned, you can take all the explanations of what God has done in Christ - including my own explanations - and, bury them forever.