When Ronald Reagan began courting the religious right in his bid to win the Presidency, I doubt he knew he was spelling death to the lean tenets of Goldwater conservatism. Yet soon afterward, under the thumb of right-wing religion, the Republican party became a bloated fool, stuffed with hypocrisy, greed, and anti-intellectualism. In 2008, the price is being paid through lost elections and a loss of public trust.

While Bush railed about the axis of evil, there was another axis that gathered steam during the Reagan years. The Moral Majority, Focus on the Family, and The Christian Coalition were all formed within years of each other as religiopolitical groups. Jerry Falwell, James Dobson, and Pat Robertson, the respective leaders of these movements, formed a triad that sought to influence politics through a gospel of neo-conservative Christian rhetoric aimed at millions of faithful adherents whose votes, it was hoped, could swing the socio-political pendulum away from progress and back to "traditional values."

In order to win the votes of the triad's faithful followers, Republican politicians bartered themselves into a hear-no-wrong, see-no-wrong trade-off. This trade-off allowed Falwell to hold sway with politicians, and appear as a respected political pundit on right-wing shows, even after outlandishly insisting that the purple Tinky Winky children's character was gay, or that the anti-Christ was coming in the form of a Jew. He could promote the idea of ending the public school system in favor of church-run schools, as he did in his book, America Can Be Saved, yet still wield considerable influence in Washington.

In trading endorsements for blindness, Pat Robertson could say that feminism "is a socialist, anti-family, political movement that encourages women to leave their husbands, kill their children, practice witchcraft, destroy capitalism and become lesbians" -- and even suggest that a nuclear device should be used to blow up the State Department -- yet Senators and other politicians would still appear on his CBN network, even after other controversies, such as the use of Operation Blessing planes for mining activities, splintered his Coalition.

Republican politicians continued to cater to James Dobson even after he distorted the research of scientists to promote his anti-gay agenda in Time magazine. Dobson, who operates several non-profits, has used millions in tax-free donations to try to influence nominations for the Supreme Court and to subvert the First Amendment separation of church and State, but legislators, rather than reining in the 800-pound gorilla, quaked under threat of being targeted by Dobson's political media machine.

There was a mutuality to the trade-off between the Christian right and its adopted Republican politicians. In exchange for being given credibility and influence in Washington, the triad and their various branches would justify the intrusive Patriot Act, torture at Guantanamo Bay, and massive governmental debt to their audience of millions -- if politicians would stand against Roe v. Wade. They wouldn't make a stink about outrageously expensive no-bid contracts -- if it meant that their "faith-based" charities could get governmental grants. They would support war against a country that had nothing to do with 9/11 -- if politicians went on the record against same-sex marriage.

The would ignore or excuse the fact that a large percentage of corporations paid no taxes at all -- if it meant no new taxes for them. They'd support Bush even as he misled the public about weapons of mass destruction, and they'd excuse the unethical actions of henchmen like Rove and Libby -- if it meant that school vouchers would be put on the agenda.

Working in tandem with their pocketed politicians, the Christian right would rejoice at the FCC's repeal of the Fairness Doctrine, which gave rise to a slew of unchecked right-wing programs that hawked the myth of a vast "liberal media", even as markets narrowed and became dominated by a handful of corporations.

Right-wing provocateurs like Ann Coulter and Rush Limbaugh were encouraged to truck in fear, loathing, and controversy, mirroring the religious right's mission to divide the country into red/blue, good/evil, conservative/liberal, Christian/un-Christian factions. There was no room for the moderate middle in this "with us or against us" equation, as witnessed by the public shredding of moderate Republican politicians like Arlen Specter, a Jew, and a vocal critic of the Christian right. "What some are trying to do is take over the party," Specter warned in 1994. "That's bad for the Republican Party and bad for the country." Specter became a target of the religious right for his support of Roe v. Wade, and his refusal to bend to the will of religious power brokers like Dobson, who attempted to use his influence to block Specter's 2005 bid to become chairman of the Senate Judiciary Committee. 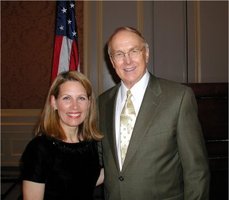 Today, Sarah Palin and Michele Bachmann are among two of the more prominent Republican figures that have become mouthpieces for the religious right. Their attempts to split a diverse, multi-cultural country into "pro-America" and "anti-America" factions have left little doubt who is to be considered patriotic and who is not.

Those who are right-wing Christians -- anti-abortion, anti-feminism, anti-gay, anti-evolution, anti-taxes, pro-gun, and pro-deregulation -- and who are willing to ignore or justify massive governmental debt, corporate welfare, bank nationalization, unjustified war, falling markets, depleted retirement accounts, record foreclosures, government spying, broken treaties, torture, the impingement of a free press, the subversion of the First Amendment, the hiding of official records, the missing millions from Halliburton, and more - are patriotic. Everyone else is not.

Barry Goldwater once said that he was "sick and tired of the political preachers" that tried to dictate his morality.

"And I am even more angry as a legislator who must endure the threats of every religious group who thinks it has some God-granted right to control my vote on every roll call in the Senate. I am warning them today: I will fight them every step of the way if they try to dictate their moral convictions to all Americans in the name of "conservatism."

Goldwater, I think, would be rolling in his grave at the hijacking of his party by religious fundamentalists. It remains to be seen if the Republican party can recover from its long and seedy affair with the extreme right, but there is no doubt that many socially moderate, fiscally conservative Republicans are waiting for a leadership that is driven more by Goldwater ethics than by the bogeyman of a separatist, neo-con God.

See The Latest Photos As Hurricane Ian Slams Into Florida

Woman Was Forced To Give Birth Alone On Maryland Jail Floor, Lawsuit Claims

Thanksgiving Could Cost An Arm And A Turkey Leg This Year