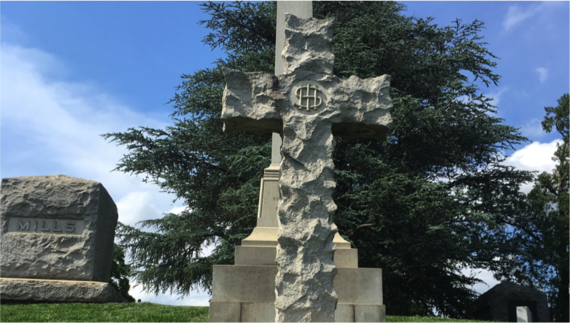 Many people may be surprised to learn how easy it is for religious groups to lobby politicians. In 1970, there were roughly 40 groups in Washington D.C., now there are over 200. As of 2011, according to Pew Research, these groups employ at least 1,000 people annually who live in the D.C. area and spend more than $350 million a year.

The report goes on to say, "More than eight-in-ten of the 216 religious advocacy groups in the study (82%) operate as nonprofit, tax-exempt organizations under Section 501(c)(3) of the Internal Revenue Code. This means they are not allowed to devote a substantial part of their activities to lobbying as defined by the Internal Revenue Service." Since they have no oversight, however, these activities slide under the radar, and there is no working definition of "substantial" by the IRS.

Many of the larger organizations, such as Focus on the Family, create sister organizations under the 501(c)(4) status, which they can legally fund. Citizenlink is Focus on the Family's sister organization. 501(c)(4)'s were established around a century ago as "social welfare" non-profits. Kim Barker says, "The IRS later opened the door to some forms of political activity by interpreting the statute to mean groups had to be 'primarily' engaged in enhancing social welfare." Like 501(c)(3)'s, how "primarily" is measured is vague. Barker notes, when Citizenlink granted $120,000 to another 501(c)(4), the Susan B. Anthony List, to criticize Democrats in a television ad, they didn't count it as political spending on their tax return, though they are credited in the ad for part of the funding. 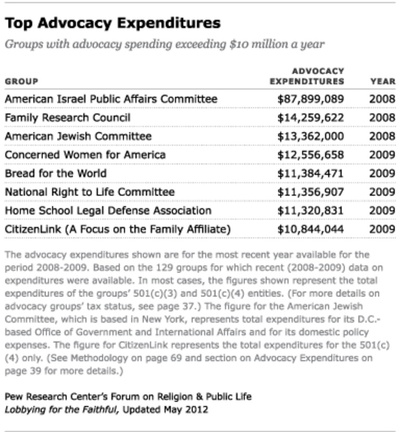 Much of the lobbying that goes on from these church organizations is undisclosed. For example the National Association of Evangelicals represents "40 denominations and thousands of churches, schools, nonprofits, businesses and individuals." Pew Research found that "lobbyists tend to employ at least one of eight advocacy methods. These methods include informing constituents (41 percent of groups say this is their most frequently used strategy), meeting with officials (15 percent) and letter campaigns (10 percent)."

Religious organizations are powerful political machines, and well funded. In 2012, Focus on the Family reported nearly $91 million in income with nearly $52 million in net assets. Pat Robertson's Christian Broadcasting Network reported over $533 million in total ministry support and revenues. Robertson's other organizations include Regent University, the American Center for Law and Justice and Christian Advocates Serving Evangelism. Those organizations, as of 2010, were operating on budgets of a collective $117 million. In 2015, Robertson's American Center for Law and Justice reported income of almost $17 million. Jerry Falwell's, Liberty Counsel, is now exempt from reporting their income at all.

The Liberty Counsel famously made Rowan, Kentucky, County Clerk, Kim Davis, into a household name. Davis was advised to violate the law and refuse to issue same-sex marriage licenses. She was thrown into jail while Liberty Counsel moved into the spotlight, rallying both moral and financial support. It wasn't the first time they used a defendant to advance their anti-government agenda. Liberty Counsel is famously seen as a hate group. "Liberty Counsel 'regularly portrays gay people as perverse, diseased pedophiles putting Western civilization at risk,' and in doing so it is 'way, way over the line,' Mark Potok, a senior fellow at the [Southern Poverty Law] center, told the AP."

The problem is that these groups don't simply have a difference of opinion. They wrap bigotry in religious freedom bills designed to discriminate against certain segments of society. Their arguments are devoid of scientific evidence and facts. They believe they are speaking for God, which makes them especially dangerous.

Certainly all people should have a voice in a democracy. Demonizing and oppressing other groups with whom we disagree to get what we want, however, is not godly; it's certainly not Christian. These groups have learned to manipulate their constituency, and to play on their fears to raise money and support. The Christian-political machine is undermining the system and using suspect means to do it, while standing on the backs of people who need a voice the most.