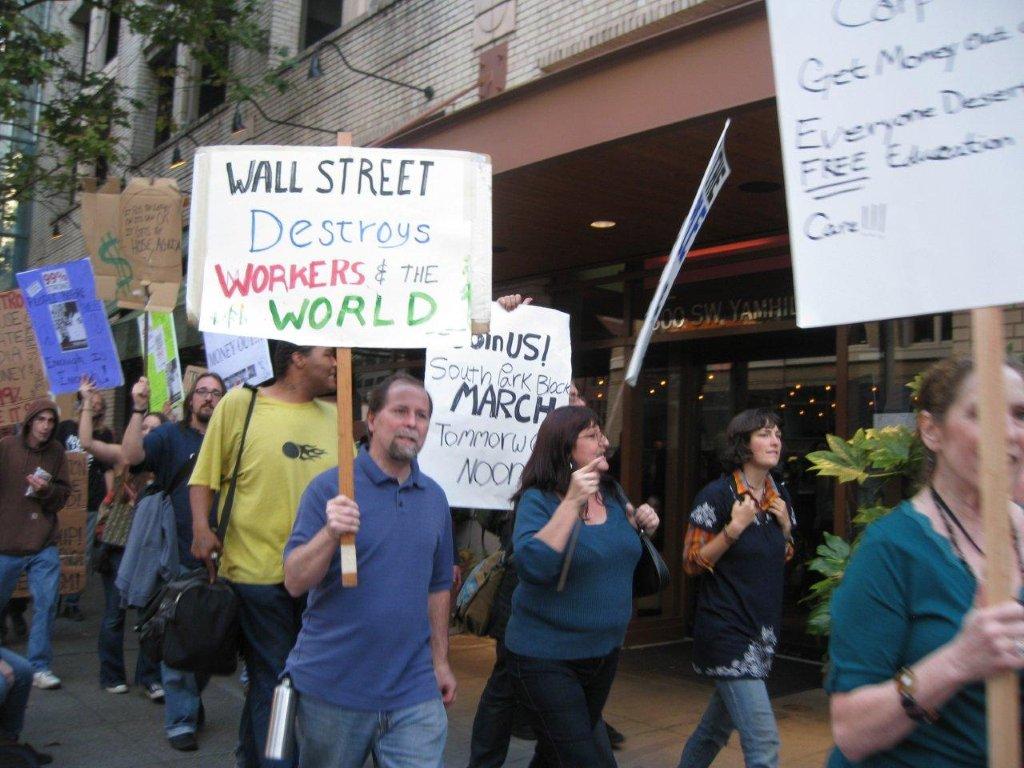 I'm waiting to see what the religious response will be to OccupyWallStreet, which is a true revolution of the people. It is a cry from people who have been abused far too long by those who hold economic and political power. It is a cry for justice and compassion. It is a demand for responsibility from our elected leaders. What will the established churches say in response?

Most likely, not very much, if history tells us anything.

During the abolitionist movement of the 19th century, most churches were "gradualists," saying that, yes, slavery was wrong, but social change takes time, and we should just let slavery die out naturally. Religious leaders didn't want to disrupt the economic system that supported their churches, and they certainly didn't want to introduce conflict into their institutions, which might result in a loss of both membership and financial contributions.

During the civil rights movement, black churches were heavily involved, of course, but mainline Protestant churches remained firmly ensconced in the status quo. The same thing held true during the Vietnam War. Most clergy who spoke out against the war were not leaders of congregations : they were chaplains (William Sloane Coffin) or Catholic priests (the Berrigan brothers) or administrators (Bishop John Shelby Spong). While young people flooded into the streets in protest, getting beaten up and jailed by the establishment, churches were mostly silent.

The OccupyWallStreet phenomenon is a true prophetic moment, and it should be the subject of sermons all over this country. But I suspect it will not be. Sermons will continue to be preached about saving souls, giving generously to the church itself, and avoiding the usual temptations of the flesh. The systemic sins of the culture will not be addressed, except by a few bold and isolated preachers. Why? Because the churches of this country, like all middle-class institutions, are more interested in the protection of the institution than in the prophetic message of Jesus.

Who are the people marching in the streets, with colorful signs, in such great numbers? These protesters simply feel that they have no alternative. Business and government have acted in lockstep and have refused to listen to those whom they should be serving. OccupyWallStreet is a coalition of people who have lost their jobs, people who have lost their homes to the bank, young adults for whom there are no jobs, people of all ages without health care, environmentalists who see short-term economic gains trumping care for the planet, veterans who doubt that our current wars are worth it, and concerned citizens of all stripes who have looked askance at our dysfunctional Congress, and have finally said "enough is enough."

Some of these people go to church, I expect. But they cannot take their grievances to the church. They would not feel it appropriate, most likely. They may say to their church, "I can't find a job," or "I am depressed," or perhaps they can go to the church food pantry and get a basket of groceries. But they cannot ask the church to stand with them against the powers that be--the banks and their political lackeys--who sold out ordinary citizens.

It is no wonder that more and more people in this country identify as "unchurched" in national polls. When churches and ministers refuse to be involved with the real pain of real people, and have as their main mission maintaining their institutions, they lose their relevance. They have no prophetic voice. And without a prophetic voice, what is their purpose for existence? They become just another social organization to provide a gathering place for their members.

Churches are not allowed to participate in partisan politics, lest they lost their non-profit status. But they can and should be involved with political issues, because politics determines how the economic pie is divided--and that becomes very much a moral issue. When ministers speak out against systemic sin, they risk losing financial support, it is true. Congregants who benefit most from the economic status quo may leave and seek safer ground. But the integrity of the message will draw many others, in greater numbers.

The church's proper role is to stand on the side of the disenfranchised and to call out wrongdoing and injustice in our society. Jesus did not say," I have come that you might be comfortable." He said, "I have come that you might have life." OccupyWallStreet has given the church an opening, a decisive moment in history. The Holy Spirit is not on the side of safety and stability. When will the church find its prophetic voice?