Last weekend, I participated in a Ragnar Trail Event in Zion, Utah. It was a beautiful spiritual experience, though you might not think about running or racing as "spiritual." As a team, we contemplated the vastness of the universe and our own individual smallness, shared space with total strangers who were bound together in the same purpose, poured our hearts out in a way perhaps you never would unless everyone was just as dirty, tired and sunburned, and witnessed the beauty at the top of the world, looking down where we had come from, and then returned home filled and feeling blessed.

Last year at the same event, we experienced torrential rainfall not quite halfway through (as night fell) and the event was "put on hold" until morning, when it was cancelled. It was memorable, I suppose, though pretty miserable. At the diner we found on the drive home, our starving team devoured platefuls of food and chatted about what we had learned about ourselves. I had been woefully unprepared for adverse weather conditions and had been soaked and spent much of the night shivering wet. I felt defeated by nature itself, crushed under the freakishness of the snow, hail, and sleet at that time of year in southern Utah. Though I had only run 4 miles, I went home as exhausted as if I had run a marathon and fell into a bit of a funk, not feeling particularly inspired by the experience.

This year was very different, and not just because of the sunny weather. Above 90 degrees both days, I got a nice sunburn in reward for planning for rain and not thinking about sunscreen. But what I felt in the middle of the athlete "village" as it was called, was a spiritual high that I had also not planned for. Instead of wanting to get back home quickly on Saturday night, I found myself wanting to stay another night because even if I had not learned a single name of another athlete, I felt as if I had found "my people."

This year, I've heard several presentations on the Pew report about the religious habits of Americans. Mormons are losing members at a higher rate than ever before, but this is probably just a reflection of what all religions are experiencing. And while atheism is rising, what is rising more than any other group is simply the "unaffiliated." These people who have left formal religion do not necessarily feel less spiritually connected to God. They pray and believe in heaven, but they don't connect their spirituality to church buildings, to prayer services, or to religious rituals performed under roofs.

What I felt as communion with God under the open sky was what I suspect many who were there also felt -- that we were part of a new spiritual experience, not any formalized church with any one person designated to sermonize to us, but the "Church of Running." We sat together in our pews (made of camp chairs and tents) under the open sky and heard the voice of God in the sound of the wind, the chirp of birds, the silence of the beating sun. Our sacrament wasn't broken bread and wine, but electrolyte water or Gatorade and sports gels and recovery drinks.

I admit, I had never run in the dark on a trail before. I forgot to bring a head lamp, but had no intention of being stupid enough to try to run without one (even if it wasn't against the rules). I borrowed from one of our team members and was glad that I had run this course the year before in the daytime, so I knew at least a little bit of it. It was one of the most amazing hours of my life. A few people passed me from behind, their bobbing lights alerting me to their presence so that I could step aside. But most of the time, I felt completely alone. My headlamp was a twin to the stars in the sky above me, and the silence and solitary sense was profound.

There was a long section on the course I was on where I was aware that the left side of the course was a drop off. I didn't know how far down it went because my lamp didn't show me that far. I did know that falling off there would be -- bad. Several times I tripped and nearly went over because the footing was difficult, with tree roots, rocks, and hills adding to the challenge of running in the dark. Yet I didn't fall. When I made it back to camp, I felt an overwhelming sense of gratitude, that I had been safe, that I was able to sleep now, and that I was part of this community.

Not everyone had the same blessed experience on the trails. There were many injuries, many runners who were not able to complete their three loops. One of the members of our team told about a woman she had run most of her loop with who suddenly went down and couldn't get to her feet again. She saw the other woman's ankle swelling dramatically, and felt horribly guilty. Had their casual chatting distracted the woman and made her fall? She ran down the rest of the course as fast as she could to find medical personnel to help, then realized afterward that she didn't know where the team was camped and didn't know how to find out if the woman was all right. This sense of responsibility for our community reminded me very much of the ways that my church community looks out for each other and wants to help and to keep track of each other.

The final moment of our team race was when our team captain finished the final 8 mile loop for another team member who wasn't able to do it. He ran all of his own sixteen miles, plus four miles with another runner as a pacer, and the anchor loop. When we saw him coming down the finishing shoot, we all joined him for the last 100 meter sprint, cheering him on and exulting in this final moment together. We had spent the hour before that watching team after team do the same thing, join together as families in a glorious finish, many of them dressed in costumes (like the Star Wars team), many carrying children on their shoulders for the last meters, some in matching T-shirts with their team name emblazoned on it.

If there is anything like a family reunion in heaven, then surely it feels a lot like when each of us on the team "Sweatpants Avengers" as we returned from our individual loops, cheered on by our teammates, waiting their own turn with the bib number, until we could all meet together again to run that final stretch of trail. Surely heaven cannot be any sweeter than our team photo with our matching medals and T-shirts or our walk to the cars, sharing our favorite parts of the weekend, or the decadent meal we shared afterwards of burgers, fries, and shakes. I'm proud to be part of the "Church of running," even if it was only for a weekend. 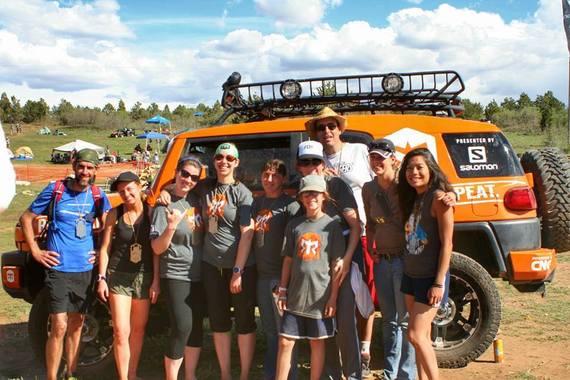