On Monday October 29, 2012, with storm warnings brewing on the news, Iwan Baan boarded an overnight plane from Europe to New York City. He had heard about the monster storm that was racing up the Northeastern shore of the United States and gaining speed by the hour. As he left the safety of Amsterdam, flying toward the hurricane, he was already mentally preparing himself to meet the storm head on. An assignment for the Parrish Art Museum was taking him to NYC on business. But it was the storm that was drawing him in inexorably. 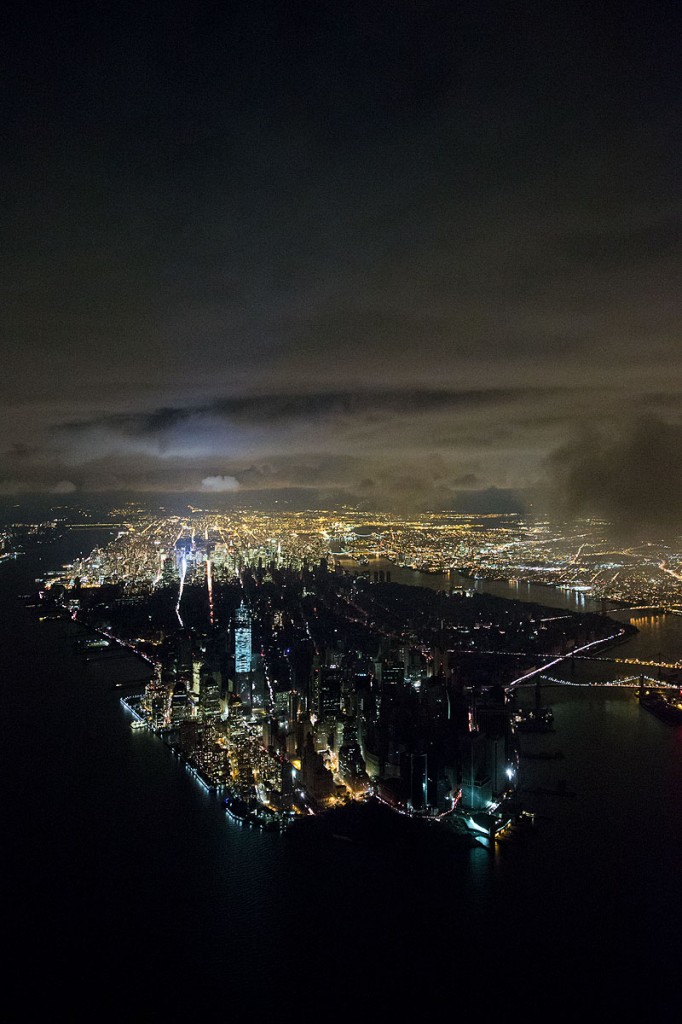 The City and The Storm

Baan is no stranger to disaster. From Tokyo to Haiti, Iwan Baan has pursued the story of human survival in the wake of natural disaster for years. Baan knows stories and drama emerge at a time when people are challenged to their core. And with a compassionate and optimistic eye, he has been there to capture the resilience and transcendence of humanity in the face of overwhelming challenge. He will do anything to capture his picture. From chartering helicopters where none exist, to strapping himself onto hot air balloons in China where private aviation is illegal, Iwan looks for the big view; the highest and widest perspective of humanity caught in its dwelling places, and sometimes in the wake of their destruction.

Baan checked into the Washington Square Hotel in Greenwich Village, settling into his room on the 10th floor, jet lagged after the long flight. Calling in to his contacts at the Parrish Museum, it quickly became clear that nothing was going to happen until the storm had blown over. The city was shutting down. Roads and bridges were closing. Businesses were closing. The city was going into lockdown in preparation for nature's onslaught.

All day the newscasters and weathermen were buzzing on television screens throughout the Northeast, chattering about the monster storm gaining momentum as it barreled up the coast relentlessly. They promised torrential rains, lashing winds and record flooding from Chicago to the Atlantic Ocean. As the sky darkened and a full moon was rising, the final landfall was anyone's guess before the hurricane would take its fateful turn into New Jersey.

Baan had been in Tokyo in the aftermath of the earthquake and Fukushima disaster in December of 2011. He was familiar with what disaster wrought on a functioning city. Nothing works and nothing is available. So Baan prepared; prepared to take his shot, to capture the historic moment, to witness the impending tempest, to document what fate would wreak on the city. It is his passion and his drive, his personal vision and compassion to witness and give voice to the fragility of humanity. And what is more fragile than a sparkling city in the direct line of fire?

As some residents were leaving the city, others were preparing themselves to hunker down for another squall. And Baan went into action. He visited every ATM in his surroundings and withdrew as much cash as he could, because he knew money is the first thing needed in case of an emergency. He called Hertz and reserved a rental car, in case mobility was going to be an issue in the wake of the storm. Whatever it took to get the picture, he was determined to have the resources he needed to capture it.

On the night of October 30th, fueled by the rampant tides of the full moon, the storm hit and pummeled the city relentlessly. Within hours, torrential flooding overtook a wide band of the city, deluging the core, from east to west, submerging Manhattan from the East Village to Chelsea.

As Baan waited out the storm, the power went out in the hotel and across wide parts of the city. By morning the storm had lashed and beaten the city relentlessly. In the night, fires had raged amidst the flooding in Breezy Point, devastating homes and taking lives. Chelsea and its galleries were underwater. There was no telephone service. There was no internet. And no elevator.

Early in the morning Baan made his way down the 10 flights of stairs of the hotel to emerge into the post-storm devastation, to capture the aftermath of the hurricane.

A small transistor radio set up in the lobby of the hotel was the only source of information available. Baan walked into the streets to find communication and transportation. Before he ever landed in Manhattan, before the storm ever made landfall, he had already planned to rent a helicopter, the way he always did, to take his iconic aerial shots of the city.

But to get a helicopter under these circumstances would require phone service and there was none to be found. Public transportation wasn't working. He began to walk, searching for reception, searching for a phone. People were walking the streets, looking at the deluged city, still hopeful that the power would be up soon and that things would return to normal.

Some had heard that the bridges were closed and there was no way getting off the island. The city was crippled. Manhattan was cut off from the world. 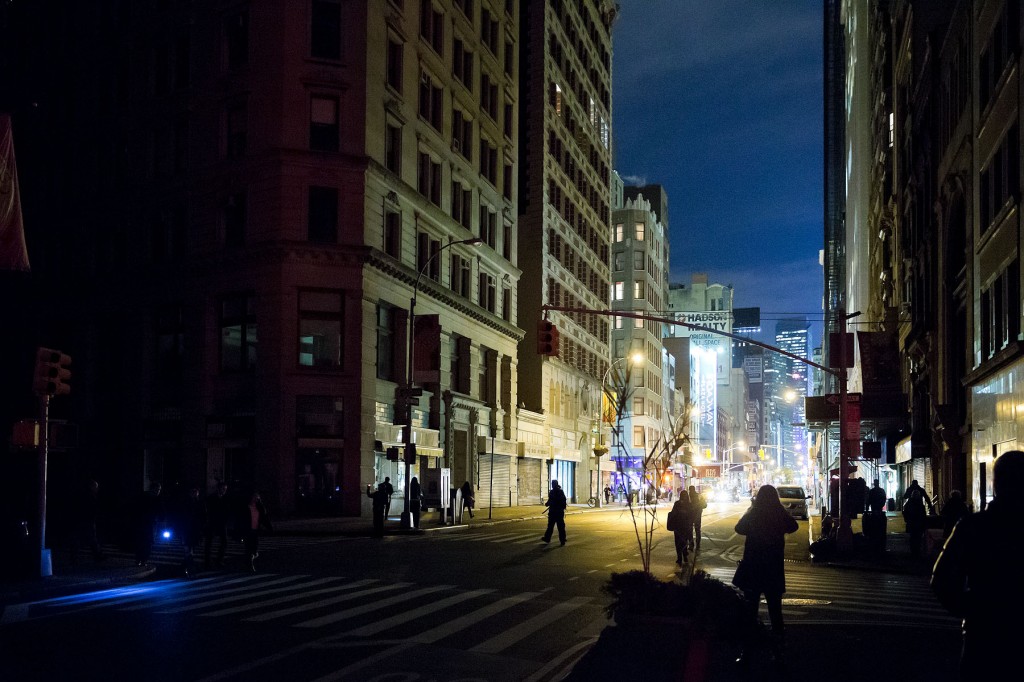 Stores were closed. Restaurants were closed. Baan walked and walked until he found a place with cell reception. His first call was to his family to let them know he was okay. His next calls were to every helicopter pilot he knew in Manhattan. Five times he reached pilots he knew, and five times the answer was the same. "Can't get out." They had no fuel, pumps weren't working, the chopper was in the hangar, and, with no electricity, they couldn't get the hangars open to get the helicopters out.

Finally he reached a pilot in Ronkonkoma, Long Island. He had a chopper sitting at McArthur Airport, all fueled up, and he was willing to fly. "I'll take you out," he told Baan, "but you've gotta come to me, and don't come with a credit card. The machine isn't working." Baan would have to make the long drive to get up in the air. So Baan's next call was Hertz. He would need that car. But Hertz had no more cars available. None of the cars had been returned. Seven locations and not one had a vehicle to rent. Time was running onward. Baan wanted to get to that chopper to get his picture. Clouds were still thick over the city and he knew there was a narrow window to capture what had happened as it was still truly happening. After pressing the agent for something, anything, to drive, Baan was told there was one single car at JFK. But instead of the $300 he was quoted, it would now cost him $2,000 to rent. Done. Baan set out for JFK.

There was no public transportation and taxis were impossible to find. It took hours walking the streets, searching for a ride, before Baan found a taxi that was willing to take him to the airport. Five hours in the cab, picking up stranded hitchhikers on the way, the cab driver complaining every minute of the way about the traffic, about the fare, about how long it was taking and the loss he was incurring by the ride to the airport. Baan finally made it to the Hertz counter at JFK and got his set of wheels.

With all of his belongings in the car and his new Canon 2 DX at his side, Baan set out to Long Island to meet his pilot and finally get into the air. As the rain slowly ebbed and a breeze was opening the sky and parting the clouds, Baan raced to the only hangar on Long Island with a chopper standing at the ready. On the road he made calls to New York Magazine, telling them he was about to take a picture that might be an important document for the magazine and the city. The next issue was closing by midnight and Baan was told that if he could get a picture to them before the deadline they would be interested in running it. Now it was all just a matter of time.

Baan finally arrived in Ronkonkoma, walked into the dark office of the pilot, and laid down his cash. By now the sun was setting and the light was fading fast. They boarded the chopper and lifted into the air, heading toward the city as the pilot shook his head, incredulously, saying, "I don't know what kind of a picture you think you're gonna take in the dark over Manhattan."

As they neared the city, Baan could see the real devastation for the first time. A dark black band divided the city into two, as though its core had been swallowed by the abyss. Baan pressed the pilot to ask for as much altitude as air traffic control would give him. Flights were grounded and nothing except for Baan and his helicopter were in the air for a straight hour. On any ordinary day, helicopters are limited to flying between one and two thousand feet to stay out of the way of commercial air traffic. This time, Baan asked for three, four, five thousand feet. And air traffic control let them have it all. For an unprecedented moment the sky was his alone, and Baan flew over the city unimpeded, to capture what he could have barely imagined on the ground.

What he saw was incredible. The grid of lights defining the city, the dark band slicing the city in two, completely black, with only silhouettes of buildings offset against the lights of uptown Manhattan. Parting, brooding clouds were glowing with eerie reflections. Stars were visible in the clearing sky. The city looked surreal. Cut in half, swallowed in darkness.

The City and The Storm

Baan took as many pictures as his hour allowed, documenting every part of his singular witness of this singular moment; the always indomitable Manhattan suddenly rendered fragile, disabled by the storm. With the New York Magazine issue closing, Baan headed back to Ronkonkoma and got into his car to race back to Manhattan to get his first look at his images and to edit and select the right one for the cover of the magazine. Later that night Baan delivered the iconic image: "The City And The Storm," also the title of the magazine article. Overnight the image went viral on the internet.

Baan had accomplished what he set out to do. Like a hunter, he had captured the city, and the indelible moment in its history. 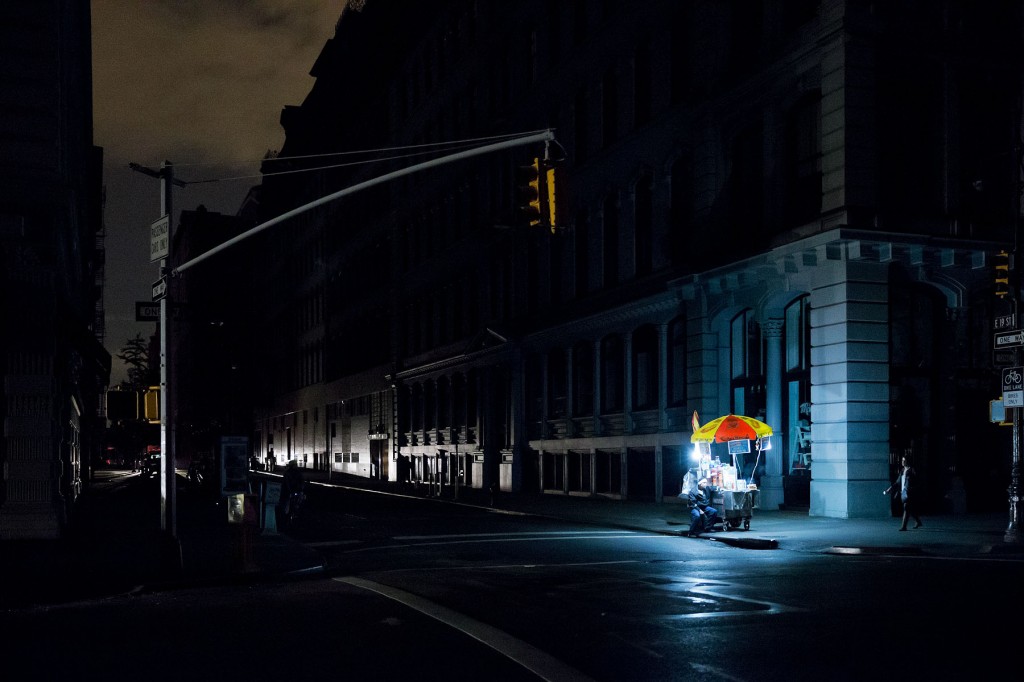 But it wasn't enough and it wasn't all that he had wanted. Seeing the devastation, he was overcome with a comprehension of the totality of the disaster, the sense of the absolute fragility of life on this wild and stormy planet, and the suffering and damage this storm would bring to untold lives. Believing that images can do more than reflect reality, Baan was overcome with a strong desire and conviction: that his image, the one he had fought so hard to attain, would also make a difference in the world. And in this moment, through his singular vision, his dream for disaster relief for Manhattan through the power of his iconic image, "The City And The Storm," was born. And Iwan Baan, with his humanitarian vision and perspective, had a new quest to follow...

All images are courtesy of Perry Rubenstein Gallery.