UPDATE:
The Smoking Gun reports Nevan wanted a blow job and offered to pay for it in oxycontin:

Donahue, driving a Jeep Cherokee, was searching for some strange one Monday afternoon when he approached a female cop posing as a hooker. Donahue, wearing a "white cheetah shirt" and blue jeans, wanted some oral sex. And he offered to pay for its provision with Oxycontin, the powerful painkiller. As noted in a handwritten addendum to a probable cause affidavit, undercover officer Lori Colombino reported that when Donahue approached her, his belt was unbuckled and his pants were unbuttoned and unzipped. This resulted in the exposure of his "shiny black underwear."

PREVIOUSLY:
"The City" has only aired for two weeks, but already the sketchy legal history of one castmember has been unearthed. Costar and self-described "social" Olivia Palermo's cousin Nevan Donahue, who brags about getting a ticket for spitting in the subway in the most recent episode, had a incident with a prostitute:

According to the clerk at the Palm Beach Courthouse, Donahue, 28, has a warrant out for his arrest for failing to meet terms of his probation after he was busted last year for trying to pick up a prostitute. Donahue, the ostensibly straight cousin of uptown "social" Olivia Palermo, was given probation and told to complete 75 hours of community service after being arrested Feb. 27, 2007, while trying to solicit a hooker in West Palm Beach. A warrant was put out for Donahue's arrest last August after he failed to put in the hours. A rep said Donahue, the son of an art dealer, had no comment. A spokeswoman for MTV tells Page Six, "We had no knowledge of his arrest."

Below are Nevan with his spitting ticket and his 2007 mugshot. 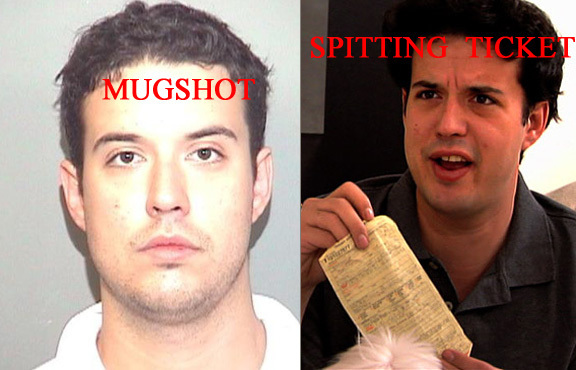