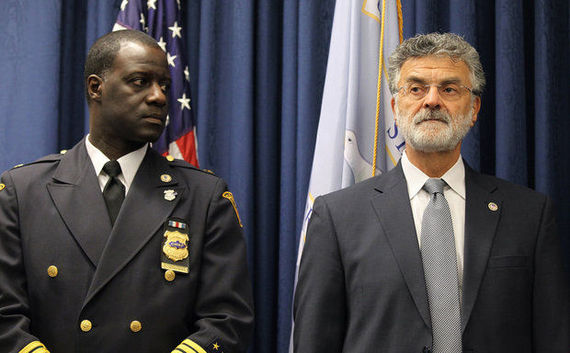 After two long years, the Cleveland Police Department has a consent decree, and not a moment too soon.

The DOJ consent decree, issued this week, comes on the heels of Cuyahoga County Common Pleas Judge John O'Donnell ruling that Michael Brelo, 31, a white, Cleveland police officer, acted within his constitutional rights in the November 2012 deaths of Timothy Russell, 43, and Malissa Williams, 30, two unarmed black occupants in a vehicle.

According to Judge O'Donnell, "Brelo's entire use of deadly force was a constitutionally reasonable response to an objectively reasonably perceived threat of great bodily harm from the occupants of the Malibu, Russell and Williams."

Interestingly, the Justice Department's report said that "Cleveland police too often used excessive force..." However, Judge O'Donnell went on to state that, "he would not sacrifice" Brelo to an angry public if the evidence did not merit a conviction.

Well, I'm not a judge, however, something about 65 police cars involved in a pursuit caravan which also included 104 officers and 137 bullets fired seems just a little bit much to me.

Although 13 officers fired at the car being pursued only Officer Brelo faced criminal charges. Brelo's attorneys successfully argued that other officers also fired their guns at the end of the chase and that prosecutors could not prove in which order the fatal shots were fired. Russell and Williams were each shot more than 20 times.

Timothy McGinty, Cuyahoga County prosecutor, told reporters during a post-verdict news conference that the case had been "challenging." Perhaps if McGinty had charged every officer who fired their weapon rather than just Brelo, some of those challenges may have been removed.

It just seems a little too convenient, to me, that Brelo's defense opted to have a judge hear the case rather than a jury. A judge certainly understands the law and its' "challenges". My guess is that the defense also understood those "challenges" and took advantage of them. If the prosecutor had charged every officer who fired a round the "causation" issue would have been a non-factor, in my opinion. We could concur that EVERYONE who fired a round caused the deaths of Russell and Williams.

Why then was Brelo the only officer charged when it is obvious to me that the 13 officers involved in the shooting acted, in my opinion, unreasonably. What happened to firing two rounds in rapid succession -- assessing the situation prior to continuing with a barrage of bullets?

Certainly the Cleveland PD must have an administrative policy that prohibits an officer from joining into a 65-vehicle car chase. Certainly Cleveland PD must have an administrative policy that requires an officer to justify each and every round fired. And where were the field sergeants who allowed 65 police cars to engage in a vehicle pursuit. Surely a supervisor somewhere on that department should have opined that maybe they pursuit involved about 63 cars too many. Maybe the consent decree can clear that up for the Chief.

McGinty went on to state that the case had already caused a "culture change" on the Cleveland police department "in terms of less secrecy and more accountability."

Well, if being suspended without pay for one to 30 days is accountability -- I guess. Thirty days without pay -- that's about fifteen suspension days per murder.

Cleveland Police Chief Calvin Williams, during that same press conference reported that as a result of the Brelo incident, 72 officers had been suspended; one supervisor fired, two supervisors demoted and three officers were cleared of misconduct. This "culture change" [after the Williams/Russell massacre] McGinty spoke of seemingly did little to dissuade Timothy Loehmann and his partner Frank Garmback from shooting and killing 12-year-old Tamir Rice.

Nearly six months after the murder of Tamir Rice, Officer Loehmann has yet to be interviewed regarding the incident. I guess the "culture change" has resulted in "less secrecy" -- not. Chief Williams, why hasn't Loehmann been interviewed, sir?

Would a "culture change" have precluded the Cleveland Police from hiring Officer Loehmann in the first place? Remember, Timothy Loehmann had been previously described, by a deputy chief on the Independence Police Department, as someone who "could not follow simple directions, could not communicate clear thoughts nor recollections, and his handgun performance was dismal" prior to Loehmann's resignation from Independence.

Apparently, Loehmann was exactly the type of officer Cleveland wanted on their department. Loehmann's hiring was only exascerbated by partnering him with Garmback who had used excessive force on a black female which caused the city to pay Tamela Eaton $100,000.

Hopefully the DOJ consent decree will finally create that "culture change." The consent decree will require that "officers must try to de-escalate situations before using a weapon..." Does that mean no more standing on the hood of a once fleeing vehicle and pumping 15 bullets through the windshield? Does that include maybe parking some distance away when responding to a "man with a gun" calland assessing the situation as you cautiously approach to determine if the man is really a "man" or a 12-year-old child?

I hope somewhere in that consent decree there is the mandate for all of those "scared" police officers to articulate each and every scary moment -- one by one -- that causes them to use force.

I hope somewhere in that consent decree is a requirement that any police officer who, through psychological reevaluation, is determined to have a predisposition of being in "fear of a black men" will receive counselling and removal from the field if proven incurable.

I hope somewhere in that consent decree if a police officer makes a conscious decision to use excessive force which results in death or serious bodily injury that the individual officer is held personally liable -- now that's accountability!

And as we applaud a measure of validation of the claims of disparate treatment and excessive/unnecessary force in Cleveland, let us not forget about Ezell Ford, John Crawford Jr., Eric Harris, Walter Scott and the countless black women who have been killed by police.