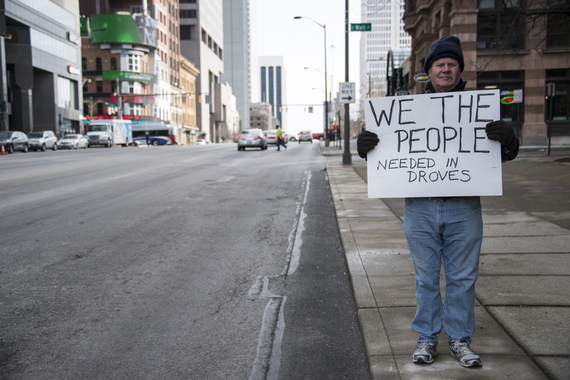 For a slideshow of further images with captions, please click here.

Article and Photos by Pamela Theodotou. Edited by K.J. Wetherholt.

This week, citizens concerned for the welfare of the environment have awaited the process by which President Elect Trump's Cabinet will be appointed. As the press has closely examined each nominee, conservationists, ecologists and climate-concerned citizens from both parties have expressed shock and disbelief regarding those tapped.

As Oklahoma Attorney General, Pruitt sued the EPA 14 times to block regulations that were enacted to protect the public from pollutants such as mercury, smog, acidic gases and other chemicals. As the head of the EPA, he could potentially dismantle necessary protections from the inside--a campaign promise Trump had been touting for months.

"We're going to have little tidbits left but we're going to get most of it out," he said at one point. "Environmental Protection, what they do is a disgrace," he said at another. Asked who would protect our air and water, he replied, "We'll be fine with the environment."

But that wasn't the biggest surprise for environmentalists. It would seem that "climate-denier" may be a requirement for all positions in Trump's cabinet.

"The Four Horsemen of the Environmental Apocalypse,"a term delineating the Secretaries of State, Energy, Interior, and Attorney General for the power wielded in government, have a long reach in climate affairs. It is no surprise that the London sculpture standing chest-deep in the Thames bears the same title and represents a visual metaphor and sobering reflection for our own political rising sea level.

With each name forwarded, news articles reviewing the potentiality of each candidate and his views has indicated the potential reversal of years of legislation meant to protect the public from bad air, poisoned water, among other actions that counter necessary protections.

Connections to big oil and fossil fuel interests arise daily through research by activists and members of the press, as the required ethics questionnaires for confirmation hearings have not been filed, the hearings proceeding regardless of what past administrations deemed necessary procedure. 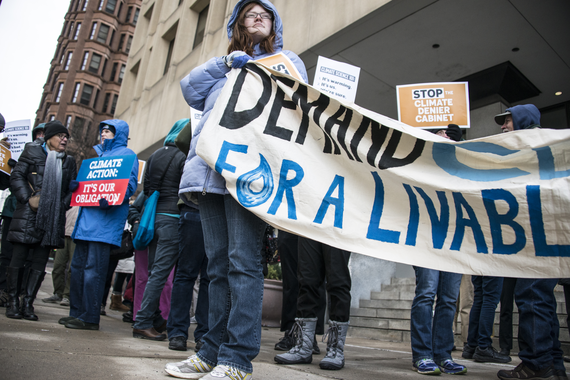 The news is daunting, and on a large scale. Individuals left to witness this absurd process shake their heads wondering how to be of some effect, given the enormity of the issues and the leverage necessary to speak truth to power. Many have found solace in social media, and even the most ill-informed individual has seen story after story regarding everything from Flint, Michigan's water issues to the DAPL protests at Standing Rock. Their only solace, if not protesting or taking direct action, has been their clicking of an emoticon which might trigger an algorithm on Facebook. Its result: perhaps delivering further relevant news and posts, without any indication if it will have any other measurable result.

But with certain action, there has been measurable solace: the new tidal wave of internet activism during which people click on "sign the petition" efforts or "click-sign letters" of concern to their representatives in government. National organizations are quick to support and encourage these groups by setting up national "days of activism" and unified marches on any number of issues.

One of those opportunities made itself available to Ohio activists through Central Ohio Climate Action Coalition, which organized a rally and protest simultaneously with other groups across the nation while U.S. Senate confirmation hearings began on Tuesday. Their purpose: to urge Ohio-elected officials in Washington to reject President Elect Trump's initial cabinet appointments, namely Scott Pruitt (EPA), Rex Tillerson (State Department), and Rick Perry (Energy Department), all of whom are expected to reverse current governmental policies making climate issues a priority.

The environmental battlefront is no stranger to Ohio. As a state that has a long history of embracing fossil fuel industries, Ohio has had a poor track record legislatively supporting alternative energy. In 2014, a 2 year freeze was placed on both renewable energy and energy efficiency standards; these industries would create necessary jobs, benefitting the state's economy.

Only a few weeks ago, Governor John Kasich, who believes the climate is changing but is reluctant to embrace humans as the cause, finally vetoed House Bill 554 that would continue that freeze, sending a message to legislators that progress waits for no one.

So while non-governmental state organizers have been active and taking their environmental concerns to a grassroots level in the last two years, looming federal appointments make it even more important to keep growing the movement and try and inform and support progressive ideologies on both sides of the aisle in Washington--especially when it comes to the capacity to counter a steadfast, climate-denying executive branch.

During one rally, guest speaker Elizabeth Brown, member of Columbus's City Council, spoke in support of raising a community voice: "It is such a progressive thing to do, to not just say stop the climate-denier cabinet, but to actually bring people together to talk about what can we do in a positive direction."

Her point about how we say "no" in these circumstances, but allowing for a collaboration to identify what we can say "yes" to, spoke well to the diverse groups in the room.

Despite the trend in Washington, she said, "We are ready to do a lot on a local level and with regional partners." 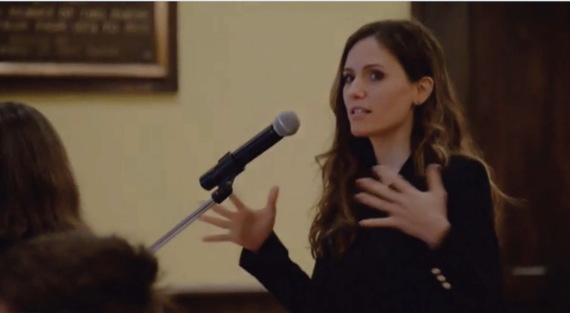 On a local level in central Ohio, while Brown spoke positively about the City of Columbus embracing these issues and exacting change, she more somberly addressed the concerns the rally was there to protest.

"Climate change is one of the most important human right issues we are facing today.... and it is a tragedy that we have people in Washington that do not believe in climate change."

Greg Pace, another speaker, representing Columbus Community Bill of Rights, pointed out, "Democracy will work when the number of interested citizens balances the moneyed influence. The crowd of interested and awake citizens is [slowly] increasing, but still not fast enough. "

He continued, "At Columbus Community Bill of Rights, we are part of the rights-based local ballot initiative movement that is happening across the country. In Ohio, more specifically, we are demanding that oil and gas production infrastructure be locally banned, as industry does not have safe or freedom-based priorities as they push through private property with gas wells, pipelines and infrastructure, and especially in central Ohio, where highly toxic, radioactive waste is being indiscriminately dumped in watersheds as is occurring across the state."

Michael Holm of Citizens Climate Lobby put it best when trying to zero in on the goal of the rally: to make climate change a human issue that both sides of the aisle can both address and embrace.

"We understand that 54% of Republicans - the party in power - believes that human-influenced climate change is real. But only 14 House Republicans have signed onto the Gibson Resolution that recognizes the threat and resolves to act against it. We can fix this disconnect."

Cathy Cowan Becker of the Sierra Club defined the reasons for the protest. A long list of public statements and prior acts hostile to environmental concerns of each of the four nominees were difficult to listen to considering their total lack of concern for the well-being for anything but large corporate interests--and the complete rejection of scientific facts--supporting a need for better laws concerning energy, pollution and conservation.

Pruitt, Tillerson, and Perry's public statements are all easy enough to find on-line and in print. However, the message of the rally involved our representatives' need to seriously question the fitness of these men to guide climate policy in the future for a better and more stable world.

Links among climate change issues, manmade or not, and destabilization of governments because of water issues, changing weather, and sea-level rise should all put us on the same side of the argument.

Just prior to leaving the rally and starting the march, one Columbus man in the audience, Jim Wiggin, a Columbus attorney, addressed the crowd with advice on how to make this issue important for both Republicans and Democrats. His message was a simple one: that having known Portman since their time in school together, there was one way to get through to him on the climate issue and that was to appeal to his conscience and his personal connection to climate issues. He described Portman as a man whose family has a tradition for the love of the outdoors, hunting and fishing, and that as a man willing to fight for causes he believes in, he has been willing to cross party lines in the past. In 2013 Portman braved the ridicule of fellow party members in support of other more personal issues, including breaking ranks with Republicans-- when citing his gay son--he supported legalizing same-sex marriage.

The group marched through downtown in the face of icy wind-chill temperatures to Senator Portman's Columbus office, signs raised high, and calling for Senator Portman to question the President Elect's choices. Arriving at the Senator's office, a five-member group was able to meet with one of the Senator's staff members to personally deliver their concerns while the protesters remained outside, raising signs and chanting environmental slogans, hopeful that their voices, unified with those throughout the country protesting simultaneously, would convince Washington legislators that climate issues may be one of the most important of all.

In a throwback moment of the protest era of the 1960's singer-songwriters Julie Kronenberger and Elizabeth Bolen raised their voices in song, having adapted the Woody Guthrie song "Rollon, Columbia, Roll On" into "Turn On, Solar Power, Turn On."