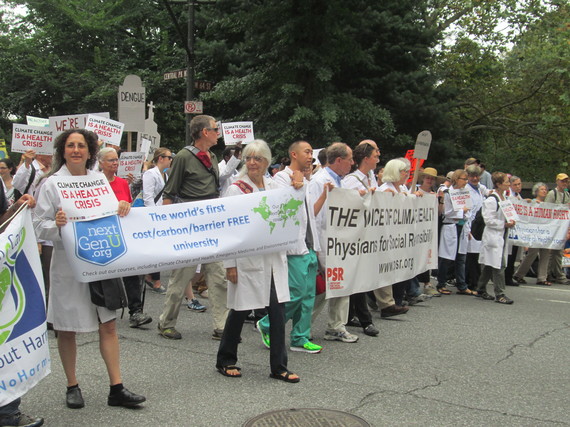 The 400,000 people who walked across New York City in this month's People's Climate March may not have known it, but their actions came on the heels of another event far away, involving indigenous activists in a remote part of the Amazon rainforest. Near the border of Peru and Brazil, they were making their own journey -- sometimes by walking -- to have their voices heard and to demand action on climate change, as were the marchers in New York.

For many, the People's Climate March was seen as a success and a good start, providing some momentum on the issue of how to deal with climate change and a more hopeful and optimistic focus on challenges. Yet for the members of Peru's Asháninka indigenous group who were traveling to negotiate territorial rights that would help them better protect the forest, the "lungs of the planet," the outcome in the rainforest was very different -- and tragic.

Indigenous leader Edwin Chota and three other leaders were returning to their home village of Saweto from a meeting about illegal logging held in the Brazilian village of Apiwtxa. They were slain while making their way through the forest that the community has called home for generations, and they were killed because they were trying to save that home. Their killers allegedly were loggers who would clear-cut the forest for timber, apparently at any cost. Since the killing, the widows and children of the murdered men have had to flee their homes in fear for their own lives.

A World Away, Yet the Central Issue Is the Same

Just weeks later, the march in New York opened the United Nations Climate Summit, during which world leaders gathered to discuss the most pressing issue of our time: how to save our Earth from the devastating consequences of climate change.

The march has been dubbed "the largest mobilization against climate change in the history of the planet," and was stunning in its number and diversity; signs called for global warming awareness ("Your momma's so hot, she's about to experience desertificiation"), no fracking, support of polar bears, and rejection of the Keystone Pipeline. People carrying mops and brooms held a sign reading, "Clean Up the Climate Mess," and several marchers held handmade windmills, calling for more renewable-energy investment.

In attendance were the very old -- people in wheelchairs and using canes making their way through Manhattan's streets -- and the very young, and every age in between. A group of kids from Plattsburgh High School's "green team" near the Canadian border dragged themselves out of bed in the wee hours to make the trip. Their enthusiasm for the march seemed to contradict findings from a January study by the Pew Research Center that ranked dealing with global warming second to last on a list of top policy priorities (number 19 out of 20).

Members of Physicians for Social Responsibility marched to bring attention to the connection between climate change and health. Executive Director Catherine Thomasson was impressed by the march's diversity. "It was inspiring and moving to have so many people in the streets. It galvanizes all of us to double our efforts and make the healthy choice for us and address climate change."

Marchers expressed a range of different approaches to climate change -- setting a price on carbon, ensuring climate justice, going vegan to minimize the greenhouse gas emissions associated with meat production -- but the central goal was the same: to demand that the global leaders gathered at the United Nations take concrete action to stop climate change.

Leading the Climate March were indigenous people, as part of the contingent of participants whose motto was "Frontlines of Crisis, Forefront of Change." Their presence was of note to Ben Grossman-Cohen of Oxfam America. "It was really important that some of the folks most affected by the dangers of climate change were a big part of this crowd," he said.

The Dangerous Fight for Our Forests

Edwin Chota, murdered in the forest only weeks ago, hoped that his voice could make a difference, too, and he showed it throughout his too-short life in his tireless work for his community -- organizing around securing territorial control of his home, the forest, to protect it.

And for that he lost his life. The senselessness of his death raises the question: Under what conditions is it safe to walk -- or march -- with a purpose and on behalf of protecting forests?

As we move forward, carrying the hopeful and determined mood of the march, it is important to remember Chota and the others who lost their lives engaging in the activism that was also brilliantly and powerfully on display at the People's Climate March. Beyond the march, beyond the summit, what can be done to support indigenous people who fight for our standing forests -- and who have been taking care of the world's forests for centuries -- forests that hold the vital key to mitigating climate change?

As Chota did, they face tremendous pressure from outside influences who would use their land for agriculture, mining, and timber. Indigenous people the world over need support for the work they do to preserve and maintain standing forests, such as financial mechanisms that pay them for their forest management and an international community united in carrying their message.

Although they may not have known it as they marched the streets of New York, the participants in the People's Climate March are connected to Edwin Chota and the three other slain members of the Asháninka in their shared activism. And as the world watches our global leaders now take action -- or not -- on the vital issue of climate change, indigenous leaders will continue to fight for our forests.

This report was filed by Gloria Gonzalez and Ann Clark Espuelas.