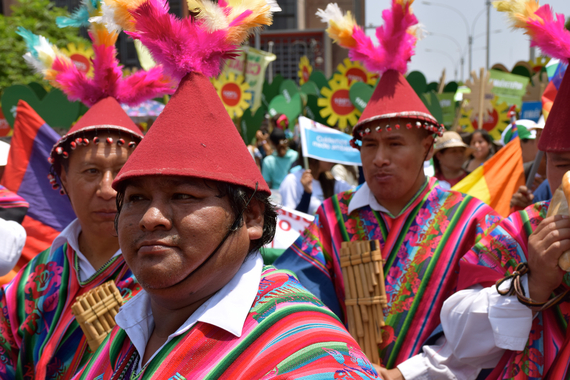 The UN Climate Talks in Paris next December are shaping up be high noon for the fossil fuel industry.

Over the last week, negotiators here in Lima have been working on the draft of a new climate agreement that world leaders hope to ratify in Paris. Up for debate is everything from forest management to climate finance. The text is complicated, sprawling, and a jungle of acronyms and jargon.

But one theme is emerging loud and clear: if the world is serious about addressing the climate crisis, we must get off fossil fuels--completely. This is a new frame for the climate negotiations and it's revolutionary in its implications.

The last time the world attempted to finalize a climate treaty was in 2009 in Copenhagen. Back then, the debate revolved around managing greenhouse gas emissions and the percentage reductions that rich countries were willing to commit to. Or, as it turned out, unwilling to commit to. The talks were a debacle.

While countries still play a central role in the negotiations, a new actor has taken the stage: the fossil fuel industry. I've been coming to the climate talks since 2005 and I've never heard more discussion about the need to leave fossil fuels in the ground and radically transform the industry as we know it.

I'm not the only one. Earlier today, the Associated Press ran a piece about how a "zero emissions" goal has been quickly gaining traction, with over 100 countries adopting the target. Yesterday, Leonardo DiCaprio tweeted out the news that the new climate text would "end fossil fuels" by 2050.

This new frame of "ending fossil fuels" is important for a number of reasons:

1) It strengthens the carbon bubble argument: The "carbon bubble" refers to the idea that fossil fuel companies are dramatically overvalued because their financial worth is based on their ability to turn their coal, oil and gas reserves into profit, and 80% of those reserves will need to stay underground if the world aims to keep global warming below 2°C. The fossil fuel industry has argued that the carbon bubble isn't real because governments aren't serious about their commitment to 2°C. Seeing goals like "zero emissions" in the Lima text are clearly making the industry - and their investors--nervous. Just today, a well known Australian columnist wrote in the Business Spectator that many fossil fuel assets could end up stranded. As investors turn away from the fossil fuel industry, it not only opens up the space for political leaders to act, but starts to directly move the economy in the direction we need.

2) It builds the case for fossil fuel divestment: As the reality of the carbon bubble becomes more mainstream, it strengthens the financial case for fossil fuel divestment. Big investors like the Bank of England, for example, are suddenly analyzing their investments for their exposure to this carbon risk. By framing the global climate effort as a battle with the fossil fuel industry, the climate talks also help strengthen the political and moral case for divestment. Earlier this week, a group of Catholic bishops from around the world said that the world must get off fossil fuels by 2050 in order to protect the world's poor from climate change. It doesn't get more moral than that.

3) It highlights the importance of iconic fossil fuel fights: Fancy words are only as good as the real commitments that back them up, of course. As Bill McKibben wrote in the Guardian this morning, the real test of whether countries like the US and Australia are serious about their commitments is if they're willing to shelve big fossil fuel projects like Keystone XL and the Galilee Basin coal mine. When he visits the climate talks in Lima, Secretary Kerry will be coming under pressure to reject Keystone XL. If the goal is phasing out emissions, it makes no sense to invest in major new fossil projects.

4) It could turn the Paris climate talks into a movement moment: Many people and organizations in the climate movement are skeptical about the importance of the UN climate process. After all, the talks have been going on for decades and have little to show in terms of concrete progress. Lots of groups are still hung over from the blowout in Copenhagen, where much of the movement threw itself into the fight for a "fair, ambitious and binding" treaty only to walk away burned. While the chances of Paris being a transformative policy moment remain low, they could become a transformative political moment if the talks continue be framed as a battle against the fossil fuel industry. If people get the sense that the fate of the fossil fuel industry is being determined in the streets of Paris, they could turn out in force.

In the aftermath of the failed climate bill in the United States and the collapse of Copenhagen, our team at 350.org turned our sites on the fossil fuel industry as the real barrier to political progress on climate (we were late to the party--many grassroots groups have been directly challenging the industry for years). Since then, the fight against the Keystone XL pipeline and the growing fossil fuel divestment movement has helped reenergize the North American climate movement. Back in 2009, during our first international day of action, a few thousand people turned out in New York City to call for a bold climate treaty in Copenhagen. This September, just five years later, 400,000 people took the streets.

As Bill predicted in a Rolling Stone article in 2012, turning the fossil fuel industry into an enemy was crucial to strengthening the movement:

So: the paths we have tried to tackle global warming have so far produced only gradual, halting shifts. A rapid, transformative change would require building a movement, and movements require enemies. As John F. Kennedy put it, "The civil rights movement should thank God for Bull Connor. He's helped it as much as Abraham Lincoln." And enemies are what climate change has lacked.

But what all these climate numbers make painfully, usefully clear is that the planet does indeed have an enemy - one far more committed to action than governments or individuals. Given this hard math, we need to view the fossil-fuel industry in a new light. It has become a rogue industry, reckless like no other force on Earth. It is Public Enemy Number One to the survival of our planetary civilization.

Identifying the real barrier to progress has helped the climate movement build unprecedented momentum in the last few years. Let's hope the same analysis can help negotiators at the climate talks finally get the job done.