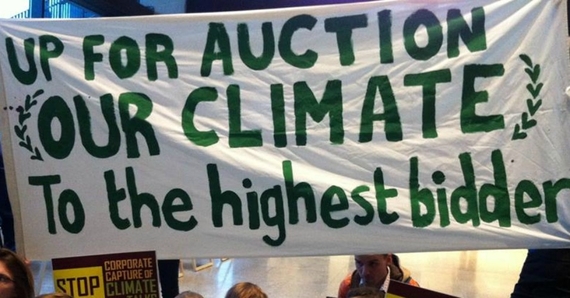 As President Obama flies to Paris this weekend for the opening of the latest international negotiation on climate change, diplomats on both sides of the Atlantic appear confused about what his position will be. Will he champion legally binding commitments by all nations including the U.S. to reduce their greenhouse gas emissions? Or will he agree only to deal with no legal force?

The distinction is like the difference between a handshake and a contract. The first is a matter of honor; the second is a matter of law. No one believes a Paris agreement will be sufficient to keep global warming to acceptable levels, but only a legally binding commitment is likely to keep international momentum alive for more progress after Paris. For the sake of his legacy, President Obama should settle for nothing less. Here is how and why:

How: On the eve of President Obama's departure, the deal that appeared to be taking shape would include some legally binding elements, but they would not apply to the most important objective: greenhouse gas reductions. The President is trying to stay away from an agreement that is called or that looks like a formal treaty. Everyone knows that a treaty would have to go to the Senate for approval, where it would die on arrival.

But there other types of agreements that have legal standing without Congress's approval. They are called "executive agreements". They are the most common form of commitments between the United States and other nations. There have been 17,300 of them since 1939 compared to only 1,100 ratified treaties. It appears that specific U.S. commitments on greenhouse gas reductions could be included in an executive agreement.

If the Obama Administration made the United States a party to such an agreement without Congress's concurrence, congressional leaders would mostly likely draw their swords and fight all the way to the U.S. Supreme Court. They would argue that the President had overstepped his authority and abused the separation of powers. Under the circumstances, it is a fight worth fighting.

President Obama can point out that global warming is acknowledged in 96 different U.S. statutes. Several of them include findings by past congresses that climate change is real and dangerous and requires an international solution. In several of them, Congress delegated powers to the Executive Branch to confront climate change. One example is the Clean Air Act, which establishes our obligation to prevent any air pollution that "may reasonably be anticipated to endanger public health or welfare in a foreign country." In addition, making the United States party to a binding agreement would be consistent with the United Nations Framework Convention on Climate Change (UNFCCC), which the Senate approved and President George H.W. Bush ratified in 1992.

If the current members of Congress do not agree with the findings, statutes and delegations of authority approved by previous congresses, they can repeal them. In the meantime, the President's constitutional duty is to faithfully execute the laws of the land.

Insofar as precedent matters, President Obama could cite the "stewardship theory" of executive power. That was the interpretation of presidential authority that Republican President Theodore Roosevelt adopted based on the leadership of Republican President Abraham Lincoln. It holds that when there is a compelling national need and Congress fails to address it, the President of the United States has an obligation to act unless he or she is specifically prohibited by the Constitution or by law.

The stewardship approach is justified today because Congress is acting contrary to the will of the American people on one of the most consequential and time-sensitive challenges in history. In a survey last October, the Yale Center for Climate Change Communication found that more than 70% of the American people say it is important to reach an agreement in Paris, including nearly two of every three Republicans. In addition, 64% of the survey's respondents said the United States should be doing more or much more to address global warming.

Why: In reality, an agreement with legal force does not have much legal force because there are no hard sanctions for failing to carry out its obligations. There is no international climate court that can penalize a noncompliant nation. In this case, however, the symbolism of a strong agreement is important. It would give each nation greater confidence that the others will keep their promises.

Ironically, it is Congress itself that has made a binding U.S. commitment necessary. Because of Senate opposition during the Clinton Administration, the U.S. became an international outlier by refusing to sign the Kyoto Protocol. Republican leaders in the current Congress want to make sure that remains the case. They undertook a campaign earlier this year to persuade other countries that a climate commitment by President Obama cannot be trusted since the next president and Congress can undo it. An agreement with legal force is more likely to reassure other nations that the world's second largest source of greenhouse pollution will stand by its commitments.

This is necessary in part because unlike the No. 1 and No. 3 largest emitters, China and the European Union respectively, the United States does not have a domestic requirement for economy-wide greenhouse gas reductions. The EU's commitment to cut its emissions 40% by 2030 is codified in a binding target approved by its leaders. China's commitment has its roots in its 12th five-year plan instituted by its command-and-control government. In our current political environment, a binding Paris deal is as close as we will come to a national commitment that is more concrete than aspirational goals.

This makes a difference to the entire global effort against climate change because like it or not, the rest of the world looks to the U.S. for leadership. As the Council on Foreign Relations notes, "The perceived lack of leadership by central players in the climate change debate - especially the United States - has elicited increasing concern about the long term prospects of the global climate change regime."

A binding international agreement also is critical for triggering the level of private investment necessary to meet the world's energy needs with clean resources like solar and wind power. The International Energy Agency, among others, estimates we will need a global investment of $1 trillion every year.

That level of investment is not likely without a reliable commitment by the world's governments to mitigate climate change. Six of America's largest financial institutions recently issued a joint statement that underscored the importance of a strong Paris agreement. "Expanded deployment of capital," they wrote, "is critical, and clear, stable and long-term policy frameworks are needed to accelerate and further scale investments."

The Key: To avoid a losing battle in Congress, the U.S. commitment in Paris must be designed carefully so that it does not require new legislation. An analysis by Climate Action Tracker shows that the United States can achieve President Obama's goal (a 26% to 28% reduction in greenhouse gas pollution by 2025) by fully implementing his climate action plan. Nearly all of its elements are being done with the Executive Branch's existing authorities.

The trickiest challenge in a legally binding agreement would be how to deal with financial commitments. Several are in play, including contributions to the UN's Green Climate Fund and compensation to developing nations that are already suffering significant climate-related damages. Any financial commitments that require new money should be shown as contingent upon appropriations.

The Legacy: To his credit, President Obama and his team already have done more to confront climate change than any previous administration. His finest moment and crowning achievement should be his strong leadership on a climate deal with legal force.

If he allows the flat earthers in Congress to tie his hands - if he chooses to avoid a battle at home by offering the world nothing more than a handshake -- his most important legacy will end not with a bang but a whimper.