It's remarkable. Donald Trump chose Detroit to make his economic speech, where he accused the Clintons of causing Detroit's employment problems with their trade policies.

Is he kidding? The Detroit Big Three automakers didn't lose jobs because of trade pacts, but because of the Great Recession. They built the wrong size gas guzzling hogs at a time that consumers wanted smaller cars, so it was a government bailout that saved them. Trade pacts have hurt some workers, but benefited many more by bringing in new export-oriented, high tech jobs.

Donald Trump is shooting at the wrong targets. He wants to bring back the old economy via a trade war with China, abolishing the minimum wage, suspending government regulations, and lowering tax rates; even the inheritance tax that only affects those with $5 million plus to pass on. But he says nothing about income inequality or the budget deficit, which can only be cured by concentrating on developing a new economy that brings in new jobs based on new technologies and a new environmental awareness.

It won't do any good to accuse President Obama of "failed economic policies" because many blue collar workers lost their jobs in the Midwest rust-belt states. Some 10,800,000 million jobs have been created during the Obama recovery years. President Obama is now in third place (purple line in graph) behind President Reagan in second (per yellow line) with 14,735,000 jobs created, and President Clinton (blue line) in first place with 21,000,000 jobs created during his 8 years. 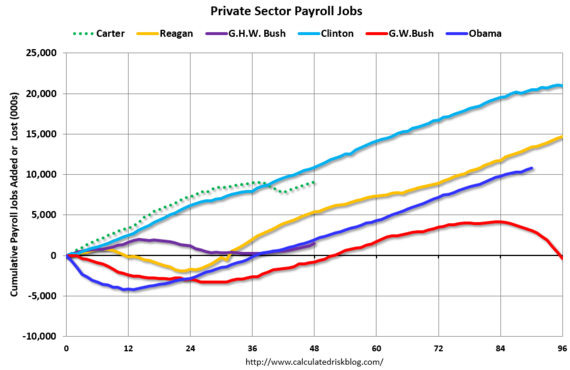 Trump also proposed reducing the maximum corporate tax rate to 15 percent that he said would boost jobs and investments. Problem is, corporations have already hoarded some $4.5 trillion in cash and cash equivalent securities from their record profits they aren't spending on anything but higher CEO salaries, and stock buybacks that enrich corporate execs and their stockholders even more.

What about the slow economic recovery? It's mostly due to poor economic conditions worldwide, such as caution due to Britain's Brexit withdrawal, China's slowdown, and plunging commodity prices that have hurt developing countries. But it's also due to misplaced austerity policies that have restricted new investment in favor of cutting public spending in Europe and the U.S. because of the fear of ballooning budget deficits, when just the opposite is needed--investments that will increase jobs, and so tax revenues to pay down those deficits.

We really have only one model of successful deficit reduction since WWII--Bill Clinton's. That is why Hillary has mentioned Bill's record of record growth that created the most jobs of any presidency since WWII, and 4 years of actual budget surpluses. It was due primarily to defense spending cuts as the Soviet Union collapsed and a higher maximum tax rate (40 percent). The economy grew for 10 years--from 1991 to 2001, before the do-com bust and short recession that ended on November 2001, just 2 months after 9/11.

So Hillary proposes to equalize income inequality with a higher minimum tax rate of at least $12 per hour, even $15 per hour in higher priced regions, while raising taxes and closing tax loopholes of the wealthiest to pay for tuition-free public colleges, universal health care and paid maternity leave--something that the developed countries and most developing countries already have.

Hillary's economic platform should enable US to catch up with what the rest of the world provides for their citizens, in other words.