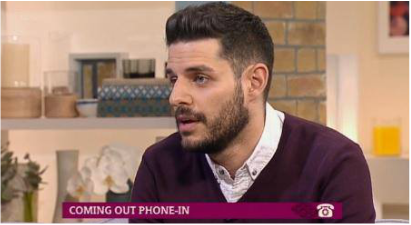 I was always a nervous kid I guess. I remember avoiding arguments and confrontations. I used to get nervous about certain lessons at school because the teachers were strict and used to shout a lot, but it was at 18 that I first experienced anxiety.

I'd just started university and was in a seminar in the first proper week of study (Fresher's week obviously doesn't count!) and there were about 20 other people there too. I didn't know any of them; they were strangers to me - although some would become good friends later. The lecturer asked us to introduce ourselves and tell the class something interesting about our lives. Instantly my heart started pounding. I started sweating more than I'd ever sweated before and I was suddenly unable to swallow properly. And I became really hot. Not in a sexy way, but in a 'can someone please open all of the windows in the entire building' way. It wasn't nerves, it was more than that.

Going to uni was the start of me accepting I was gay. I'm pretty sure that what triggered that first attack was the fear of being exposed to a new group of people. I felt that by putting myself on the spot, I'd open myself up to people making assumptions about me. I was scared I'd be found out. Lesbian, gay, bi and trans people are statistically more likely to experience mental health problems than straight and cis people and it doesn't take a psychologist to work out why.

The feelings I was experiencing in the seminar were too much for me and I got up and walked out of the seminar without an explanation to the lecturer. I stayed in the toilet for the rest of the seminar. I returned to the class a few weeks later and settled in pretty well. I assume my lecturer thought I was just ill. I never spoke to her about what really happened. This is one of my biggest regrets.

As time went on I began to manage my anxiety in various ways. I'd sit next to the door if I could in lectures and seminars so I didn't feel trapped, I'd always have a bottle of water with me in case my mouth became dry and I'd wear light clothes so I didn't get too warm -- which was a big trigger for me.

Years went by and I did a great job at keeping a lid on my anxiety. I still didn't talk to anyone about it. I didn't see the point.

But then something changed.

Last summer my anxiety monster came back -- with a vengeance. I had a wave come over me on the tube so I had to get off. I was sat in the cinema with a friend and the wave hit me again. I had to stop presenting in a work meeting and once I didn't even go in to a team meeting because I felt so bad. I'd wake up in the morning and not want to get out of bed. I didn't want to be around people. For someone who loves being around people but feels that they can't, it's a confusing and frustrating experience.

I work at Stonewall, an equalities charity. We work towards a world where everyone can be comfortable being who they are, whether that's at home, at school or at work. The irony is that while I was finally working in an organisation where I could be out about being gay, I wasn't out about my anxiety. So I came out - again! I started to talk to colleagues, my line manager and HR manager. I even spoke to the chief executive about what triggers my anxiety and she was amazing. She reassured me and told me that I was in control and to let her know what I needed to make things easier.

The truth is I didn't actually need anything other than for those people who I work with every day to know that I have 'this thing' and that sometimes it may affect the things I do and how I behave. Mental health is an open topic of discussion at work. We know that most people have had issues with their emotional and mental health and that's why we find it easy to talk about it. Talking really helps.

Public speaking is another massive trigger for me, which is awkward because it figures in a lot of my job role. Every time I stand on a stage or at the front of a room about to deliver training I have that feeling. I ride it out and try and take control. It doesn't always work but mostly it does. I'm learning to push myself more and more and fight the voice inside telling me to say no, go home, give up. It's working. I've chaired a panel discussion about coming out in front of 500 people and been on a national TV show talking offering advice to callers. Before each of these I was petrified and considered walking out but I told myself those thoughts were only temporary and that I could think them away, and I did. It sounds weird but it's like an internal argument with yourself.

When I'm in team meetings at work now, everyone knows that asking me to go first with any updates really helps my anxiety so they let me. It's about being open and asking for that support. People are generally really happy to help.

Anxiety can become debilitating, there's no question about that. I know I'll have massive dips as well as periods when it disappears completely, however, it'll always be there, somewhere. What I'm doing now though is owning my anxiety not fearing it. It's part of me and it always will be so I'm trying my best to understand and control it. And talking really helps.