I recently received a link on one of my emails and it had a link to what appeared to be a joke running on the island about an article that appeared stating that Puerto Ricans were the closest to the "perfect human being."

As a Puerto Rican I was flattered to read that title, but I also wanted to get to the source of where the comment originated. The following is what I found. It seems it was more than a joke.

I dont know if we Puerto Ricans are the closest humans to being perfect, cause God knows we have many issues, but everytime I looked at my children and now my grandchildren I can't help to believe that they are perfect. But then again, what parent and grandparent does not think the same?

Why and how is this possible? Well according to one scientist, Puerto Ricans are the closest to the perfect human being.

Below is an excerpt from the full article that appeared in El Planeta, Boston's Latino Daily.

"The closest to the perfect human being, at a genetic level, would have to be Puerto Rican, thanks to its mix of Spanish, African and Taíno heritage, according to the study by a biologist at the American University of Berkeley.

"Not that the current Puerto Rican is a man or a perfect woman, because no human group is," he told EFE, scientist Lior Pachter, whose claim has been received with great sense of humor among the inhabitants of this Caribbean island .

From his office in California, Pachter says that he launched the investigation after meeting and listening at a conference by chance to the words of James Watson in March 2004.

Watson, who won a Nobel Prize for Medicine in 1962 for his work on the structure of the DNA molecule, spent the night making racist and homophobic comments that displeased Pachter.

Instead, his research has concluded that a mestizo with such widespread miscegenation as the Puerto Rican people have the greatest chance of hosting as close to "perfect human".

Pachter goes further and says that the particular individual who would match the perfect human is one with the genetic makeup of HG00737 code and ensures that it already existed.

As a result of its analysis that the perfect human being was, specifically, a Puerto Rican woman, Pachter says he pictured her as the Taíno native, Yuiza (Loiza), who became chief of her tribe, somewhat very unusual for a woman. 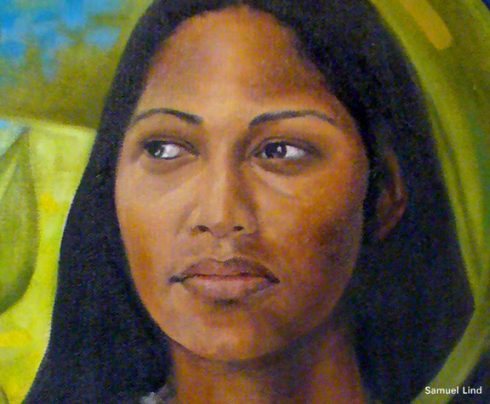 Is The Perfect Human Being A Puerto Rican?
Yuisa, Taína Cacique painting by Samuel Lind.

In fact, his blog reproduces the portrait of the woman that came to mind and was drawn by local artist Samuel Lind.

This is the scientific response to comments, Pachter (Nobel prize in Medicine), has joined his career to improving the imperfect obsession on genetics, he recalled the researcher, whose claim has sparked all kinds of jokes among Puerto Ricans."