A funny thing happened Sunday on the way to the fourth quarter: Netflix announced ― via a televised teaser, press release and social media campaign ― that the newest “Cloverfield” flick would premiere on the streaming platform immediately following the Super Bowl.

Call it the Beyoncé-ification of movies. Call it “This Is Us” counter-programming. Call it a thrilling chapter in the brave new world of streaming, where the Netflixes and Amazons acquire exclusives and exhibit them beyond the confines of theatrical distribution models.

But we also have to call it a turd, because that’s what “The Cloverfield Paradox” is.

Netflix made the exciting decision to deposit this third installment of the “Cloverfield” series with mere hours warning, a phenomenon that could only suit a reputable franchise or a project with massive star power. It was especially wise here. The aura of surprise has long followed these movies: Trailers for 2008′s “Cloverfield,” the found-footage sleeper hit, stoked intrigue by omitting the title; 2016′s “10 Cloverfield Lane” was disguised by another name until Paramount debuted its trailer a short two months before the release. Netflix’s sneak attack gave “The Cloverfield Paradox” the potential to rattle Hollywood, where studios devote millions to more methodical, elongated marketing campaigns.

But it would need to be good to rattle the system, or to at least provide much-needed evidence that Netflix is a reliable purveyor of quality cinema. Sadly, it’s not.

Despite a sterling cast that includes Gugu Mbatha-Raw, David Oyelowo, Daniel Brühl, Chris O’Dowd, Elizabeth Debicki and Ziyi Zhang, “Paradox” is a derivative brew of science-fiction tropes familiar to anyone who’s seen “Alien” or its many descendants, particularly last year’s underrated Jake Gyllenhaal thriller “Life.” That alone would be relatively innocuous if this movie ― directed by Julius Onah (“The Girl Is in Trouble”) and written by Oren Uziel (“22 Jump Street”) ― were more comprehensible, both as a stand-alone story and as a piece of the broader “Cloverfield” pie.

Instead, connecting “Paradox” to the franchise is tenuous at best. It’s a prequel to “Cloverfield” that sort of posits how that monster came to knock off Lady Liberty’s head a decade ago, except it does so with mumbo jumbo about particle accelerators, circuit systems, alternate dimensions and the Higgs boson. The aforementioned actors portray a crew aboard the Cloverfield Station, attempting a space mission that would restore power to the hellscape that has become Earth, where “oil wars” are spreading, rubble has flooded the darkened streets and one person declares that “normal life is hanging by a thread.”

Meanwhile, on cable news, an author warns that the mission could “unleash chaos, the likes of which we’ve never seen — monsters, demons, beasts from the sea,” oh my.

Two-thirds of “Paradox” is exposition, the troop half-explaining to one another the life-or-death science behind their reality while traversing the narrow hallways and blinking lights that every big-screen spaceship knows all too well. I don’t at all care whether sci-fi accurately portrays, well, anything. But a logical plot is essential, as is sustained tension. “The Cloverfield Paradox” has neither, coasting on its stacked cast and a couple of fun sight gags to fill in what’s missing from the under-sketched characters.

This makes Netflix’s launch all the more fascinating and all the more frustrating. Like “Cloverfield” and “10 Cloverfield Lane,” Paramount was behind this film ― originally titled “God Particle” and slated for an April 20 release following three postponements ― until just a couple of weeks ago, when The Hollywood Reporter revealed that Netflix was in talks to take over distribution. The previous two installments cost $25 million and $15 million, respectively, and apparently Paramount’s new chairman didn’t think the $40 million-plus “Paradox” budget was profitable. Furthermore, producer J.J. Abrams was too busy to step in to help improve the movie’s quality, which “needed some work,” according to The Hollywood Reporter’s sources.

Fast-forward two weeks, and the thing is already on Netflix. As I argued in December, Netflix robustly marketed few of its 56 ― 56!!! ― original films in 2017. Despite prestigious directors and A-list talent, most of the platform’s exclusive titles got buried amid a glut of content ― which is what makes Sunday’s ambush thrilling: It drums up instant chatter and reignites the conversation behind one of our stealthiest franchises; little marketing required. It fosters a mini-monoculture around a movie while multiplexes further lose their luster in America.

But with “The Cloverfield Paradox,” it appears Netflix was merely annexing sloppy seconds. It’s another marker for a company that increasingly values quantity over quality. I wonder why we ever expected more from a subscription-based business that only cares whether you remain a paying customer. No one or two or three misfiles will devastate Netflix’s brand, so why should execs devote too much attention to the caliber of its output? But it’s one thing to provide a platform for so-so movies that traditional studios wouldn’t green-light; it’s something else entirely to pull a stunt release for a Paramount castoff that barely deserves to call itself a “Cloverfield” volume.

The precedent has been set. Netflix is showing us it will game the promotional system for any old thing that might attract eyeballs. I guess what I’m saying is: This is a disheartening victory. I’m sitting here writing about the damned thing, aren’t I? You’re reading it, aren’t you?

On Sunday, one of the trendiest entertainment corporations in the world made us think it was onto something vitalizing; instead, it was its own paradox,  encapsulating both the brilliance and futility of Netflix.

It’s another exercise in 21st-century mediocrity.

'The Cloverfield Paradox' Is A Waste, And Netflix Spoiled Its Chance To Be Beyoncé
Best of the 2018 Sundance Film Festival 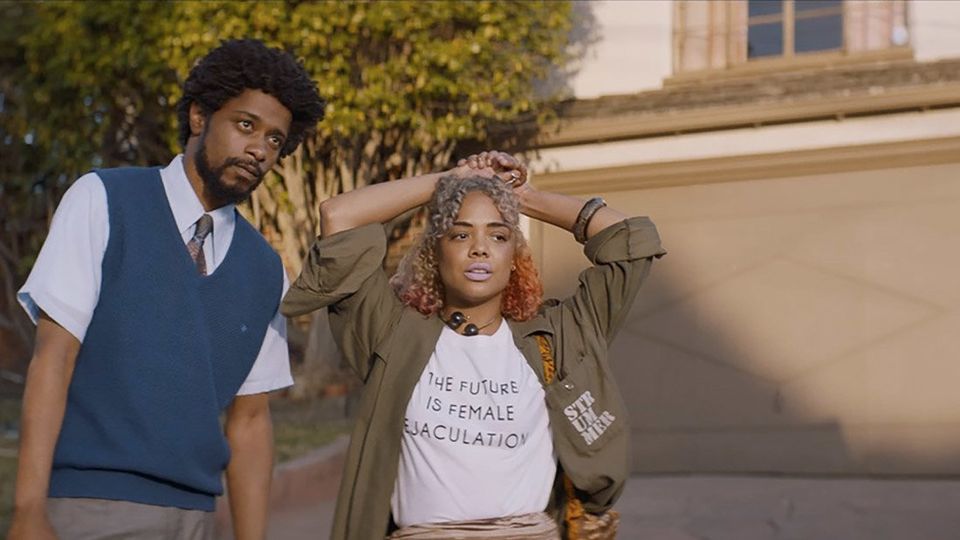 1 / 6
"Sorry to Bother You"
We could build an entire cultural&nbsp;discussion around&nbsp;Danny Glover's career advice for Lakeith Stanfield in "Sorry to Bother You": As a telemarketer, you're better advantaged if you disguise your voice to sound white -- but not "Will Smith white." (Fun side note: Sundance juror Jada Pinkett Smith was in the audience at the premiere. Quick, someone ask what she texted her husband afterward.) But that counsel only skims the surface of this rowdy, surreal comedy about an Oakland&nbsp;20-something&nbsp;hawking a wellness program that, come to find out, doubles as an elaborate slave-labor ploy. <br><br>With a character name like Cassius Green, an artist-activist girlfriend played by Tessa Thompson (just wait till you see her statement earrings) and a coke-guzzling boss (Armie Hammer!) who demands Cassius freestyle at a party, Stanfield and writer-director Boots Riley have conceived a character torn between wokeness, economic gain and a very human&nbsp;urge to keep the peace. But as events grow increasingly bizarre --&nbsp;have you ever seen a horse-man penis?&nbsp;-- the movie also finds a soulfulness, resonating ever more strongly as it threatens to fly off the rails. Merrill Garbus of<strong>&nbsp;</strong>Tune-Yards fame wrote the score, so imagine an effervescent joyride in which corporate greed, racist stereotypes and palatial orgies make cameos. -- <i>Matthew Jacobs</i>
Courtesy of Sundance Institute