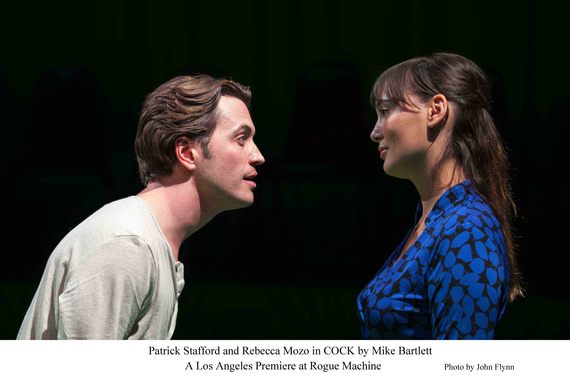 British playwright Mike Bartlett's play (whose actual title is less family-friendly) about the ambivalence of love and sexuality, which won the Olivier Award in its 2010 production in London, has both the rewards and the shortcomings of a traditional "problem play." In this case, the "problem" is the existential confusion of protagonist John (Patrick Stafford) about whether to stay with his lover M (Matthew Elkins) or fly away with W (Rebecca Mozo), his first ever female bedmate.

In a series of short scenes, Bartlett lays out John's conundrum -- stay in safe, familiar romantic and sexual territory, or strike out into the unknown arms of a new partner -- and a woman at that. One suspects that John wants to have his cake and eat it too, which would actually be fine if it weren't for his demanding partners and his own endless indecision and self-searching. In fact, it's hard to understand what John's problem really is. On the surface, it appears to be a question of sexual identity, but on closer inspection it feels more like the vacillations of youth.

Which is the problem at the heart of the play. John's dilemma seems to be largely self-created and easily solved. He could stay with his gay lover, or go with the girl, or sleep with both of them. Bartlett insists that this is an issue of love, not sex, and his characters seem to agree, which throws the play into some confusion, since it seems unlikely that the non-committal John is not really capable of much more than self-love, with an unhealthy dose of self-loathing tossed in. To spice up the drama, Bartlett throws in a dinner table confrontation, with none other than M's father (Gregory Itzin), who offers a spirited defense of gay love, marriage and civil rights while ogling W's breasts.

In the midst of this somewhat flawed play are some fine performances. Itzin, always excellent, is delightful as the devoted Dad, while Mozo, a shining light on Los Angeles stages, is beguiling and pointed as W. Stafford and Elkins struggle with their roles, perhaps because they are more amorphously written and ill-defined. Director Cameron Watson seems to miss the mark, especially in the blocking on the in-the-round stage, which seems to choreograph the actors as if by stopwatch. The set by Stephen Gifford is enticing, but is oddly disconnected from the tone of the play.