For the moment, we're still steering and braking, but we've gone far down the road to self-driving cars. A vast majority of the technology to enable at least some form of autonomous driving is either two years away from introduction, or already here. It's a matter of time, and the cognitive price we're going to pay for it is catastrophic. 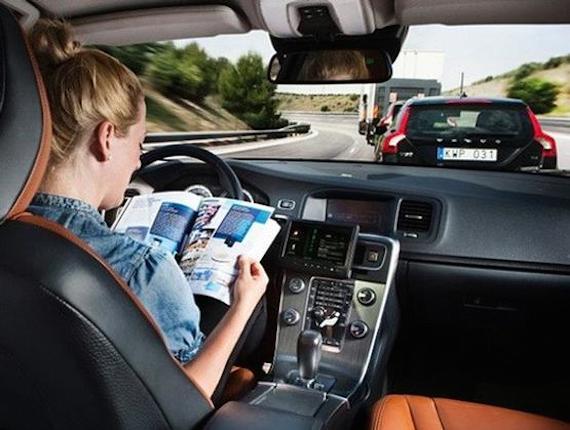 Just a few days ago, General Motors CEO Mary Barra announced that two Cadillacs in 2017 -- the Cadillac CTS and a flagship-sedan-to-be-named-later -- will incorporate two technologies that advance the cause of self-driving cars more than any two pieces of technology thus far. The 2017 CTS will feature embedded V2V (vehicle-to-vehicle) technology that will allow the CTS to communicate with other cars on the road. For example, the CTS will be able to acknowledge and warn the driver that a car is pulling out of a side street, even if the driver hasn't seen the car yet.

The as-yet-unnamed Cadillac flagship sedan will feature something called "Super Cruise," which is an even further step toward letting technology completely take over the driving experience. In certain traffic circumstances, drivers can relinquish control of the brakes and the steering, allowing the car to stay within a lane, brake and accelerate with traffic, freeing the pilots to talk on the phone, play Angry Birds or doze off.

Google has been working on autonomous cars for a number of years. Unlike the traditional automotive industry, Google is working on an approach that completely eliminates the driver from the equation, to the point that its prototype doesn't even feature a steering wheel. 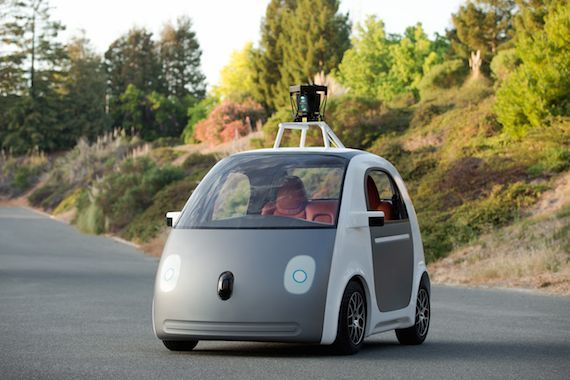 But in a piece last month from the MIT Technology Review, the project manager in charge of the Google car is pragmatic about the long road to production, noting that "safety concerns have precluded testing even during heavy rains, let alone snow and ice. According to the article, big, open parking lots and multilevel garages are still on the list for testing, too. "I could construct a construction zone that could befuddle the car," Urmson says.

The traditional automotive industry, on the other hand, is taking an approach that's much more driver-centric than Google. The car won't drive itself, and a driver always has to be present who can wrest control from the electronic chauffeur. But in certain conditions -- long stretches of desolate highway or in heavy gridlock, for example -- the driver can authorize the car to take some control of most of the driving functions.

Technology already exists to automatically brake if the car feels that the driver isn't paying attention. Lane departure warning currently exists in a lot of cars, but lane departure prevention arrived for the 2015 model year. The technology in the 2015 Infiniti Q80 alerts drivers that they're drifting out of lanes, and then selectively applies the brakes to specific wheels to nudge the car back into line.

Owning a car and participating in its operation is the last vestige of work that we're actually required to perform on our own. Landscapers cut our grass, sociologists suggest that preparing family meals isn't worth the effort and my own local community bulletin board on Facebook is littered with posts from people who lack the highly technical knowledge and specialized tools to install a mailbox.

Early drivers are trained with the acronym SIPDE process of traffic assesment:

S - Scan (Actively scan the roadway 10 to 12 seconds ahead)
I - Identify (Sift out the critical data, locating potential hazards)
P - Predict (Ask yourself "What if...?" about every potential hazard)
D - Decide (Choose what you're going to do to avoid a crash, mitigate its effects)
E - Execute (Convert your plans into actions)

It's an enormous mental activity, every single second of every trip, and it's become such second nature for millions of us that we barely even notice it's happening. In just a few generations, we've honed our brains to react at speeds that our great-grandparents only dreamed of.

Why would we give that up?

In the last decade, we've done more to isolate ourselves from the driving experience than ever before. Simultaneously, a team from am from Rush University Medical Center and the Illinois Institute of Technology recruited 152 older adults and measured the structural integrity of each participant's brain. The research suggested that those who engaged in stimulating activities showed healthier densities of "white matter" -- the parts of the brain that transmit information -- than those who didn't.

Dr. Robert Wilson, who led the study, said the research suggested exercising the brain across a lifetime was important for brain health in old age. He told BBC News: "The brain that we have in old age depends in part on what we habitually ask it to do in life," adding "What you do during your lifetime has a great impact on the likelihood these age-related diseases are going to be expressed."

Isn't the ultimate "stimulating activity" avoiding getting squashed by that ten-wheeled cement mixer coming up quickly on your right?

And then there are the legal ramifications: Dr. Bryan Reimer -- Research Scientist MIT AgeLab & Associate Director New England University Transportation Center -- noted at the New England Motor Press Association/MIT Technology Conference Engineering Safer Drivers "The law of probability says it's 100 percent certain that someone is going to walk in front of one of these autonomous test cars, or one of these cars is going to kill someone. That's going to set off a chain-of-custody situation. Who is responsible -- the engineer, the manufacturer, the driver? It'll be an ugly legal problem and an interesting area of law where there's a lot of money to be made."

Asking our brains to sit back and chill out and do less than the already do?