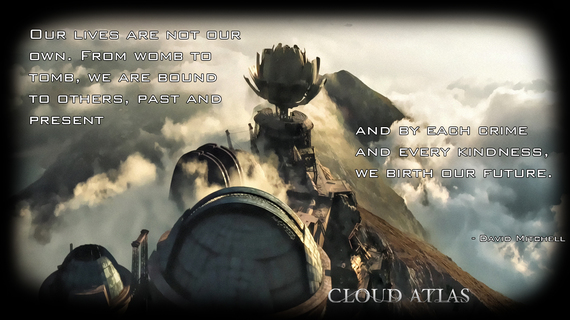 "Our lives are not our own. From womb to tomb, we are bound to others, past and present, and by each crime and every kindness, we birth our future."

The human race has made its first contact with an intelligent alien civilization. You are the one chosen to go and represent humanity and the planet Earth, as we make the first close encounter of the third kind with our new galactic neighbors.

What will be the story you will tell? How can a whole planet, a whole existence be synthesized into a few sentences? The narrative of humanity and the earth as one system can be referred to as:

The Metanarrative
The metanarrative can be viewed as the synthesis of all stories, experiences, history, ideas, beliefs of all humanity. It is comprised of the narratives of all who ever lived. It is not so much a single narrative as it is an intertwining of all narratives reaching from the dawn of humanity and stretching to our destiny

It is the essence of what it means to be human.

The metanarrative is what one of us, in the distant future, will stand up and say when meeting that new alien intelligent race: "I speak for the Earth. And I speak for humanity".

What is the human narrative ?
Is it just a note in the galactic eternal symphony?
Why do we need such a narrative, besides talking to a hypothetical alien race, at some point in our future?

Humanity is changing at a rapid pace. The old myths and journeys do not always fit in our ever-shifting realities. We are living in a different world from our ancestors, facing very different challenges. Our civilization is moving towards a global one.

The old myths do not recount or prophesize how we engage humanity as a whole. We do not have a "Hero's Journey" that tells the trials and tribulations of a collective of diverse peoples.

Furthermore, what is true for the one hero is seldom true to how a collective might set out on their journey. With a group of people, there are so many more variables, archetypes, personalities and story arcs.

What would these new stories and paradigms look like?

To conclude this series of articles, after looking at Breaking away from the Hero Myth, The Gendered Journey, and the New Archetypes of the Champion and the Steward, we have finally arrived at the Collective Journey.

Long time ago, in tribal times, we possessed a sense of oneness. We had stories that encompassed the whole group; we saw all beings as part of our narrative and we had ways of being that insured everyone had their roles and needs met. We told right-of-passage stories to the young ones, and creation myths to make sense of the world and the many complexities around us. But our modern civilization is very different.

As humanity moved away from the firelight, we ventured over millennia to evolve grand civilizations that rose and fell, bringing forth a great many mythologies, pantheons and complexities.

The 'simple' story and the way it was passed on no longer represented who we became as a people. As a result, humanity found itself at a crossroads. Instead of the simple notion of the classic vista of a fork in the road stretching toward the horizon, the road crisscrossed, zigzagged and careened up and down, back and forth like a crazy super hyperspace highway reminiscent of the one in Douglas Adams' Hitchhiker's Guide to the Galaxy.

Image from the film The Hitchhiker's Guide to the Galaxy

Each path represents exponential new choices and roads available to us; leading to probable futures not only for us individually, but for the entire planet.

We are at the beginning of a new era of understanding. A handful of humanity, mainly in first world countries, is changing its perception of gendered states, socio-political leanings and personal life philosophies. Some of us are opening up to the potential of new models for a Collective Journey.

In their journeys, they move beyond their own individual experiences to a cohesive collective that is both the sum of all individuals and also a new entity entirely.

They move between physical interactions in real space, to online digital interactions in cyberspace. Our journeys into outer space, technological advancement, mobile and urban lives, and the Internet, have all created the circumstances for the rise of the Collective Journey. 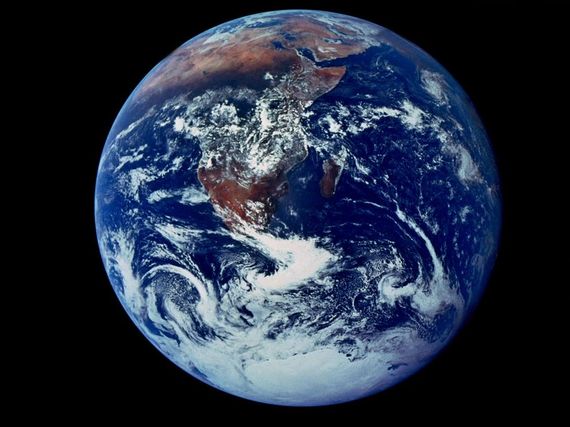 Humanity's Space Age
On December 7 1972, the Apollo 17 crew took the famous photo of the Earth, dubbed "Blue Marble" from space (even though there were other photos of a partial Earth taken before, this was the first taken of Earth in its entirety). This was the first time we saw ourselves, our planet, from an outside perspective. This first photo gave us our entry point to start considering the idea of a planetary society. No other ancient mythology could've given us this glimpse into who we are as a whole.

For some this was a place to start exploring the notion of a global perspective. The Collective Journey can help us move from the individual narrative into this far greater narrative of humanity. It can do that by bringing forward diverse voices, people, ways of being, and opinions. This all while supporting the individual's own journey to reach his/her highest potential.

Our Digital and Physical Selves
The idea of operating from the individual perspective while being part of a collective, and the seamless behavior we are starting to experience as we lead lives online and offline--almost at the same time--both can use the metaphor of superpositioning.

This complex idea is derived from a principal of quantum theory, which describes a challenging concept about the nature and behavior of matter and forces at the subatomic level. Simply put, we can be in two places at the same time. This is an important step in the evolution of the Collective Journey and of us humans.

In his book, Humanity's Global Era: A Dual Paradigm Change, Professor Shlomo Yishai uses the metaphor of Superposition-type thinking, to explain the way we are evolving as a species. Yishai suggests we no longer live a linear narrative but now have ongoing experiences simultaneously in the physical and virtual worlds. Digital natives intrinsically understand the duel existence of their real and digital selves, to the point where one is an extension of the other.

Most of us have had the experience of sitting to dinner--at home or a restaurant--talking to our friends and loved ones who are physically there, while holding our phones and having another conversation on social media. More and more of us are sharing ourselves with the people we are with, and many we have never met through the Internet, which is becoming its own separate but concurrent universe. We are creating a new hybrid existence.

The Global Village
The World Wide Web has, despite all of its light and shadow, brought with it the promise to fulfill Marshal McLuhan's prophecy of the Global Village. Events that are happening halfway across the world can be experienced digitally across the globe, bringing us back to the feeling of a small village.

We can connect with so many people around the world. Millions are arriving online daily. It's the single largest mass migration of all time. Becoming virtual people, connecting our lives and evolving into superpositioned humans occupying both the physical and digital worlds. 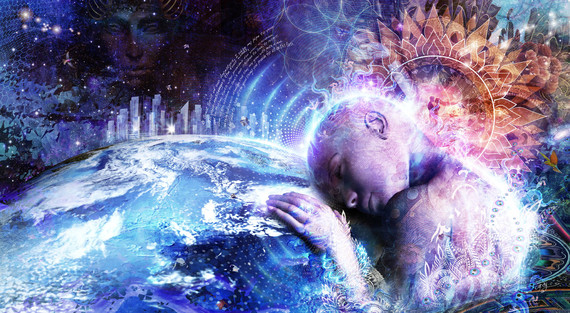 Painting by Cameron Gray A prayer for the Earth

We are evolving and moving beyond our individual, tribal, urban and nation-state selves into an actual global village--a digital interbeing that is both virtual and real (Interbeing is a term used by the Vietnamese Buddhist monk Thích Nhất Hạnh, to emphasize the connection we have with one another and all living things.) It is something new; it is beyond us as individuals.

Stories have always been a part of what makes us human, and new narratives are important in times of great transformations. The ancient stories cannot contain and serve us as we are embarking on changes on a planetary level. We need The Collective Journey as a teaching tool for the masses as we engage on different levels of change and need to come together to work on our most pressing matters. The Collective Journey can become a tool for social movements, climate change groups, and empower groups to change political narratives in geographical areas. These are stories of empowerment that are accepting of all voices, and can bring forth positive change.

We are still in the very early stages of this journey. We haven't truly learned how to collaborate, communicate and support each other, even in our most basic relationships. We don't yet have the full vocabulary, the language to tell this epic Collective Journey. This is where the potential of experimenting with this idea lies. Looking at what is happening at the fringes of society can shed a light on where The Collective Journey is starting to take hold.

In part 2 of this piece, I will offer my take on the Collective Journey creation and how can we start moving towards the greater empowerment of the metanarrative.