In Part 1 of the Collective Journey, we discussed the metanarrative, the narrative that is the synthesis of all stories, history, ideas, beliefs of all humanity, and all of the beings of the earth. We talked about digital-superpositioning, the occurrence that is happening to us as we move from conducting our lives online and offline in unison. In this final installment I will offer a model for the Collective Journey.

We are all co-creators of the human story, each bringing a piece of it, together creating an immersive, interactive and non-linear narrative that stretches through the ages and into the future.

How is The Collective Journey different than from the narratives that stem back to our ancient history?

The last few decades have seen a quantum leap in technological change. Two major seismic events shifted our reality: humanity stepping into space and our technological advances heralding a new age of global connectivity. Our ancient stories never dealt with what happens to a whole human race. They might have talked about whole tribes, cities, and states, but never the whole world.

The Hero's Journey has been used for millennia as a coming of age story, but the Collective Journey is the coming of age metaphor for humanity's rise from adolescence to adulthood. As such, it cannot be a singular narrative, but a convergence of many voices of different genders, ethnicities, ages, and opinions coming together in a non-linear fashion. Glimpses of these experiences are starting to show up in many sub and countercultures around the world. 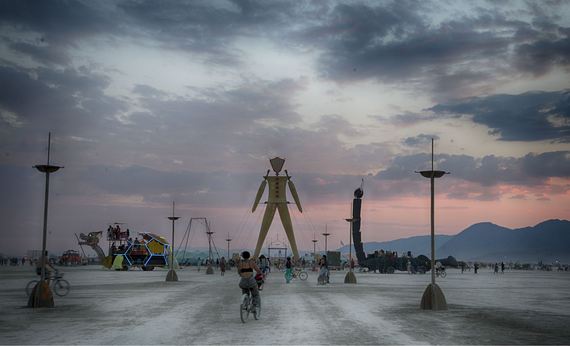 At Burning Man, the counterculture festival in Black Rock desert of Nevada, the ideas of "radical community" and the "gifting economy" both have hailed an event that feeds on massive collaboration between huge groups of people. The event brings forward an experience that is shared not only by the 70,000 participants, but transcends the physical into smaller events and multiplatform media worldwide. Participants build huge structures, sculptures, theme camps and villages, volunteering of their own time, money and skills.

The experience lives on in the millions of photos, videos, games, articles and kindred events that are now year-round. These create an ongoing narrative, which encompasses all of the participants and bystanders, inviting them to play in a bigger sandbox. Offshoots of the event and its inspiration have created a whole new movement of transformational festivals worldwide that are experimenting with collective experiences.

We see the same dynamic arising in startups, hackerspaces, makerspaces and collaborative co-working spaces popping up in major cities across the globe. People are creating new technologies, new social structures, new ways of working that are different from the hierarchal structures of the past few hundred years.

New working systems, such as Holacracy, that break the top-down management system into a decentralized collective of peers, and other modalities that break down the pyramid into complex working structures, are significantly increasing productivity. Events like San Diego Comic Con that assemble masses of rabid fans around shared niche interests, alternate reality games that invite groups of players to interact with narratives that use the real world as a platform, LARPing (Live Action Role Playing Games), and even in Massive Multiplayer Online Games, such as World of Warcraft. These are all examples of the collective in a world that is now finding the singular Hero's Journey less and less appropriate.

These new mythologies are being created and remixed in Temporary Autonomous Zones (T.A.Z), as the anarchist author, Hakim Bey coined them. People get to recreate their social structures and play at being their most self-expressed and actualized-selves within the context of a shared space.

So how does a Collective Journey emerge?
Even though collectives form in many ways, it has been my experience they all progress through a similar process to move from the individual Hero's Journey to a cohesive collective.
The collective is formed by the assembly of different archetypes, coming together at a certain moment in time, empowered by their own journey with each individual bringing their own personal gifts to a higher cause. Creating a fixed and linear model for a fluid, multidimensional, complex system, which is ever evolving, is not a simple task. Here is my attempt at offering a starting point for this model.

The how-to of the Collective Journey: 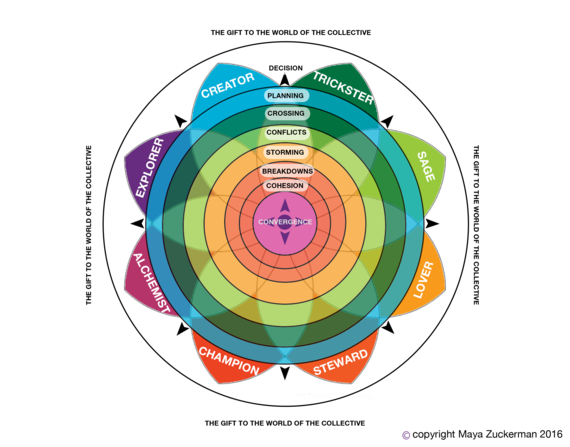 The model is a simplistic representation of the stages that may occur. I've created them in a linear fashion, but in reality it may not happen in that manner.

At times, the driving force for a collective to emerge is a shared vision, goal and intention.
Other times the chaos of a reality throws different people together and focuses them to start on a journey of discovering their collective purpose together.

There are only a few examples of the collective journey fully realized in mass media. Most of the time using the narrative device of throwing a group of individuals together after an occurrence happens, with a supernatural one being one of the most popular.

The Wachowskis Sense8 Netflix drama, is about a group of eight people waking up to being fully connected to one another across the globe: a collective of individuals becoming one interconnected being. Each person is holding on to their individuality and personality--but together becoming something entirely different. Each character is a different archetype, fully realized--but together they become one exponentially more powerful interbeing.

Most current Collective Journey narratives start with a basis in The Hero's Journey and then jump into a collective narrative. The Hero's Journey is still a linear one. For a true collective narrative experience we need to integrate other platforms, other media that can break the linear pattern and create nonlinear, interactive, engaging and immersive experiences. Virtual worlds, augmented worlds, massively multiplayer online games, and other immersive spaces and technologies will hail an era where more collective experiences can emerge. New forms of narratives will evolve to work within these spaces. We are at the very beginning of creating the playground for the Collective Journey to come to pass.

One of the reasons we have been afraid to portray powerful ideas, such as that of a collective consciousness, is because of the many science-fiction examples which showed only one possibility for a interbeing: The archetypal concept of the hive mind, like Star Trek's Borg, which allows for no personal thought, identity nor individualism, is frightening. Fear of totalitarian regimes that forsake the individual for the crowd also scare us away from looking into what is naturally emerging in our social structures.

The digital interbeing that is the Internet can be a frightening place, where extremely angry and polarizing voices can be found. But if we look closely we can see a new narrative emerging through diverse groups. They are still at the fringes but are starting to enter into the zeitgeist of society. If we focus our lens more on them, we may see that there is hope for a positive Collective Journey. For every atrocity that humanity has inflicted upon itself in recent years, the outcry for unity, love, collaboration, and peace has grown stronger. 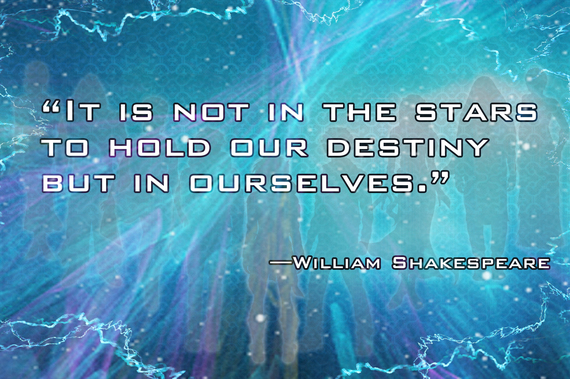 We are more connected, aware of each other, and in communication than at any other time in human history. We are standing at the threshold of a future, which we can help forge because of the accessibility of digital communication. But to do so, we must understand the collective approach in the way that we once understood the individual heroic approach.

How can we align the entire human race to powerfully choose a narrative that not only serves certain individuals, but also serves humanity as a whole? A narrative that both invites each of us to take part in this wonderful, ever-evolving epic story.

Digital communication and pervasive media allow us to choose our journey and how we want to embark on it as a collective. This is our time to create a shared human narrative, and to embrace the positive social movements of the world. If we do, we can engender planetary peace and cooperation through our interactions, heralding a time of economic and ecological harmony, ending environmental destruction, and elevating the marginalized among us to the equal status of 'full human being' regardless of gender, sexual preference, or ethnic background.

It's time to start writing humanity's epic story together!