When I was learning to fly, one of the lessons was that if you see an object on the horizon that is seemingly stationary but getting larger, watch out. It is probably an aircraft closing with you.

Trouble with China in the South China Sea is on the horizon of U.S strategic concerns and getting larger. A major confrontation may be at hand.

China claims sovereignty over the Spratly and Paracel islands in the South China Sea. Its claims have been disputed by Brunei, Malaysia, the Philippines,Taiwan and Vietnam. 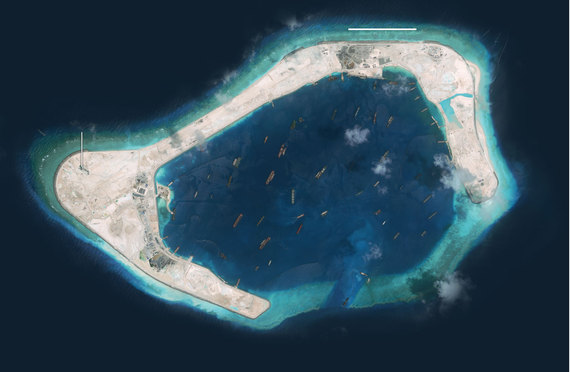 Ignoring these neighbors' territorial claims, China has built artificial islands on otherwise submerged reefs in the Spratly archipelago. They have built runways, capable of landing military jets, on Fiery Cross and Subi reefs, and are building one on Mischief Reef.

Vietnam and the Philippines have also built up reefs, but on a smaller scale, and mostly to help their fishing fleets.

Offshore islands, real or summoned from the deep, are trouble. Argentina and Chile nearly went to war over the Beagle Channel Islands, off the inhospitable tip of South America, until Pope John Paul II brokered a peace deal in 1984.

Britain and Argentina most certainly did go to war in 1982 over the Falkland Islands, which Argentina claimed then and still claims.

Nations use territorial disputes not only to divert attention from domestic problems, but also to heal the real or imagined wounds of history.

China feels, reasonably, that it was kicked around in history. Britain occupied parts of it, most notably Hong Kong, and then acted as a drug lord in the 19th-century Opium Wars. In the 20th century, China was invaded by Japan.

Now, as the world's second-largest economy and most populous nation, China is feeling assertive.

But all of Asia and by extension the rest of the world is invested in this dispute: one third of the world's shipping passes through the South China Sea, and its rich fishing grounds are a vital food source for the region.

The Chinese bolster their claims with a 1947 map showing what is known as the nine-dash line, or the cow's tongue because of its shape, in the South China Sea. This line extends around the sea and encloses 90 percent of the area; by historical standards this is a whopper of a claim for territory, and one which threatens U.S. allies in the region as well as our shipping.

The Chinese claims appear to be in total violation of international law, particularly the United Nations Convention on the Law of the Sea, which the United States has not ratified, and which China ratified in 1996.

The dispute with claims and counterclaims is laid out in a new, dispassionate report by the Boston Global Forum, a Harvard professor-heavy think tank.

On Oct. 27, the United States responded to the China's claim of territorial integrity for its artificial islands after a long delay, testing the right to navigate by sending the USS Lassen, a guided-missile destroyer, through the 12-nautical-mile zone off Subi Reef. China has reacted angrily with aerial exercises.

The USS Lassen's transit of the reef appears to have divided the White House. At one point, Defense Secretary Ashton Carter would not acknowledge in public that it had actually happened, or that U.S. aircraft might test the Chinese claim to territorial air rights.

These actions are known as freedom of navigation operations, or FONOPS. It is a term we will hear more of if the United States and China cannot divert from their brinkmanship in the South China Sea.

The United States does not favor any nation's claim to islands, or even rocks, in that sea. It does, though, have a vital interest in checking Chinese expansion and the interests of its Asian allies, who expect a robust U.S. response to China's island grab -- and claim to a whole ocean. -- For InsideSources.com