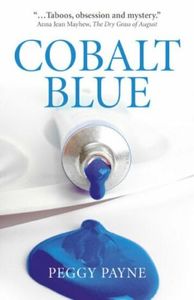 A topic frequently discussed with my shamanic clients is that of spiritual emergency, how it looks, feels, manifests in daily life. But of course the path from pain to enlightenment can be challenging to describe. We expect miracles, visitations, supernatural intervention.

In reality, awakening comes in more mundane trappings, and we often don't recognize it for what it is. Distinguishing the sacred amongst the rubble is an acquired skill. Sometimes fiction is more relatable than truth, and in this case, Peggy Payne's latest novel, Cobalt Blue, paints a beautifully intense portrait of the modern soul's calling to something greater.

No stranger to awkward spiritual epiphany or the dramatic ways it expresses itself, Payne has explored this territory before. In her first novel, Revelation, she delves into the life of Swain Hammond, a young minister who believes God is speaking to him, and as a result is ostracized by his congregation. In her novel, Sister India, she probes deep healing for guesthouse manager, Madame Natraja, through unconventional spiritual methods.

Payne makes hard transpersonal demands on her characters, and Cobalt's Andie Branson is no exception. A thirty-something artist in the frou-frou enclave of Pinehurst, North Carolina, she finds herself in the throes of near-constant ecstasy, compelled to illicit affairs and obsession with sex. Stepping through all the conventional medical, psychological, and even esoteric channels, Andie's journey to understanding the awakening of her life force takes her to intense and potentially harmful extremes. Even once she figures out what's going on, she can't hold it in perspective, as, "In her mind, she tried out the lascivious-sounding word: kundalini. Even saying it silently was arousing, a perverse invocation; it was meddling in psychosis."

Indeed, the profane is sacred in Payne's world. She possesses a skill for taking everyday characters and putting them through the paces of exceptional experiences that they don't know how to cope with. Her readers run the gamut with them. In the tradition of the shamanic narrative--stories of thriving beyond the wound--she conveys an ancient spiritual rite in the wrapping of modern cultural. "I view these as realistic stories," she says, "not fantasy. It's crucial to stick with the emotional/psychological truth for the story to have any meaning."

Of course, meaning is where it's at. Among her own exceptional experiences, Payne notes, "While I was working on Cobalt Blue, I took a course with a teacher who had a reputation as very knowledgeable on kundalini. Sitting across from her at lunch, I noticed a small ball of light, about the size of a pearl onion, rising from just above her head toward the ceiling. The white bubble didn't give me the idea for Cobalt Blue, but it certainly was validating. It has affected my view of 'things seen and unseen,' my view of what's possible, ever since."

As such, through her healing stories Payne expresses the reality of spiritual emergency in a tumultuously realistic light, yet she never loses the fine silver cord connecting them to profound spiritual guidance.

On Andie's resolution to her soul dilemma, Payne says "Kundalini seemed to me like a rip tide; you have to swim across it and not against it."

Sage words from a fiction force.