Our attention has been rightfully turned to the stomach-churning photos of women being dragged by the hair through the streets of Egypt and Bahrain, and reports of yet more deaths in Syria. As this year ends however, it is worth noting with a bit of apprehension that Iran has been relatively quiet compared to its neighbors. In fact, when John Dudin of the New York Council on Foreign Relations reviewed the ten most significant developments in the Middle East in 2011 Iran did not make the list at all--even after the downing of the US drone earlier this month. Either things are improving and we are learning to better deal with Iran, or this is merely a pause in a decades-long estrangement which could turn violent, providing a shock to the global economy it might not be able to withstand.

War with Iran would mean the closing of the Strait of Hormuz, where the Iranian Navy began ten days of war games to practice doing just that on December 24th. At least 30% of all seaborne oil shipments pass through this chokepoint. Oil prices have been rising on the strength of the maneuvers alone: an actual blockade would double the price of oil overnight.

Now that America's withdrawal from Iraq has been formalized, and Osama bin Laden, Hosni Mubarak, Muammar Gaddafi, Ali Abdullah Saleh, and Zine el Abidine Ben Ali have all been vanquished, after a year of unbelievable changes throughout the Middle East, my prediction is that Iran is about to regain center stage in the region. As a result of the US withdrawal, Iraq could be prone to more violence, and the Iranian leadership must certainly have taken note that none of the toppled leaders, including Sadam Hussein, possessed formal nuclear capabilities. 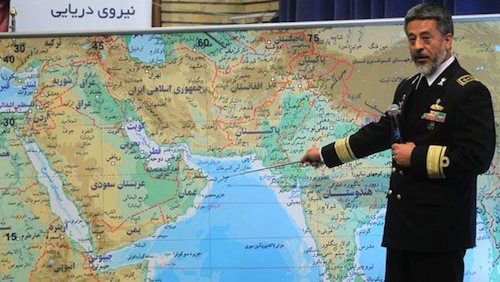 Iran's Navy Commander Habibulah Sayari points to the Strait of Hormuz at a news conference on Dec. 22nd

The first act is already being played out in Syria, the only Arab state to align itself with Iran, and in the streets of Bahrain, its neighbor under Saudi control. The Saudis and the Israelis are mulling diplomatic as well as military options to stop Iran from developing a nuclear weapons capability in a revolutionary neighborhood. How successful have their covert operations been in 2011? Narimon Safavi, Iran expert and contributor to our book What's Next? thinks that they have been quite effective, and that now is not the time to change tactics. Changing the status quo would be of no benefit to Obama either.

Trita Parsi, head of a Washington think tank focused on Iran and author of an upcoming book by Yale University Press, A Single Roll of the Dice: Obama's Diplomacy With Iran believes that the Obama Administration has abandoned diplomacy often and quickly, and that this could create an accidental crisis that could spin out of control quickly. A desperate Iran--its currency has lost half of its exchange value in the past two months--might make desperate decisions.

Indeed, the US is moving to isolate Iran. The US Treasury Department announced new Iran sanctions in 2011. Congressional action is expected which would make it difficult for financial institutions in third countries to do business with Iran, and for the Iranians to get paid for their oil. Diplomatic overtures by Hilary Clinton and the State Department urged India to join the oil embargo against Iran. This is an initiative that seems to be supported across institutional and party lines, unlike almost any other issue in Washington.

Pressure against Iran can be subtle and pervasive, and is not confined to business. I am a board member of NIAC, National Iranian American Council. Members are mostly Iranian expats here in the US who support cultural exchange and a peaceful relationship between the US and Iran. After submitting a grant proposal, NIAC was recently told that the Macarthur Foundation "does not currently provide support for projects related to Iran". They are not alone; this is true of many major foundations in the US, which I find astonishing. Less knowledge of Iran than we already have will hardly augment our understanding of a country that we all agree is of such strategic importance to our national interests.

Persian, the official language of Iran, and its cousins are spoken throughout the Middle East, and it has been deemed a critical language. The year I graduated from the University of Chicago, one of the few centers of Middle Eastern studies in the US, other than myself there was only one other undergraduate who majored in Near Eastern Studies with Persian as the language elective. Things are not much better today. According to the Modern Language Association, only .001% of language learners in institutions of higher learning study Persian, about 2000 students nationwide. On the other hand, I have seldom (maybe never) met an Iranian college graduate who did not speak English. And unlike Michelle Bachman, all of them know that we do not have an embassy anymore in Tehran.

The point is, and the point that Trita Parsi makes in his excellent new book, is that due to the lack of understanding between our government and Iranian leaders who have been isolated from the rest of the world, war will not be a decision, but a mistake. Both nations face political transition and deadlock, and Parsi says in an oped in the Los Angeles Times that in this impossible landscape diplomacy can falter:

In Iran, political cannibalism within the Iranian elite has reached new heights. While this has not necessarily given birth to a new Iranian adventurism (beyond the harsh rhetoric), it has paralyzed the state and weakened its ability to maneuver in a changing strategic environment. This is particularly the case when it comes to crucial issues such as its relations with the United States.

The U.S. military leadership is rightfully worried about this situation. The chairman of the Joint Chiefs of Staff, Adm. Michael G. Mullen, has repeatedly raised the lack of communication between the United States and Iran as a major concern in the last few weeks.

"We are not talking to Iran so we don't understand each other," Mullen said last month. "If something happens ... it's virtually assured that we won't get it right." The lack of communication has planted seeds for miscalculation, Mullen argued. And miscalculations often lead to dangerous escalations.

Parsi faults Obama for allowing the same neoconservatives who brought us the war in Iraq to frame the Iran debate as well, for not creating "a new metric of success in our dealings with Iran." He quotes Albert Einstein: "You cannot prevent and prepare for war at the same time".

Here in Chicago, I take comfort in Narimon Safavi's opinion that actually things might be getting better between Iran and the US. He agrees that the recent handling of the drone incident, whatever the backstory on that might be, could be an example of a successful handling of a crisis. Both sides have nothing to gain from war, and it is an election year in both countries, so domestic concerns will be a priority.

I hope Safavi is right. I do agree with Parsi however that we need to create a new metric, change our frame of reference and institute smarter policies. If success can only can be claimed if Iran is never allowed to have a nuclear weapon, then we are probably bound for a major policy failure.

Giving up on this goal is just one example of how I think we need to change the way we deal with Iran. Given the neighborhood that Iran inhabits, and the US military presence there, it is not irrational for Iran to consider nuclear armaments. By treaty, Iran is entitled to build and develop nuclear energy, and that is what they say they are doing. The received wisdom however is that the nuclear materials that are used for this purpose are a hop, skip and a jump away from creating a nuclear weapon, and this "we cannot allow".

No matter what the protestations are from Washington or the denials from Tehran, I firmly believe that ten years from now Iran and perhaps many other countries will have nuclear warfare capabilities just as Pakistan does today. We can delay things, by assassinating physicists and also attacking software. But eventually, they are going to have a nuclear weapons capability. Given that, wouldn't it make more sense for us to ensure that we are part of the process, and that development is transparent? I would even give them aid to ensure that we are deeply involved.

Also on my list: stop calling Iran a "failed state" which it is not, it is rather a totalitarian state, reopen diplomatic relations at some level, increase educational funding in the US for all things Iranian, hold high-level discussions with the Iranian-American community and enlist their aid (Obama has never met with Parsi, and should) increase cultural exchanges of all kinds, do everything possible to protest human rights abuses in Iran, increase rather than decrease business ties, link their currency to the US dollar...wait, that all sounds just like Nixon's China policy! Maybe this is something a Democrat just cannot do.

My July article for Yale Books on Iran focused on the threat of a major earthquake in Tehran, and I called it
"A Lamentation of Black Swans: Economic Disaster in Iran"
. 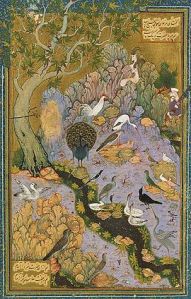 'The Concourse of the Birds' painted by Habib Allah

Given my love of unusual plural words, I was delighted when I was recently given lovely present by a friend who knows of my interest in Persian culture. It is a book, beautifully conceived and illustrated by Peter Sis, based upon the famous Persian poem "The Conference of the Birds". The story is about the gathering of birds of all kinds and types, who are brought together by the fear of an unspecified danger. In order to escape this peril, they fly together to faraway valleys to find their mysterious, god-like ruler, Simorgh so that he might save them. After reaching the mountain of Kaf where Simorgh resides, they see their own images in the mirrored surface, and discover that they themselves are their leader. Simorgh exists inside every one of them.

There is a wonderful lesson here. If there is danger ahead, then perhaps we would all be wise not to depend upon our leaders, and instead, depend upon ourselves collectively and individually, to ensure that we will not find ourselves at war once again. War with Iran would be irrational, and is the biggest black swan event of 2012 with the potential to derail the fragile economic recovery we are now experiencing. Both Safavi and Parsi agree that it is a possibility under certain circumstances, and therefore we need to consider the damage that would result, and do everything in our power as citizens to prevent it. Better not to place all of our hopes in our leaders. Wikileaks in many ways represented the end of the old diplomacy, when everything was kept secret from the huddled masses. We must now become our own diplomats.