Astronaut Sally Ride didn't deliver college commencement addresses. The first American woman in space -- whose 1983 journey through the ultimate glass ceiling convinced millions that they, too, could do anything -- annually declined invitations to help launch graduates into the real world. When she died at 61 in 2012, still unwilling, or perhaps too modest, to reduce wisdom to sound bites, her legacy was her heroism. In countless other speeches, she shared the magic of her space shuttle journeys without proselytizing. Through her company, Sally Ride Science, she helped middle school girls study and stay in the fields of science, math and technology, urging parents and teachers, "We need to make science cool again. It's a national imperative."

Among the only advice she directed to youngsters themselves came after describing how, as a graduate student in astrophysics in 1977, she saw a headline in the Stanford Daily announcing NASA's search for female astronauts. The article changed her life. "So I guess the message is, read your college newspaper," she deadpanned.

Better than "Wear sunscreen" -- and she actually said it.

Today's fledglings about to be shoved from their academic nests were born long after Sally retired from the space agency. Her catchy name resonates only from their history texts, an icon from an abandoned program whose distant achievement seems as unremarkable as the likelihood of a female president. But as Sally's biographer and her friend of 30 years, I think her bold mission to the stars also addresses the gravity of twenty-first century Earthlings, and I've teased out some lessons from her exemplary adventure. Live by these, Class of 2014, and you will fly high without ever leaving the planet. 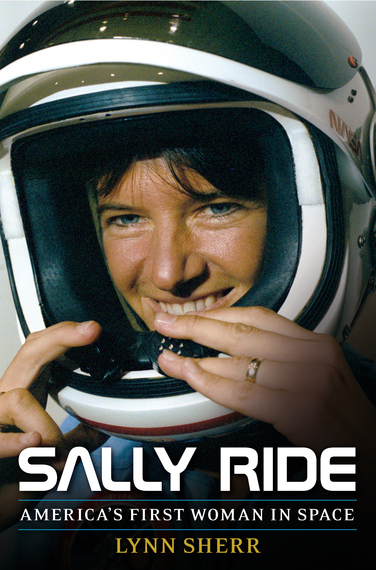 1. Luck is good; preparation, better.
Sally understood that her timing was impeccable: born to enlightened parents who believed in education; schooled during the upsurge of science after the shock of the first Soviet satellite; selected amidst the women's movement, which pressed for female astronauts. She was, she knew, lucky. But she also understood that years of hard work elevated her candidacy among more than 8,000 applicants. So when she saw the job description, it was easy to say, "I can do that." The magic words: "I was ready."

2. One plus one equals way more than two.
A ranked junior tennis player, Sally preferred doubles to singles, a dedication to teamwork that would later get her to orbit. As George Abbey, head of the shuttle Selection Board, told me, "You've got to be able to work well with others. It's not a place for someone who wants to be a star unto himself or herself."

3. Master the pivot.
Sally hoped to be a professional tennis player, and quit college briefly to work at it. When she realized that something ("My forehand") wasn't good enough, she dove back into physics, which led to space history. Game, set and match.

After NASA, when Stanford, her beloved alma mater, denied her a tenured professorship, Sally relocated to the University of California, San Diego, where she taught -- blissfully -- for years. Her ability not to dwell on the past, to move on when things didn't work out, likely saved her a fortune in psychotherapy bills.

4. Carpe Diem ... and the Noctem, too
It wasn't just about seizing the day, and making the most of it; it was about living it, fully, in the moment, day and night. "I'm not a goal-oriented person," she explained repeatedly. "I don't look out into the future and say, 'Five or ten years from now, this is what I want to be doing, there is where I want to be.' I'm very much a person who gets very, very involved in whatever I happen to be doing now." In other words...

5. Focus. Focus. Focus.
Sally was a superb compartmentalizer, able to shut off various rooms in her mind until she needed to visit them. That survival technique served her well. As a student, she could study through a whistling teakettle. During the run-up to her first flight -- when the novelty of America's first female astronaut after a quarter century of white males turned the press and the public into predators -- Sally cherished the protective seal of the NASA bubble. She stopped watching television, ignored the papers. If the barrier was breached -- if someone trespassed her privacy zone -- she could, in her terms, "flip the switch marked 'Oblivious.'"

6. The Light Stuff.
And when she couldn't tune them out, she made them laugh. Sally's inborn ability to keep cool under pressure -- a trait she honed at the altar of The Right Stuff -- was leavened by a playful love of mischief. And sharp wit. At the preflight press conference, when a Time Magazine reporter asked how she responded to problems or glitches during training ("Do you weep?"), Sally smiled ruefully, shook her head, turned to shuttle pilot Rick Hauck and said, "Why doesn't anyone ever ask Rick those questions?"

7. It's OK to bite the hand that feeds you, if you have the facts.
Sally's commitment to science -- what is, not what we want things to be -- informed both her research and her steadfast aversion to hogwash. It also guided her as the only Shuttle astronaut on the boards investigating both the Challenger and the Columbia accidents, hideous explosions that took the lives of 14 astronauts and prompted major NASA reorganizations. In both cases, based on key evidence that she either uncovered or interpreted, Sally helped lead crushing criticism of the space agency, with its flawed decision-making and unrealistic launch schedules. Once the bright new face of NASA, she became its conscience.

8. Follow your heart...
During her post-Shuttle press tour at an international space symposium in Budapest, Sally was warned by the U.S. State Department that because of cold war hostilities, she should avoid Soviet cosmonauts: no greetings, no hugs, no front page photos of chummy vodka toasts. But when an opportunity arose to visit with Svetlana Savitskaya -- the second woman in space, who'd beaten Sally by nearly a year -- Sally snuck off to a midnight meeting that created a rare camaraderie. The secret rendezvous with one of only two other women who'd toured the cosmos touched her deeply and magnified her global awareness. She never briefed Washington.

9. ... on matters public and personal.
While at NASA, Sally was married to fellow astronaut Steve Hawley, a five-year bond that dissolved into a respectful friendship. Then she entered a loving partnership with Tam O'Shaughnessy that would last nearly three decades. Fiercely private, Sally never advertised her sexual orientation, never acknowledged the shame and fear that an intolerant society can inflict even on its heroes. Nor did she let it intrude on her ability to appreciate what really counted.

10. Enjoy the ride.
When Sally returned from her first flight in June 1983 after helping deploy two satellites, flexing the Shuttle's robot arm and seeing the miracle of our planet from a few hundred miles high; after accepting the congratulations of President Reagan and the adulation of the world; she said from the tarmac, "The thing that I'll remember most about the flight is that it was fun. In fact, I'm sure it was the most fun I'll ever have in my life." She was 32.

Years later, she elaborated on her statement while facing an auditorium filled with one thousand youngsters: "Imagine this room in space, and you could do 35 somersaults in a row. My favorite thing about space was being weightless. There's not even a close second."

Back on Earth, she also found joy in the everyday, greeting each morning with a smile. For that kind of sunny takeaway, you don't need a cap and gown.

Lynn Sherr is the author of Sally Ride: America's First Woman in Space (June 3, Simon and Schuster) and an award-winning broadcaster and author who spent more than thirty years at ABC News. She reported on the NASA space shuttle program from its inception in 1981 through the Challenger explosion in 1986. Sherr's numerous awards include an Emmy, two American Women in Radio and Television Commendation awards, a Gracie Award and a George Foster Peabody Award. Her books include Swim, Outside the Box, and America the Beautiful, among others. Follow her on Facebook and Twitter.

Author of 'Sally Ride: America's First Woman in Space' and an award-winning broadcaster and author