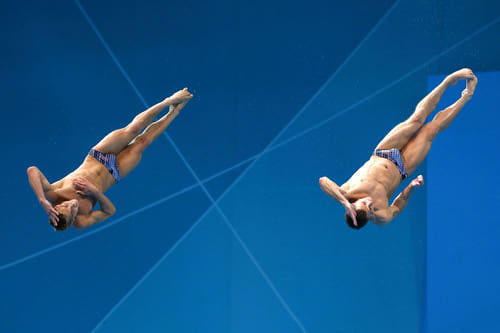 Watching the 2012 Summer Olympics, we got to thinking about what it takes to arrive at the pinnacle of one's sport. What is the competition mindset and how does one acquire it?

As an Ironman World Champion, Mark knows a lot about competing and winning. But it wasn't always this way. In fact, when the two of us first met, Mark was struggling to get to that next level of performance, despite the fact that he was in perfect physical condition.

We worked on helping him learn how to think of fitness in broader terms--in terms of spirit and emotions. Once he had developed a fit soul, in addition to his already fit body, he was able to compete successfully on the world stage. Mark went on to break the world triathlon record and win six Ironman Triathlon World Champion titles. Having a fit soul is the secret to acquiring the competition mindset, which is what you need in order to be an Olympic-caliber athlete.

Most athletes and other competitive people, such as entrepreneurs and business leaders, believe that winning is about working harder. Certainly there's hard work involved, but success in any venture is really about living your life beyond limits. We see the "impossible" take place over and over in the world, but we often take it for granted. A leaf transforms the energy of the sun into nourishment. We eat food and transform its energy into fuel for our bodies. These simple yet profound events happening every moment of the day can be used as a model for our own ability to reach the next level of success.

Here are a few strategies that contribute to achieving success with the competition mindset.

Challenge your limits; create a new concept of normal.
Stop thinking in terms of goals. A goal can sometimes be an invisible kind of boundary or limit. It can be a target that becomes the "normal" place we're reaching for. It's often these concepts of normal that keep you from exploring new ground. However, changing your perspective by redefining what can be normal for you can free you from any self-imposed limits. One way to do this is to completely interrupt your normal behavior with a favorable, but extreme, change--whether in exercise, food, or soul--for a short period of time.

For instance, to reset a workout boundary, for two weeks increase your workout time one day a week by 50 percent. This will definitely feel challenging. Then in the third week, reduce your increased workout by 25 percent. What you will experience now is that the 25 percent reduced workout feels easier than your original long workout. You now have a new "normal."

Harness possibility with a mental exercise.
We call this weight lifting for the soul. Competitive athletes and other high performers are often held back more by their negative emotions than by their mental and physical abilities. Practice giving up thoughts that are weighing you down.

This can be very challenging, but give it a try. Instead of "This is too hard," let the thought be "I have all it takes to make it through." Instead of "This is a waste of time," ask yourself "What can I learn right now?" Instead of "I don't have the time," ask "How can I make my next steps a success?" Lift the weight from your soul and let the positive aspects of life become your identity.

Overcome self-doubt by taking action.
We can remedy "what ifs" simply by taking action. Action creates joy, hope, and positive thoughts, and sustains our health and fitness goals. A number of studies have corroborated the fact that exercise has a positive and significant effect on people with depression. The act of moving your body, and doing it consistently, helps to counteract negative emotions, such as self-doubt, that get in the way of your competitiveness.

Bottom line: when self-doubt about reaching your destination starts to creep in and you feel you "can't do it" or "will never get there," there's a simple remedy. Take action. Start moving. And do it consistently--every day.

Seek power and energy from the earth.
At age 37 Mark went to Hawaii to defend his title as the returning World Champion, competing against other triathletes nearly half his age. In the bike portion, a 24-year-old German flew by Mark as if on a motorcycle. By the end of the bike segment he had amassed a lead of more than 13 minutes. Soon three others passed him as well. Mark was feeling defeated, discouraged, and ancient.

And then he remembered a simple tip Brant had taught him. His body and soul were already in great shape. All he needed was a little help. "Everything is alive," Brant had told him. "The trees, the stones, the earth. Call out when you need help." He called out to the Big Island, standing over 30,000 feet tall from its base at the ocean floor to its highest point atop Mauna Kea. Its power is undeniable. Mark called out: "Help me! I'll give it everything I have, but I need your help!" He began to gain steam. At mile 23 of the marathon, he finally caught the leader, three miles after that he closed out his Ironman career with a sixth World Championship title in a race that would go down as the greatest comeback in Ironman history.

Competing and winning are about more than working out and working hard. Learn how to develop a calm, confident, optimistic mindset bolstered by a balanced life. A fit soul, along with a fit body, will help you succeed at anything.