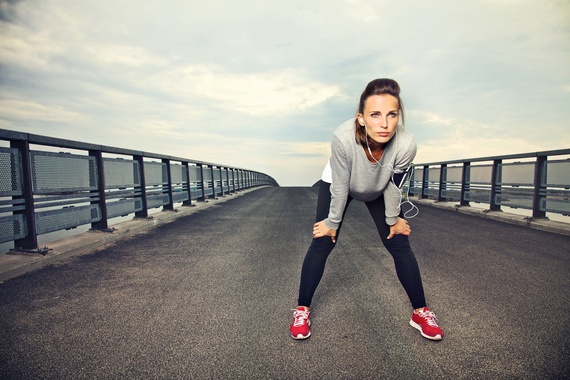 If anyone ever tells you that women aren't as competitive as men, I hope you call bullshit. Women are by far the most competitive of the genders. No, we may not lay awake, strategizing our softball play-by-play the night before a big game, or demand an arm wrestling match to prove that we are in fact the strongest woman in the room (trust me, we have our ways), but we are more competitive than any group of men you'll ever meet.

As women, we're programmed to simultaneously take on, and handle a lot at once. Some call this multitasking, or juggling balls in the air. I call it a cluster-fuck, same thing. And as we age, and mature we become masters of this fine art.

As a young woman I recall doing various paid jobs that required running errands for odds and ends, completing a to-do list a mile long for my boss, or managing multiple office projects at one time. I was good at it, really good. But it felt like second nature, not a skill.

And as I grew close to many of my girlfriends, I finally understood, this wasn't a "me" thing, it was a "woman" thing. We were all running around with our heads cut off, trying to get as much done as we could in as short amount of time as humanly possible. It was like a constant race, and while we weren't competing with each other in those instances, we were most definitely competing with ourselves.

I've been known to be hard on myself for doing something less than perfect, especially if I had done it perfectly in the past. Why must I always live up to the standard I unconsciously set for myself way back when? --Because, I'm a woman.

Now, put that same woman out in a social scene and pressure her to find a partner. Because let's face it, she won't be this youthful forever and her eggs are only getting older, right? That's just another expectation that almost every woman feels necessary to check off her own to-do list. Find a partner, get pregnant, and then figure it out.

Her peers and friends will become her competitors once she begins comparing herself to them for a man, or a paycheck, as a wife, or mother of the year. This will inevitably happen. We are human, and as women we are socially pressured to meet unrealistic expectations for our family and ourselves. So when we see others doing better than us, or more than us, we become jealous, defensive, competitive.

Who will find a partner faster? Who will get the bigger engagement ring? Who will have the larger wedding? Who will be the "happiest?"

The pressure can be unbearable, but we plow through for the good of the whole, whatever that whole may be. But now we're stressed and exhausted, and we haven't even had our first child yet.

And even trying to conceive a child has taken on its own social, cultural and political role in this world. It's almost become taboo and inappropriate to talk about.

Those of us who've had children are criticized for not understanding the struggle of infertility. Those of us who had a hard time conceiving but were successful in the end are offended by the fertile-myrtles of the world, but still chastised by the ones who have yet to conceive. And those of us who still haven't been able to have one baby after years of trying everything in our power, feel hurt and are scrambling to find the meaning in it all. We feel empty, left out, misunderstood and completely flipped on our heads.

But can I share something with you that applies to every single circumstance each woman will experience regarding having children? The reality is NEVER what we expected. It's a far cry from the dream.

As young girls, fantasizing about our future, we began compounding expectation upon expectation onto ourselves. This thing called "motherhood" for those who are blessed enough to have children is NOT cute, or even mostly fun. It's SO much harder. This thing called "trying to conceive" for those who are struggling and reeling with the feeling of failure; the reality of infertility is SO much harder to deal with than anyone could imagine. This wasn't the plan. It's not fair. And yet among these sub-cultures of women, we are still competing.

Who has more children? Who breastfeeds? Who feeds their children organic meals ONLY? Who has their kids in the best schools? Who's still the "happiest?"

By the time we've had our first, second, or third child, we are so depleted with failed expectations that we've left no room for forgiveness of ourselves, or each other.

We've made life incredibly hard and will continue to do so by passing down the tradition of high expectations and maintaining high stress levels to our children. Because what we have been taught and continue to exemplify is the notion that if you're not stressed to the max or surpassing unrealistic expectations, than you're just not doing enough. This is our modern-day woman's mentality.

Some days I wish I could have the simple mind of a man. Yes, I said it. Simple-minded, and I don't mean that in a negative tone. I mean it for exactly what it is. In most men's minds, things are simpler, easier, and less stressful. I long for that feeling.

But I am a woman. That's not how I'm programmed.

So what now? Well, now I look in the mirror and ask the hard questions. I separate the important from the unimportant; the real from the fake; the benefit of the doubt from the judgments, the love from the darkness.

And I make a choice.

It doesn't mean I won't be the same woman I was before with a competitive nature to boot, but I might be an improved, insightful, more aware version. Offering up a hand to the woman next to me, struggling, stressed out and expecting more from herself than what's fair.

And in that moment I hope I'll lend my strength and my lessons to her. To help her, not compete with her.

Because there is a difference.

Originally published by Appetite for Honesty by Alison Chrun