I came to hate Mother's Day and Father's Day at a young age. It's not that I didn't have any people to celebrate, rather I had too many.

Mother's Day List:
Mother
Mother's Same-Sex Life Partner
Grandmother
Whomever my Father was married to at the time.

That's a lot to be grateful for when you are a fundamentally ungrateful child. What I wanted was a day to tell my Mommy she was the best, most special-est Mommy in the world, but I had all these other obligatory people to celebrate as well. I felt it watered it down.

Fast-forward, and I am now a divorced parent who has provided (whether they wanted me to or not) an additional father-figure for my children. Their biological father is still an active and positive influence in their life, and now they have a Quasi-Step-Father as well. (We live together in a committed family structure but do not plan on legally marrying. The complications of finding a word for that have yet to be resolved to either of our satisfaction.)

The irritations of the parents are indeed visited upon the children.

It took my youngest child the longest to accept my SigO as someone he wanted in his family, but this past May, instead of drawing the usual picture of Mama, Boy One and Boy Two, he actually included his Quasi-Step-Father on my Mother's Day/Birthday card. (He was confused about what we were celebrating, but he knew it was all about Mama.) He even gave his QSF eyes and a smile, but not eyelids. Eyelids are probably too much to ask for for any of us. 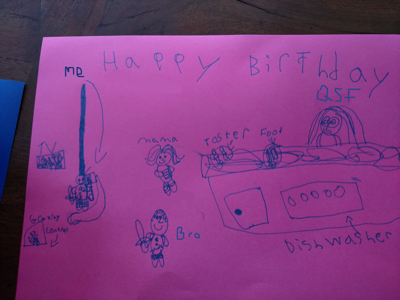 Father's Day rolled around as it always does, and of course my Mama heart hoped my children would want to recognize my SigO in addition to their father. Let's be honest, us grownups look to these Hallmark holidays as validation that we aren't screwing up too badly. I had secret plans of awkwardly forcing them to make breakfast or something reluctantly sweet, but my SigO stopped me.

"I don't ever want the boys to think I am in competition with their father. This is his day," he said.

I stepped back and realized the validity of his words. I remembered the truth of my childhood: the more you try and force children to bond with someone, the less likely they are to do so. The best thing I can do is just get out of the way. Let them bond when they are ready, in the way they find most comfortable, and never, ever make them choose between all of their parental units.

There is a national Stepfamily Day every year on September 16th (who knew?) so I can force them into a Hallmark moment then, if I want to. Somehow, I don't think I will.