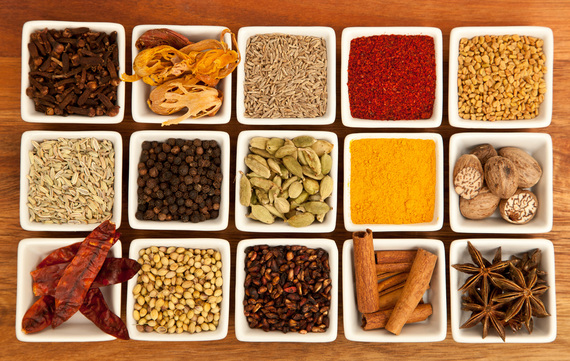 While hiking in Arizona, on a recent girl's trip with my best friend and co-founder of Little Global Chefs, we were exchanging some recipes that would be good for our kids (seriously, all we can think about is food, even when we're working out). When she explained to me about a dish she loved to make for her kids, an Indian "curry dish" with chicken and veggies over rice, I chuckled and casually responded saying, "Oh Marianne, there's no such thing as "curry," like at all." Totally stunned, she said: "Um, what? Then what have I been making...?! I put curry powder in there and it's saucy, isn't that what a curry is?" Being of Indian origin, I've heard the misuse of the word "curry" a lot. And while I rarely correct people, it bothers me that "curry" has become a sub-genre of Indian food, when in actuality it never was a food group, ever, in India. We'll come back to this.

At Little Global Chefs, we talk a lot about introducing new flavors to kids and expanding their palates with spices and tastes from all over the world. We also think it's important and empowering for kids to know the proper names of the foods that they're eating because it makes them even more knowledgeable and appreciative of what goes in their mouths. Just like we don't hide the spinach in our smoothies, we don't like to dumb down names of multicultural dishes, because well, kids are not as dumb as we think -- they're actually smart and capable little people! So at a Korean restaurant, your kid's not eating "fried rice," he's eating bibimbop. At a Thai restaurant, he's not eating a stir fry, he's eating pad kra prow. We believe that transparency is a key ingredient (PUN!) to helping your kids become more well rounded eaters, and another way to get them to be less picky (WIN!)

So let's get back to the whole befuddled curry conversation. Marianne looked at me like I had two heads -- how could her dish not be a curry? Maybe it was the desert heat getting to her, but I think I was witnessing her mind getting blown. I proceeded to explain that "curry" is not even a word in India. No Indian (right, my fellow brown folk?) would ever refer to an Indian dish with gravy or sauce as a "curry," because the word is not even in our language, really. So let's clarify what's going on with this whole myth of curry. Here are some more deets.

What is "curry" to most Westerners? When someone says, "I made a curry for dinner," you would most likely assume they had some kind of Indian food for dinner. Curry to most people is a rich, flavorful gravy that usually has vegetables or meat, that you generously pour over rice. Sound familiar? It's a term you usually use to refer to any dish in Indian cuisine, kind of like a generic category. To most everyone, Chicken Tikka Masala? Curry. Rogan Josh? Curry. Chana Masala? Curry! But none of these are actually curries! Read on, my friends.

Is "curry" Indian? Nope. Curry has nothing to do with Indian food, actually but rather is a gross misunderstanding! There are a few specific dishes in India whose names sound like "curry." One is "Kadhi," and another is "Kari." Both of them are sauce-like with a gravy. But it appears that the Brits (cue Hamilton Soundtrack) did not grasp that these were names for those specific dishes, and wrongly assumed that all dishes that had some type of gravy in it were referred to as "curries." Fail on their part. And they took it with them back to the UK. So it was a SNAFU that led to the Brits creating an entire category of Indian cuisine. As a result, Westerners were introduced to this idea that all dishes with gravy from India were referred to as "curries." Wrong! In India no one refers to dishes that have some gravy, as a curry. They'd call these dishes by their individual specific names like Malai Kofta, Matar Paneer, Dum Aloo, etc. Otherwise it'd be like calling ALL noodle dishes, "spaghetti" or walking into into a Japanese restaurant and assuming all fish is "sushi." (If you think that, we shouldn't be friends.)

So what's the deal with "curry powder"? That's Indian, right? Nope, again. Curry powder is actually something that was created in response to the proliferation of this term "curry" which we now know is incorrect. Curry powder is a blend of many different traditional spices used in Indian cooking, like turmeric, ginger, fenungreek, coriander, red chilies, mustard, cloves, and a bunch of other stuff. So you'd think: oh right, this must be a bunch of spices that an Indian would normally put all together to make a dish... No! (sorry, this must be so frustrating as you are trying to unlearn this term now)! Indian dishes would never actually have ALL of these spices in them. Sure some dishes will have a selection of them. Cumin, turmeric, ginger, and coriander are a common blend. But you'd never have ALL of the spices included in curry powder in one dish because there are extra ones in there, that would distort the authentic flavor of what you're making. So again, "curry powder" is not an authentic Indian spice. You can think of curry powder like a Lawry's seasoning salt -- a blend of a bunch of spices. But as you are cooking "American" food, you would never just dump in some Lawry's every time you cooked, right?

So that's the deal. Now you know why I take pause when I hear someone use the word "curry" when referring to Indian food. And while it's not a "stop the presses"-- type issue, I felt it was time to dispel the myth. And while I LOVE that Indian food has proliferated the world (big sense of pride there), we've been calling it all the wrong things! So in our efforts to share authentic foods and introduce the next generation of palates to world cuisine, join us in learning about foods from all over the world and calling them all the right things. It will make you and your kids sound smarter too when you throw out that you're making mujadara (Mediterranean Lentils). And who doesn't love to sound smarter?