The police lights flashed, and the 2012 Yukon Denali immediately pulled over.

The police officer got out, and began to walk to the vehicle. As he approached the driver's side of the vehicle, he saw the large black man behind the steering wheel and moved to put his hand on the butt of his gun. The driver, sensing the change in dynamic, immediately shoved both hands out through the open window and called out it was okay for the officer to approach the car.

That "large black man" is my husband.

I was just featured in an article in Forbes, and I was chiding Americans for not discussing end of life topics with their loved ones just because it is uncomfortable. However, I am ashamed to admit that I have fallen victim to this myself. Dr. Brian Williams, a friend and colleague of mine, recently had an interview on CNN that reminded me of my own failure, because I have not addressed this aspect of my life before now. I had avoided writing about this because it is difficult and uncomfortable...

The situation occurring in America now can not tolerate any more non-discussion because the topic is "uncomfortable"... So here we go.

As a trauma surgeon, I have a wonderful and unique relationship with law enforcement. We work side by side, and a day never goes by without some interaction between myself and an officer or detective. We testify at trials and all too often we take care of them when they are injured. I treasure this relationship with the people who keep us safe. It is important to me, and one that I enjoy immensely. However, I know that I live in conflict.

I am married to an amazing man who has been my best friend for the past 16 years. He happens to be black, and I happen to be white. Although I know him to be the wonderful husband and father that he is, that he has so many accomplishments both from the football field and now in law school, I also know he is "just" a black man to the police.

I fear for him.

Right after the shootings occurred in Dallas, I called him with tears in my eyes, and reminded him to be careful. To make sure his tail lights always work. To not go a single mile per hour over the speed limit. To do everything in his power to prevent any encounter with law enforcement... Because I know that his 6'6" 300-pound frame makes people, and especially the police, nervous.

Which leads me to my point: How can we make this better? How can we prevent more innocent lives from being lost -- regardless of gender, race or occupation? Because yes, All Lives Matter.

It has been a campaign in inner city communities "If you see something, say something." This is an effort to encourage community members to tell the police if they see illegal activity, to make their community better.

Well, quite frankly this movement needs to move across not only racial lines, but the Blue Line. Police shootings should be investigated by an agency other than their own. When a police officer sees another officer acting in an inappropriate way, or begin to question clearly the wrong black man, they need to be able to say something -- to that officer, to their superior, whomever.

Far too many young black men fit an unfortunate stereotype. We need to educate, provide opportunities and invest in their future so this stereotype no longer exists.

We need to engage each other... Black, white, law enforcement officer and civilian. We need to have these difficult and uncomfortable conversations, and even more importantly as Dr. Williams so eloquently stated, we need to start listening to each other, really listening.

I not only see, hear and understand both sides of the coin, I live them. I am in pain over the losses that our law enforcement agencies have suffered, as I view them all as friends and colleagues. I relive in my mind my own patients that I could not save-law enforcement and civilian alike.

And I also fear for my husband. I fear that one day he will get pulled over, and won't come home to me. We have got to start listening to one another, trying to view this situation from a perspective other than our own, and most of all...

The Shooting Has to Stop.

I am the proud mother of 2 boys, who are biracial. My 4 year old looooves police cars. Recently we were in Chicago, and these amazing CPD officers (thank you!) happily engaged my child who was so excited to see their vehicle. They invited him to not only sit in the car, but to turn on the lights. My son still, over a month later, talks about this day.

It breaks my heart that if things don't change dramatically in our country, that I will one day have to tell him some things that will change his love for those flashing lights.

Although I have never posted any personal pictures before, and certainly not of my children, I am going to make an exception today, for a reason. I want to leave all of us with some hope, an image of innocence...

The image of a little boy in love with a police car. 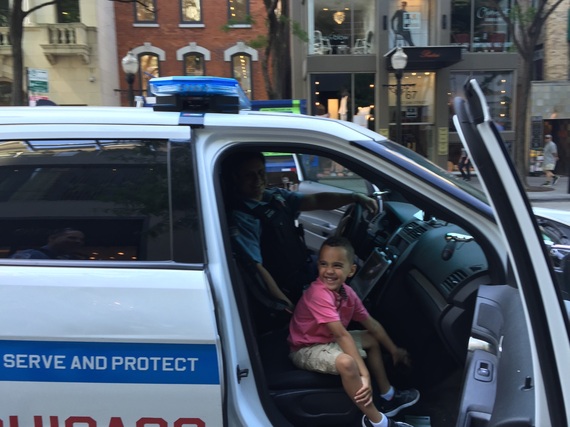 To my friends and colleagues in Dallas, to the victims and their families -- my thoughts and prayers are with you.

Now, let's all get uncomfortable, and change the conversation.