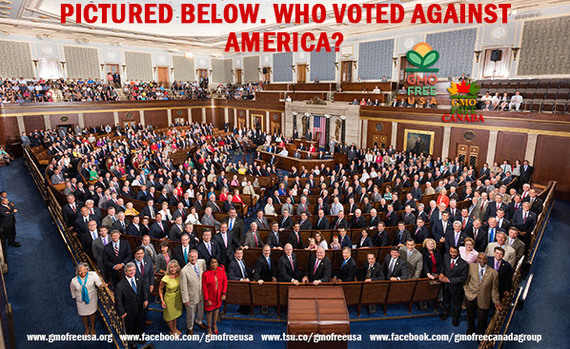 Insanity. That's what you get when you vote for the same people, expecting different results. According to Gallup polls, Congress has averaged an 18% approval rate over the past 8 years, yet the same minority of the population visit the polls to make sure they're re-elected. In 2014, less than 37% of the population voted, and little more than half of them made sure 96% of incumbents kept their seats.

2016 will be different. First, more voters will be coming to the polls because of the Presidential election. Second, they will be better educated because there is now a blacklist of the most heinous vote-against-the-public, vote-for-the-funders offenders, based on a cross-section of bills Republicans, Democrats, and tea-partiers oppose, yet were passed by Senators and House Representatives on the blacklist.

The blacklist refers to those who passed bills that make sweeping, negative impacts on our lives. The first caused the 2008 economic crisis and any further crises caused by derivatives, the second is about outsourcing jobs and making Internet Providers, Big Banks, Big Agriculture, and Big Pharma even bigger, and the third is about allowing Big Ag to hide the fact they are poisoning us.

The 2008 economic meltdown would not have been possible if the Gramm - Leach - Bliley Act (GLB) a.k.a. the Financial Services Modernization Act of 1999 and the Commodity Futures Modernization (CFM) Act of 2000 had not gutted the Glass-Steagall Act. It's been almost two decades and yet we still haven't created a transparent derivatives market, making another crisis inevitable. Elizabeth Warren said of derivatives, "big financial firms will be able to rake in billions when things go well, then come back to taxpayers with their hands out when things come crashing down."

The second bill that is still within our grasp to stop if we create enough of a fuss, is the Trans Pacific Partnership (TPP). 600 special interest advisors who wrote the bill gave themselves: extension of patents on brand-name drugs, a framework for creating internet restrictions, the ability to chill "buy local" movements, easier offshoring of jobs, extension of copyright laws, protections against GMO labeling, rollbacks on environmental policies that stop polluters, and relief for the "too big to fail" banks, among other things.

"We understand the need for field experts to weigh in on trade agreements, but the one-sidedness to aspects of the TPP do far more harm than good for the future of Americans," said Independent Senate candidate Steve Gladstone of Maryland. "Reducing barriers to trade is critical to economic growth and job creation. Seeing a potentially good agreement get mucked up by special interests serves neither America nor our trading partners."

Under the Investment chapter of the TPP, 18,000 corporations who are a party to the agreement will have the ability to sue federal, state, and town governments for loss of expected future profits when a regulation, ordinance, or law stands in their way. The outcome is decided by three trade attorneys in special tribunals that are outside U.S. courts and cannot be appealed. The three lawyers aren't accountable to any country's legal system under this so-called "Investor State Dispute Settlement" process.

The average cost of mounting a defense against these cases is $8 million per occurrence.

The Investor State Dispute Settlement process is already in place under NAFTA, but the TPP would expand corporations' rights beyond what they already enjoy through older trade agreements. Taxpayers will be on the hook for the settlements, yet have no say in any court of law to fight these cases. The TPP and its sister agreement with the European Union called the Transatlantic Trade and Investment Partnership (TTIP) would give 44,000 corporations access to suing our government.

The blacklist shows all the phone numbers to the Congresspersons who voted to "fast track" the TPP, so that American citizens can urge them to vote NO to prevent it from being jammed through during this Thanksgiving to New Year's holiday season.

The third bill that earned Congresspersons their shame on the blacklist is the DARK Act (Deny Americans the Right to Know), a disingenuous GMO "labeling" bill by Pat Roberts (R-KS) and Debbie Stabenow (D-MI), chairman and ranking member of the Senate Agriculture Committee, respectively. Senators and House members voted in favor of Big Ag when they decided, against the wishes of 80 to 90% of Americans who would like to see their food clearly labeled, to pass Senate Bill 764 just in time to preempt Vermont's mandatory labeling laws that would have gone into effect on July 1st.

Ronnie Cummins, founder and International Director of the Organic Consumers Association said, "The problem with the DARK Act is they've re-defined genetically engineered foods. This Stabenow-Roberts is a no-labeling bill, and the message of it to the consumers is shut up and eat your Frankenfoods."

"They use the term 'bioengineered' and their new definition says that you don't have to label something unless you can detect its DNA in a lab, so that would exempt genetically engineered cooking oils and high fructose corn syrup. It's a total fraud. All the RoundUp Ready crops would not have to be labeled, all the bt (bacillus thuringiensis) spliced crops would not be labeled." --Ronnie Cummins, Organic Consumers Association

Vermont Senator Bernie Sanders argued on the floor of the Senate to make Vermont's state law the national standard. "I find it interesting that this legislation has the support of a vast majority of Republicans who day after day tell us how they want to get the federal government out of people's lives. But this legislation preempts dozens of state laws all over this country passed by state legislatures and signed by the governors of those states," said Sanders. After giving a few examples of the ways in which the DARK Act overrides states' laws, Sanders said, "Mr. President, these are just a few of the laws, by the way. There are dozens and dozens more that would be nullified under the Roberts-Stabenow bill."

The FDA does not require long-term testing on human subjects exposed to genetically engineered foods, nor does it require human testing on the ingestion of RoundUp sprayed on RoundUp Ready crops.

Diana Reeves of GMOfreeUSA.org said, "The DARK Act is a patchwork of symbols, QR Codes and phone numbers instead of clear, on-package labels. It will confuse people, not inform them."

The Congressional Blacklist cross-references these bills, showing who voted and who didn't oppose these bills, and who is not up for re-election. All others listed are a warning to constituents: if don't you want the same old Congress, vote for someone else or learn how to run a campaign yourself. If you need help, Bernie Sanders is starting several new organizations to assist citizens and candidates in mounting robust campaigns.

To find out if your candidate is honest, ask them to sign this honesty pledge. It is a list of demands designed to clean up corruption in Congress and fix the ballot box.