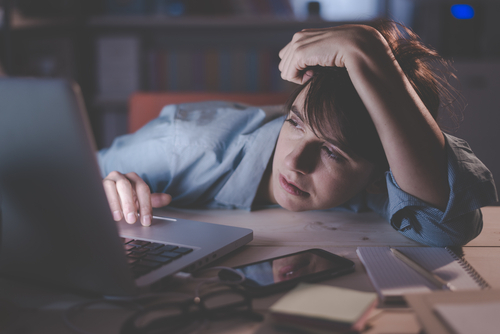 There are several needs common to all human beings, including water, food, shelter and warmth. These items form the basis of Maslow's Hierarchy of Needs: the physical and psychological requirements that must be met before humans can complete other functions. Another of the basic needs is sleep. Did you know the average adult is supposed to get seven to eight hours of sleep every night?

With sleep being a basic requirement of human life, it's disturbing to find research that suggests 50 to 70 million Americans chronically suffer from sleep disorders. That same research shows there are more than 90 sleep disorders that can affect a person.

Sleep deprivation is a real issue, and there are a number of consequences for not getting a good night's sleep. Here are a few of them - and steps you can take to try and overcome those sleepless struggles.

The number of American adults getting less than the requisite seven or eight hours of sleep each night is rising at an alarming pace.
Statistics from the National Center for Health Statistics
show that more than 30% of adult American men and women receive less than six hours of sleep each night, a percentage that has climbed significantly over the past three decades. A constant connection to the Internet, longer working hours, and night shifts are said to be some of the major contributing factors to today's adults sleeping less.

A lack of sleep has an immediate impact on your ability to focus in the days following. In an article for The Atlantic, one journalist recounts having spent four sleep deprived days rambling, hallucinating, and unfocused. You're not doing your professional life any favors by staying up late. A lack of sleep impacts employees' creativity, moral judgment, and memory. In fact, the Centers for Disease Control and Prevention estimates sleep deprivation impacts American businesses to the tune of $63 billion each year through a loss of employee productivity.

So while you think an all-nighter may be best to finish that important report, you'd be better off shutting down for the night and reexamining the work in the morning.

Tips for Getting More Sleep Each Night

Statistics from the National Sleep Foundation website
show that 60% of adult drivers had driven while feeling drowsy, while more than half of that number has fallen asleep at the wheel. So extreme are the effects of drowsiness on one's ability to drive that someone who has been awake for 24 hours is considered just as impaired as someone who is considered legally drunk.

Luckily most drivers wake up before any damage is done, but there is also evidence to show this isn't always the case. The National Highway Traffic Safety Administration estimates driver fatigue caused an average of 83,000 crashes every year between 2005 and 2009, leading to more than 800 fatalities in each of those years.

The impact of sleep deprivation isn't just felt in the hours or days following a rough, sleepless patch - the implications have long term impacts, too. The cumulative effects of sleep deprivation can contribute to much more substantial health concerns, including increased risk of diabetes, depression, heart attack, and obesity.

Part of this could be caused by sleep's suspected link to a human's hormone levels. Psychiatrist Dr. Joyce Walseben has conducted research that shows mood and sleep are inherently linked, and that a lack of one has the potential to severely impact the other. In The Atlantic article mentioned earlier, Dr. Walseben states that when "neurotransmitters are disrupted by sleep loss, the chemical changes in the brain can result in manic feelings and behavior similar to bipolar disorder." Chronic sleep deprivation has the ability to compound these hormonal imbalances to have long term impacts on health and mood.

Researchers at Harvard Medical School wanted to chart the connection between sleep deprivation and hypertension. They took more than 700 healthy men and monitored the amount of time they spent in a state of deep sleep. After three years, it was determined that those who spent less than the recommended 25% of their nightly rest in a deep sleep state were more likely to develop high blood pressure.

As for the links between sleep deprivation and obesity, one study conducted over a 13-year period found that adults who slept six hours or less each night were 7.5 times more likely to have a higher body mass index than those who got a good night's sleep.

Tips to Getting More Sleep Over Time

Ultimately, the way your body is feeling will be the best indication of whether or not you need more sleep. Know what makes you feel focused and fresh, and aim for the golden number of at least seven hours of sleep each night. Your long term and short term health will benefit from it.