Despite a world run amok with rampant greed, hatred and violence, as a Buddhist meditation teacher, I agree with the Buddha's assessment of who we really are. He taught that when our basic nature is unobscured our mind and heart are inherently loving and compassionate. Only the veil of ignorance covers these beautiful qualities. Once we clear away the obscurations and see things clearly, goodness and wisdom shine through.

This is corroborated by modern neuroscience. In his book Born to be Good, Dacher Keltner, Director of UC Berkeley's Greater Good Science Center writes: "We have been designed to care about things other than the gratification of desire and the maximizing of self-interest. Compassion is wired into our nervous system and encoded in our genes." Not only is goodness inherent, it's also contagious. Keltner continues, "Kindness can spread across people and physical space within seconds. The emotions that promote a meaningful life are powerfully contagious."

We clearly affect each other. Like tuning into a radio station, being around a person who radiates peace and good will can help tune our own heart to that same frequency. Recently, I spent some time with my teacher and mentor, Ram Dass, who has inspired so many like me through his teachings and writings, especially his classic Be Here Now. His practice is to embody "loving awareness" and he does just that. I felt the glow of his transmission not only during the week I was with him, but for weeks afterward as well.

Even a statue can remind us of goodness and have a profound effect. In Oakland, California, a neighborhood that was riddled with muggings, theft and prostitution underwent a remarkable transformation after a resident placed a two-foot Buddha statue on a median strip of a residential neighborhood. Others from the neighborhood brought flowers and constructed a wooden shelter People started coming to regularly pray or give offerings. Soon the area transformed into a sacred shrine.

According to journalist Chip Johnson, "Since 2012, when worshipers began showing up for daily prayers, overall year-to-date crime has dropped by 82 percent. Robbery reports went from 14 to three, aggravated assaults from five to zero, burglaries from eight to four, narcotics from three to none, and prostitution from three to none." 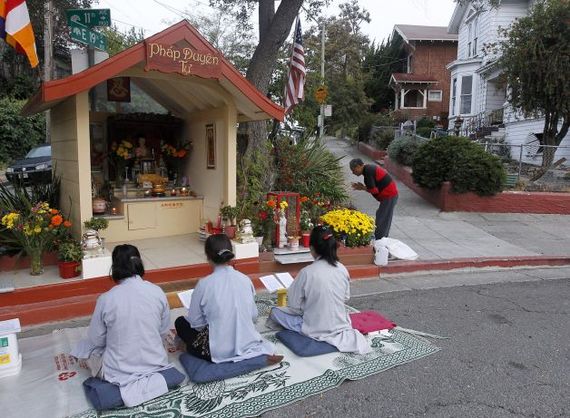 Seeing someone act in a noble way brings out the nobility in ourselves too. Jonathan Haidt called this phenomenon "the elevation response. " We're motivated to be better people by seeing kind, or courageous acts of others. Perhaps that's why we love to watch heroes and heroines in movies and literature or read about them in the newspapers. They awaken those feelings of goodness with in ourselves.

This week, I was inspired as I watched 135 committed, caring lovers of the Earth board an Amtrak train in Emeryville, California. They were traveling together across the country to join the much-anticipated Climate March that will take place this Sunday in New York City in conjunction with the United Nations Climate Summit. These engaged Gaia activists exuded infectious joy and enthusiasm as they boarded the "Climate Train" for five days of teachings, songs and shared commitment to do their part to help heal this planet. 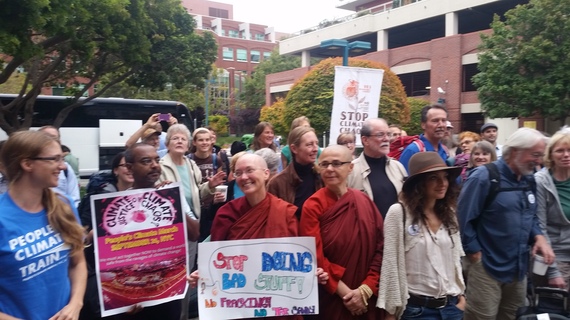 As the Chinese curse says, "May you be born in interesting times." We certainly do live in interesting times, don't we? A friend put it this way: humanity is in a race between fear and consciousness. Never before has the path we choose as a species -- ignorance and greed v. wisdom and compassion -- had higher stakes.

Many despair that things are moving too slowly and there might not be enough time to make a difference. They may be right. Perhaps a course correction that would stave off immense suffering climate change may be too late. But, even though the picture may look grim, there has never been as much awareness and collective caring on a global level about the situation. Perhaps going through this "Dark night of the species" as Andrew Harvey calls it, could be the very thing that wakes us up from our complacency and force us to change our unsustainable ways.

(Note: Starting in October there will be a five free weekly online conversations with audience participation focusing on "Mindfulness and Climate Change" led by some of the most inspiring mindfulness and consciousness teachers.)

We may think that everyone needs to wake up to the harsh reality before things change. But that's not true. Once a tipping point is reached, conventional wisdom can change at breathtaking speed. Witness the change in popular opinion regarding same-sex marriage or the recent public outcry over domestic violence. While there is still plenty of ignorance around these issues, it is no longer acceptable to condone narrow-minded attitudes that have prevailed for so long. Instead of waiting for everyone to see the light, only small segment of the population needs to change their thinking for a paradigm shift to occur. One research study has found that when just 10 percent of the population holds an unshakable belief, their belief will be adopted by the majority of the society.

This Sunday, as thousands in New York and millions more around the world gather to express their love for the Earth, you might let yourself catch that shared nobility and be another agent of compassion for this planet. As we are inspired by the caring and commitment of so many traveling to New York to make their statement of consciousness, we can be elevated and spread that same energy ourselves. The Earth is crying out for humanity to be wise stewards of this precious, fragile world. All it needs is enough of us to be part of that contagion of goodness.