Some of you already know Jacie's Story. If not, please read the article here on the Huffington Post Blog.

Since then, Jacie now has an attorney. One she is confident in and the one she wanted.

She has also gotten shares from celebrities in our community:

Please share this important post that will help save lives. My friend Jacie Leopold is dealing with the most horrible...

In the pictures above, you can see what Jacie's attacker did to her.

She has since seen a doctor who told her that, fortunately, she would not need cheek surgery, but there were still many different breaks and fractures.

"He was concerned because my septum is moved closer to my right side," said Jacie. "It's collapsed partially due to a fracture on the outside bone as well. Both he said are only millimeters, but combined are causing me restricted air flow; making it harder for me to breathe through that nostril. He's suggesting septoplasty to fix it."

She has been given Fluticasone Propionate, a nasal spray, so that she can breathe in the meantime.

She still needs help with her medical bills and if you would like to donate to her crowdfunding campaign, learn more here.

It will take time for her to get the money to fix everything and it will take even longer for the emotional scars to heal, but a group of people in Hot Springs, AR are bent on making sure Jacie doesn't forget. 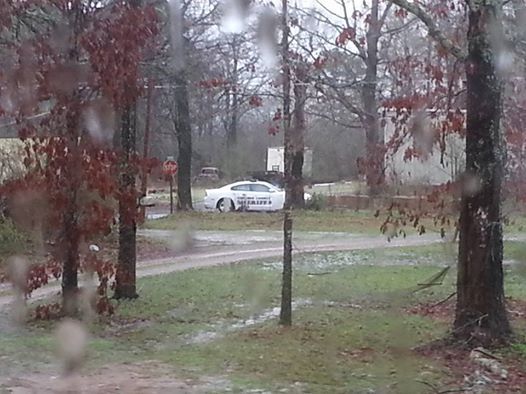 What you are looking at is a Garland County Police Cruiser parked out front of Jacie's house.

"Wednesday at 4pm, me and my room mate returned home from town," Jacie told me. "We discovered a Garland County Sheriff patrol car parked at the end of our drive way. We noted the incident with two photos and posted them to Facebook; to bring public awareness that the officer was sitting at the edge of the property and for our safety. A letter containing sensitive case information had just recently surfaced on social media."

The letter Jacie is referring to was written by someone else who took it upon themselves to register a complaint with the Hot Springs Police Department and ask for more information. The email correspondence started simply with: 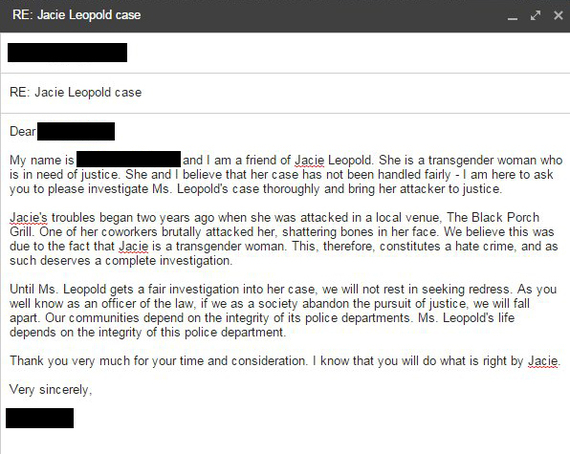 This is the response they received: 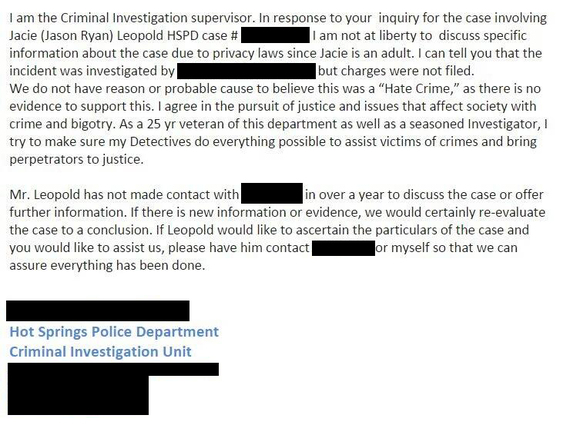 The officer misgenders Ms. Leopold twice as well as refers to her by her "dead name." He says that there is no evidence of a "hate crime."

(In the officer's defense, he does apologize in another email for the misgendering, although the damage was already done.)

Let's take a look at those pictures again and see if there is any evidence of a hate crime, shall we:

Hi, my name is Jacie. I am a transgender woman living in the south. Shortly after coming out as transgender. And...

There are more emails going back and forth between these two as well as another set from an individual living in a different country. One thing the Officer continually points out is that Jacie has not come back to them with more information.

I asked Jacie why she hadn't provided them with more pictures and proof and she told me this;

"Because of all the disregard and noncooperation from them, I'm scared of them."

And who can blame her? Here is another picture of the patrol car from earlier: 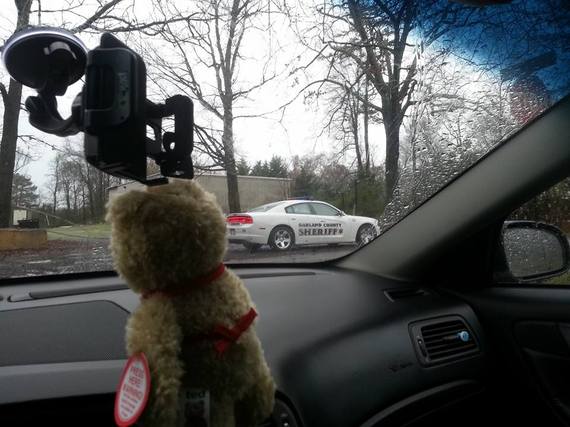 Would you feel comfortable with a cruiser sitting outside your home after all that's happened?

"I have been getting uneasy being here and I find it hard to sleep," said Jacie when I asked if she was afraid to stay at home.

This is a conversation between a friend of her's around the time of the Patrol Car incident. It reveals other information from a different perspective: 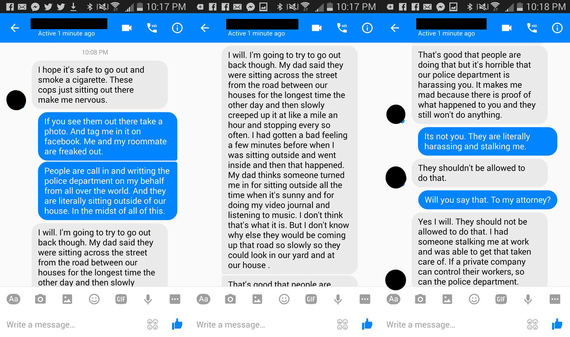 I asked Jacie if she was scared to still reside in Hot Springs, AR;

When asked what she was going to do to find employment she simply replied, "I have no idea."

I have not reached out to the Hot Springs Police Department for I do not believe I will receive a different response. Jacie's attorney, however, is looking into these allegations and plans to contact the police department himself. I will leave that to the professionals.

(At the time of this writing I have not yet received follow up information from Jacie's attorney, but when I do, I will add it to the existing text.)

According to an article in the Advocate, 2016 is already proving to be the most dangerous year for Transgender people and this is coming off the heels of last year being touted as the deadliest. You can read articles on websites ranging from MotherJones to MSNBC about last year.

Already this year, in America alone, there have been four deaths of Transgender people.

There are stories all over the internet of police not coming to the aid of Transgender people, of misgendering them, of treating them like they didn't matter, and more. I could post a link to everything I just said, but a simple Google search will send you to all the information you need to know because the incidents are becoming too many to count.

More often than not, we are treated as subhuman and lacking the rights of every other citizen.

How can we even rely on those that are sworn to serve and protect when we are scared of them in the first place?

This is what can happen to you when you step forward and try to fight back. Especially in a small town.

Jacie is lucky to be alive today, but she still isn't free of prejudice and neither are the rest of us.

For more information on reporting Police Misconducted, please use this link.