When legendary game developers John Carmack and John Romeo got local-area-network (LAN) working for their cult classic computer game Doom, they had no intention of pissing off network administrators by crippling university networks. They had just created one of the most bad-ass games of its time and, more importantly, they weren't concerned with making trivial distinctions between video game players and athletes. Instead, they were having fun playing a game and building the very foundation of the first-person shooter genre and online competitive play -- two massive milestones in the history of video games.

That's right Generation Z, you missed the phenomena of waiting 48 hours to download a game over a 2,400 bit/s modem -- that's bit as in bits -- only to have the transfer cut by your parents picking up the phone.

With the 90s came Doom sequels, Quake, and Unreal Tournament -- three first-person shooters (FPS) with online competitive game modes keeping millions of teenagers glued to their computer screens. Equipped with better modems and computers, gamers could now test their skills against people outside of the typical basement LAN set up, giving birth to global leaderboards, ego, meta-tactics, game-dedicated sites/forums, tournaments and teams. What started off as a few grand in prizes back in 2000 has rocketed up to millions today, with big-name sponsors like Coke, Intel, Red Bull and Nissan. 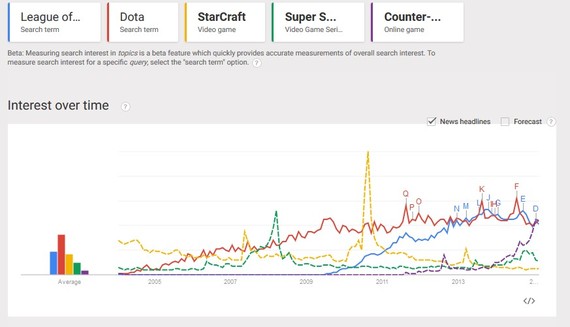 Given the rapid growth around the games played at a professional level, it's not surprising that major news publications have taken interest. And with that kind of coverage, the general public has become aware that professional video gaming is a real thing. Fame breeds hate -- or so it often goes; maybe it's the science behind "haters gonna hate," but out of all the intriguing elements of eSports, the only thing it seems people care about is shouting, "Gamers are not athletes!" Some cannot even fathom the idea that a professional player can have sustaining income from playing video games.

I want to demystify some of this and bring attention to the real sensation in this evolving culture. After all, competitive video gaming is still in its infancy stages. The real issue lies with our definitions, stereotypes and classification system.

Our current definition of an athlete is a person who competes in one or more sports that involve physical strength, speed and /or endurance; athletes may be professionals or amateurs. Thus, video game players -- professional or not -- are widely not considered athletes. At least that's the general consensus you'll find in most comment sections surrounding this topic. However, in spring 2013 the U.S. government decided to recognize League of Legends players as professional athletes and award visas for them to come play in America. As expected, this added fuel to the raging debate but also became a milestone in eSports history. Unfortunately, all this hyped-up concern over trivialities detracts from the intrigue of a growing culture.

To keep things simple and appease both sides of the "are gamers athletes" argument, we'll follow this classification chart for the remainder of the post: 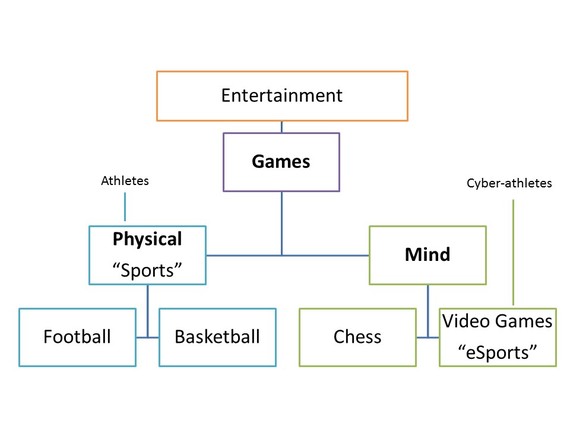 (PowerPoint, based on Sports and eSports wikis)

In 1997, the first real instance of a FPS-eSports tournament was held, known as the Red Annihilation tournament for Quake, pulling in over 2,000 participants. The winner would receive a Ferrari previously owned by John Carmack (developer of Doom and Quake, currently the CTO of Oculus VR). 1997 was also the first year of the professional video game tournament organization, the Cyberathlete Professional League, which is when the term "cyberathlete" started to spread around. Going back to 1980, Atari held the first organized video game competition ever, known as the Space Invaders Tournament, and attracted more than 10,000 participants.

But let's go back, say, a century.

On Nov. 6, 1869 the first intercollegiate game of American football was played between Rutgers University and Princeton, bringing in about a hundred spectators. One of the players, John W. Herbet, recalled,

"To appreciate this game to the full you must know something of its background."

Without a doubt, I'm certain the same players who competed at Red Annihilation in 1997 would have agreed with Herbet.

It wasn't until 25 years later on Nov. 12, 1892 that the first instance of professional American football was played between the Allegheny Athletic Association and Pittsburgh Athletic club. William "Pudge" Heffelfinger, regarded as the first professional football player, was paid $500 (approximately $13,200 today) to play in this game -- the first time a player was ever paid to play. Due to the majority of players being amateur, payment was frowned upon and the sport itself was primarily seen as a new game to gamble on. Betting became common with the establishment of the Amateur Athletic Union (AAA), which haphazardly tried to manage teams, players and rules.

It took 50 years before the National Football League was established to solve the problems the AAA faced, bringing in a group of professional teams with a mission to end bidding wars, stop the use of college players, and abolish the poaching of players.

Here's a simple timeline comparing American football to one of the most popular computer games played at a competitive level, League of Legends: 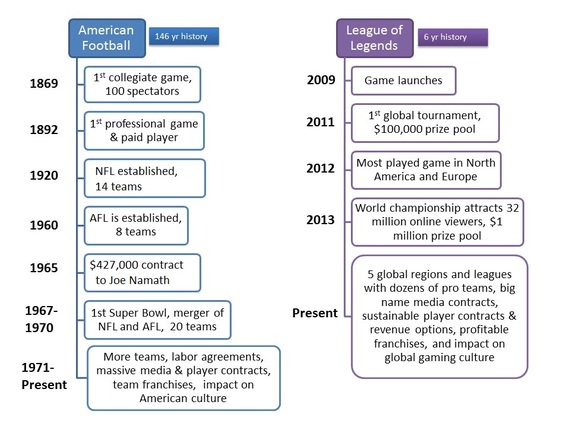 (made in PowerPoint, sources: ProFootball, CNN, League of Legends wiki )

League of Legends is currently around the 1940 era of American football as far as average contracts go, and it's closer to 1985 as far as average viewership goes. According to the NFL in January 2014, the average game brings in about 17.6 million viewers. While more than 27 million tuned in to watch the League of Legends 2014 World Championship, a normal season game pulls 200,000 to 300,000 average viewers. But that number is growing every day.

League of Legends has only been around for six years, but it is evolving about 12 times as fast as American football did.

The League of Legends 2014 World Championship was held at Sangam Stadium in Seoul, South Korea, with tickets selling out to 40,000 fans. And that's just one game in the world of eSports. DoTA -- the game League of Legends inspired from -- evolved into DoTA 2 in 2013 and has actually gone on to host the largest tournament prize pool, with nearly $11 million for their 2014 International. That's a larger prize pool than the Masters Golf Tournament, one of the four major championships in professional golf. Esports has also found its way on to ESPN broadcasts, selling out physical sport stadiums and outperforming physical sport viewer ratings.

What's more, every genre within eSports has its own cultural following, just as football, basketball, and baseball do. Massive-online-battle-arena (MOBA) fans and players are cut from a much different cloth than those of the Fighter genre. There are also outer-game rivalries of the same genre, such as the notorious League of Legends fans versus DoTA 2 fans that mainly squabble in online forums about which game is better.

Here's a chart showing the general shape of eSports genres and the games accompanying them: 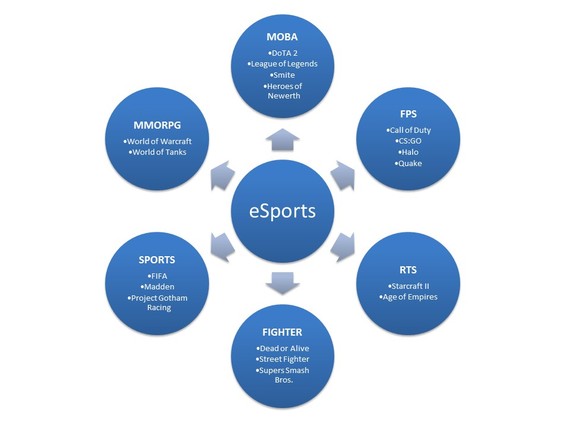 (made in PowerPoint, source: eSports wiki)

Although all of these games have their own followings and history, they collectively contribute to the eSports economy and community:

Although these collective prize pools are miniscule compared to individual NFL player contracts, there are more innovative revenue streams players and teams cash in on. Many players utilize the live-streaming service Twitch which essentially becomes their own online TV channel where they receive individual advertising and sponsorship payment depending on their viewer counts and/or deals. Many of the top Twitch streamers are professionals and have hundreds of thousands of followers, clocking in tens of millions of channel views. While they aren't swinging annual, multi-million dollar contracts, they're trumping the entry-level salaries of most jobs, with some of the best and famous players making six figures annually.

One of the key differences in eSports is that team brands have multiple teams for different games. Imagine if the New York Giants also had their own NBA team with the same name -- that's pretty much how it goes in eSports. Also, the player-fan gap is much smaller. Many professional players are extremely active online and are often very responsive in public discussions and commentary. It's not uncommon to be able to have a question answered by your favorite eSports pro simply by sending them a message on Twitter, reddit or their Facebook page.

Esports teams, just as with physical sport teams, have coaches, analysts, sponsors, contracts, fans and even merchandise. Live events have the same, fast-talking commentators we hear on ESPN, and they also have pre and post-match interviews and discussions. While there haven't been any cases -- as far as I know -- of animal brutality and domestic violence, eSports does have its own drama. For instance, one player was threatened with house possession by their manager, another player was fined $2,500 for poaching, and one player even attempted suicide due to his team's match fixing scandal.

Anyone who competes at a professional level in these games is making the same time commitments and sacrifices that other professional sports players make. The industry is just starting to bloom and both the culture and governing organizations are influencing what form it will eventually take. It was really only during the last two years that professional video gamers started receiving practical, widespread recognition from mainstream media.

"I think they're just as much a sport as football and baseball. You have to dedicate a large portion of your life to becoming good at it. You need to have reflexes; you need to have hand-eye coordination. You have to be able to react quickly to a changing situation."

Some may think, "Why would anyone want to give see a live video game tournament if we're just watching them play on a big screen? Can't we just do that at home?" Think about concerts, shows, and any other form of grand entertainment. It's about the people, the fans, and the culture. It's an experience and it's a new one.

The only wall standing in the way of eSports growth is a fictional one -- a wall that says gamers are not athletes, gaming is not a profession and being a fan of a professional video game team is weird. Well, most gamers are weird. It's an intrinsic trait, one that has defined the culture from the very beginning along with terms like "nerds" and "geeks" for evangelizing technology. But those words never slowed the industry down -- in fact, they've evolved into entirely new meanings.

So it's not so much the fault of the "eSports hater" as it is the fault of how we classify and view our time investments...and maybe a little of it is envy. Society is becoming more comfortable with the idea of professional video gamers and better transparency is being applied to the contracts and viability of video gaming as a career path. The more we recognize gamers for the sacrifices they make, the more we can appreciate them as professionals.