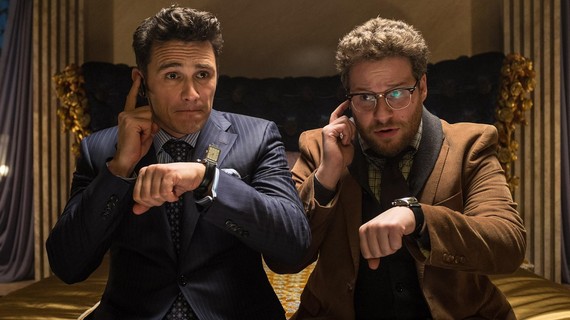 Many people awoke this morning (December 18th) stunned to discover that not only had North Korea been "centrally involved" in hackers threatening a "9/11-style attack" on U.S. soil in protest of the James Franco film The Interview, but in fact Sony Pictures had responded to this threat by pulling the film entirely. If many of us felt this was something that had never before happened in America -- that this kind of threat should be issued in this way, over this kind of film, with this kind of reaction by the film's studio backers -- that's because it's true: this is new territory for America.

The obvious question, then, is why? Why did this happen now, and why in reaction to this particular film? The answer is a complicated one, but the short version is this: The Interview, written by Franco pal Seth Rogen, is informed by metamodernism, a new cultural paradigm with which Franco has often been associated (indeed, The Daily Mail even called him its "torchbearer").

Metamodernism is such a radical paradigmatic response to postmodernism that the artworks it generates are likely to induce reactions -- not just psychological but, in instances such as this one, geopolitical -- of a sort we've never seen before. If you doubt the truth of this, you need only enter into Google News the name of the most famous self-described "metamodernist" in the world: Shia LaBeouf. LaBeouf's public antics over the last year have been so stunning that they've fascinated and frustrated global media in equal measure -- and, likewise, led to popular admiration and outrage in equal measure. And what does he have to say for himself? "Metamodernism has influenced a lot of my actions in the public in this last year and a half..."

This article therefore aims to explain a very complex paradigm -- metamodernism -- in the simplest terms possible, the better to understand why North Korean hackers are now threatening to kill Americans over a Seth Rogen-authored comedy.

Since the time of Cicero, professional translators have made a distinction between metaphrase (translation at the level of the word) and paraphrase (translation at the level of the phrase). Metaphrase is said to create "formal equivalence" between two texts -- inasmuch as each word in the first text is semantically mirrored by a corresponding word in the second text -- whereas paraphrase is said to create "dynamic equivalence," meaning that the whole sense of the first text is mirrored in the second text even if the words themselves are different. Since the seventeenth century, translation theory has presumed that metaphrase and paraphrase are at opposite poles of the linear spectrum all acts of translation reside upon.

A third term, imitation, is often discussed in translation theory, but isn't mapped onto the presumed metaphrase-paraphrase spectrum because, unlike these other two terms, "imitation" implies that a translator may consciously concoct a deviation from her source text.

The problem here is that the spatial relationship between metaphrase, paraphrase, and imitation was developed in the seventeenth century, hundreds of years before theorists in every field began considering the dialectical tension between modernism and postmodernism. If we momentarily set modernism and postmodernism up as poles on a linear spectrum, we see that it is "paraphrase" that maps onto the former term -- as modernist literature presumed the possibility of perfectly mimetic texts whose contours dynamically but wholly successfully represented the real-time phenomena they described -- while "imitation" would be mapped upon the term "postmodernism" because, just as poststructuralist thinking maps meaning's inflection points, imitation uses its source texts to create vectors rather than amplifications.

By the mid-1970s, then, the polar spectrum of translation in fact looked like this:

Not coincidentally, we could equally represent the spectrum above in this fashion:

But let's simplify that.

Imagine, for instance, an English-speaking man saying the words "I am sitting here" while reclining in a Laz-E-Boy in his living room. A paraphrase of that sentence into the Malay language (the national language of the confederation of Malaysia) will ensure that any Malaysian hearing it understands the contextualized meaning of the clause: a man is literally sitting in a chair. An imitation of that sentence in Malay might well exploit the fact that the verbs for "sitting" and "living" are identical in Malay, and therefore such a translation might communicate, instead of "I am sitting here," the much grander and more abstract "I am living here." In poststructuralist terms, we would say that the inflection of meaning at the language barrier between English and Malay permits both (a) a quantifiable loss of content in the traversal from English to Malay, and (b) a "slippage" that reveals the incapacities of language generally.

Because metaphrasic translations are decontextualized -- again, they create "formal equivalence" but nothing more -- they leave determination of context up to their recipient. For instance, a word-for-word (that is, metaphrasic) translation of the English sentence "I am sitting here" into Malay, under the circumstances above described, creates a problem for the Malay-speaking listener, as she must now choose between either of two perfectly reasonable realities: (1) that the speaker merely intended to say he was presently reclining in a chair; or (2) that the speaker intended to claim ownership of the larger space in which his chair had been set down.

In other words, the metaphrasic translation splits a single textual/phenomenological reality (the words "I am sitting here") into two entirely subjective but equally valid realities. Presumably, one can choose the "more likely" of those two realities by looking at contextual clues; for instance, is the man speaking in a relaxed or defensive tone?

So what happens when the determination of context becomes almost entirely impossible, because speaker and listener are communicating in a virtual space within which most context clues are absent? Say, the internet? Quite apart from their literal inability to gauge context clues like body language and tone of voice, two parties conversing virtually may never even have met one another, leaving them without any experiential data with which to fill the void created by the intangibility of their interaction.

Metamodernism is often referred to as the dominant cultural paradigm of the Internet Age. In the Internet Age, individual phenomena are routinely split into two or more equally plausible realities. We can say these realities are "layered atop one another" to the extent that they are experienced, interpreted, and reacted to in a single swath of spacetime; we can say these realities are "equally honored" because the election of one or the other is wholly a subjective exercise.

None of this should worry us too much, however, as usually -- even over the Internet -- we can do just enough sleuthing regarding our circumstances to misunderstand one another only (say) 10% of the time.

Metamodernism is either the deliberate or simply unavoidable creation of scenarios in which any of two or more realities could plausibly be gleaned from a single phenomenon. Imagine, for instance, a "bad" music video that is simultaneously clever and parodic (in that it seems to be imitating some prior "bad" music video) and stupefyingly bad (in that it equally could be unaware of its badness, and in fact may be trying to mimetically reflect the lived experience of its author). A good example of this is the Alison Gold music video "Chinese Food", which could equally be read as either (a) the naively racist artistic expression of a generally well-intentioned preteen girl who is white, or (b) a cleverly parodic takedown of "vanity" music videos such as Rebecca Black's infamously horrid "Friday".

So what happens when we come into contact with a piece of art so precariously positioned between two or more possible (but also entirely contradictory) realities that we can't readily resolve which one is more plausible? When, for instance, we could equally say a piece of art is sincere or ironic, idealistic or cynical, naive or knowing, a veracity or a falsity? The answer is that we experience multiple realities simultaneously; we briefly transcend, that is, both two-dimensional linear spectra (like the modernism-postmodernism spectrum and the sincerity-irony spectrum) and, more remarkably, four-dimensional spacetime. As grand as it sounds, the ability to see two distinct four-dimensional realities simultaneously is an experience only possible in the fifth dimension. This is why metamodernists sometimes say that metamodern art permits a form of philosophical and even scientific "transcendence."

All of which brings us back to Franco, Rogen, Sony Pictures, and The Interview. The Interview does something few if any films before it have done: it depicts the commission of an international war crime against a real-world individual without using any readily identifiable filter to reassure viewers that the entire scenario is a farce. Whereas Trey Parker and Matt Stone's 2004 film Team America: World Police depicted the killing of Kim Jong-Il using absurd-looking marionettes, self-consciously infantile toilet humor, and a script that savagely skewered all participants in the debate over the war on terror via relentless deployment of horrifying racial, ethnic, and national stereotypes, The Interview appears to have no such mechanism to reassure (say) North Korea that the desire to kill that country's leader the film encodes is an unreality. Many times we've seen films whose villains were thinly veiled references to a living person, but never (except perhaps in wartime) has the veil of fictionality been removed so completely and gleefully.

In other words, Franco collaborator Rogen took the unprecedented step of naming names in a live-action snuff flick, and did so in the context of a self-evident "comedy" film to make it impossible for viewers -- or the North Koreans -- to process which of the two realities was the more plausible. Does The Interview "sincerely" intend to romanticize the murder of a real-world political leader, or is it "ironically" depicting an imaginary scenario in which that murder occurs? The viewer, of whatever nationality or political affiliation, is left to fend for themselves. When the viewer is merely a John or Jane Doe from the Heartland with no political authority besides a single vote every two years, there is (at least arguably) no harm or foul in depicting this sort of scenario involving a foreign leader. When the consumer of the film is the entire political apparatus of an isolated, despot-ruled foreign nation, however, the results are dramatically different.

The point here is not to review or even critique a film that has not yet been (and may never be) released. The point, instead, is to further Americans' understanding of a cultural paradigm that is now common in and widely discussed throughout the art world of Western Europe, but which -- while actually ubiquitous in America -- has yet to be seriously engaged with by American scholars, American politicians, or consumers of American popular culture.

A former public defender, Seth Abramson is the author of five poetry collections and the Series Co-Editor for Best American Experimental Writing (Wesleyan, 2015). He is currently a doctoral student in English at the University of Wisconsin in Madison.