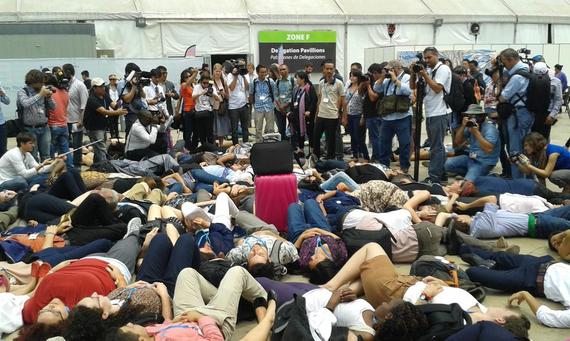 It's late Saturday night in Lima, Peru and the COP20 United Nations climate talks are about to reconvene for another late-night, overtime session. The talks were supposed to wrap up on Friday afternoon -- coming into the talks, the Peruvian environment minister was so optimistic that he suggested the talks would close ahead of schedule. But as the talks have ground on for another day, the same historic divisions that have blocked progress have reemerged, with poorer countries and climate activists making impassioned pleas for action and rich countries urging "compromise."

Watching the final debates of COP20, I'm reminded of that scene in every disaster movie where the hero warns those in power that if they don't step outside of the usual protocol and take urgent action the catastrophic (e.g. meteor, monster, aliens) will take place. Those in power nod politely, say they take the concerns seriously, and then sigh as the hero is dragged out of the room kicking and screaming.

Rich countries here at COP20 say they acknowledge the crisis -- but they don't act like it. They're still stuck in a business-as-usual approach to the problem. You can hear it in their rhetoric. Earlier today, the United States lead negotiator, Todd Stern, urged countries not to support a watered down text that contains almost-nothing in the way of concrete action. Don't let "the perfect be the enemy of the good," he urged poorer nations who were still fighting for a stronger outcome. Failure to sign could, "undermine the entire process."

Of course, far more than the "process" is at stake. Scientists are practically shouting from the rooftops that we're approaching dangerous tipping points, after which catastrophic climate change will be unavoidable. Vulnerable communities, already reeling from the impacts of extreme weather and other climate impacts, are shouting for action -- and increasingly taking matters into their own hands: just a few weeks ago, a group of Pacific Warriors, whose homes are threatened by sea-level rise, took to traditional canoes and blocked a coal export facility in Australia. For them, and the millions more who are on the front lines of the climate crisis, this fight isn't about saving face or a few percentage points of GDP: it's about living or dying. It's about having a country or sinking into the ocean.

One of the mottos of vulnerable countries here at the climate talks has been, "Survival is not negotiable." And yet, with few other options, they are forced to negotiate. They are pressured, badgered, threatened, and then called unreasonable. They're worn down, divided, and then forced to compromise -- forced to accept the "good" instead of the necessary. The United Nations is a place of protocol and decorum, but listen to the speeches and pleas at the negotiations, and you can hear our heroes screaming for the world to wake up. They're trying everything they can to shake the powerful out of their stupor.

In the disaster movie, the powerful usually leap into action at the very last second, just when the alien is at the door or the asteroid is bearing down on Washington. But with climate change, we can't wait for the floodwaters to reach the White House door while we watch millions drown. Ten years ago, people used to say that it would take a major climate disaster hitting the United States to push the country into action. But we've already watched Katrina sink New Orleans, Sandy wipe away parts of New York, drought devastate California, and fires incinerate huge swaths of the Southwest. Yet despite the impacts, climate deniers still rule Congress, and even our supposed champions dig, drill, and burn their way through more and more fossil fuels. They live on, safe in their bubbles, while the poor and the vulnerable bear the impacts of our collective inaction.

How, then, to shake the powerful into action? How to shock them from business-as-usual and into crisis mode? This is where movements come in. If we can't force politicians to realize the future of the planet is at stake, maybe we can force them to realize that the future of their political careers is at stake. We can be the flood that shows up at their doorstep, the storm that rattles the windows, the drought that dries up votes and support for their corrupt policies. In the race against climate change, we must rise up faster then the seas, burn hotter than the fires, hit harder than the hurricanes.

The good news is, we too are reaching tipping points. When the Peoples Climate March swept into New York and cities across the planet in September, we reached our own record levels: more than 400,000 in NYC, hundreds of thousands more around the world. Last Wednesday, 20,000 people flooded Lima in the largest climate march in Latin American history. Our calls for climate justice are rattling windows from Delhi to London to Washington.

It may be too late. Perhaps the asteroid can't be turned around, the monster has grown to big to be defeated. But our movie still isn't over. And until the credits role, I'm holding out hope for our heroes. We may just pull this one out in the end.