New Orleans recording engineer Cosimo Matassa turned 86 on Friday, and Saturday he was inducted into the Rock and Roll Hall of Fame. Cosimo, Cos to his friends, tells the story of his musical role best in his own words, so here's a conversation filmed by our friend Gary Hartley of Grewvia. These are some excerpts, and the full video is HERE and below:

Matassa was attending Tulane University to be a chemist and on the eve of his 18th birthday somehow convinced his strict Italian father to let him drop out and, as he says, cool it for a few months and wait for the draft. Hammertoe, bad eyes, World War II ending -- his father told him 'It's either back to work or back to school.' "By then I had figured out what a chemist was and I didn't want to be a chemist." His father's business put jukeboxes in bars and restaurants on a commission business. When the war ended, the Matassas opened up J&M Music at Rampart and Dumaine streets to sell records and appliances which hadn't been available during the war years. J&M Recording Studio grew from that. "We put a little room in the back for people to make records thinking in terms of personal recordings and that kind of thing. But it quickly attracted people who were interested professionally. Like topsy, it just grew."

Back then, jukebox operators were a major portion of the music business "before radio became pandemic," Matassa explains with a laugh. "It was the jukeboxes in the bars and restaurants and that sort of thing that made it possible to expand the scope of your career. So what you hoped for was a hit that other jukebox operators besides the ones in your town picked up on it and went with it and then possibly created some demand for your talents in other places." There was a circuit in the South, "some called it Chitlin circuit that you could if you had some modest success with a record hook up with a promoter who would hire you and a bunch of other people and take a show on the road." That's exactly what happened for artists including Roy Brown. "In fact Roy Brown did what I think is the turning point recording from the previous kinds of music to what was R and B," Matassa says.

"He did Good Rockin Tonight big band style, full rhythm it's got a gospely flavor to it but it's not gospel. In fact I think it was taken from a gospel song because the lead line is 'Have you heard the news there's good rockin tonight?" He describes the song as "anthem-like proclaiming the existence of what was going on, which was people who came from gospel and blues and some of the big band type things to this more compact dancing type music." It was, in effect, the announcement of dawn of rock.

Birth of an Industry

"When recording peeped under the tent, Dave (Bartholomew) was one of the first people to realized what it could mean and he worked at it. He had a good band." Matassa describes the legendary songwriter as a taskmaster. "In fact, in some ways, if there hadn't been a Dave Bartholomew there wouldn't have been a Fats Domino." He explains that Bartholomew kept Domino "focused and aimed in the right direction."

Matassa loved the way the New Orleans sidemen in his studio contributed. "They participated, they suggested, they played things, said what about this, what about that, let's do this." He lauds the cross-feeding of talent and emotion. "Somehow they transmitted that emotion. You listen to those records, you feel that emotion. You don't just hear a playing thing. They transmit a feeling."

He loved "that partnering, that contributing, that 'let's do this together and do it as good as we can' kind of attitude they had, and for a sideman -- a session musician -- that's marvelous. I've been around the country and sat in on sessions and did some in other places and I always felt that New Orleans guys had a better attitude about what was happening."

"What we had back then were many many small record labels, independents if you want to group them under a name." It was often a labor of love over lucre. "The independent recording labels blossomed after World War II because the technology finally became available to the masses. "Before World War II if you wanted to open a record factory you couldn't because nobody who knew how to do it would tell you how to do it, even for money."

If technological know-how grew after the war, so did the red tape. "When I started, a recording contract was a page." There was a company in New York selling a pad of contracts. "Well now they're 100 pages. They give you the money on page 1, take it back on the other 99. It's a different world. And for awhile it got so corporate. They bought up the little companies so that the two or three or four major companies again were the record business. "

Parallels with the birth of home studios and implosion of the record industry in the 21st Century aren't hard to draw. Matassa deftly describes to Gary the future of jazz, and its chances of survival in a modern market.

"First of all let's take the word, Jazz," Matassa tells Gary with air quotes around the word. "Some years ago New Orleans, in a typical fashion, put a tax on bars and places of entertainment that hired live music. If you had live music you had to pay this amusement tax. That's diametrically opposite of what they should have been doing. But in any event they hired somebody to give them a definition of jazz. Well, which jazz? 1890, 1920, 1960? They're all jazz. They're all what we all love, that improvisational expression, but they're all different. So this, for want of a better word, fool wrote something about what the rhythm is like and it's syncopated and it's this and it's that which doesn't have a damn thing to do with what jazz is. Jazz is just being free. One word - free. Tells you everything about it. That you can get up there with your guitar or your horn or whatever and do what moves you. You know. Jazz!"

And that's what you're posing to me is what it's like now compaired to what it might be 30 years from now. Well it's certainly going to be different. What we can all pray and hope for is that this amazing spirit of good feeling and enjoying life persists and is widespread."

Matassa describes his early days in music where that spirit abounded. "Think if it - what a great way to make a living. My philosophy if you want to call it that is to be transparent. I wanted to be a just conduit of what that performances was, to record it. A performance frozen in time if you will. So if you didn't know I was there, I did my job. I'm sincerely grateful. I appreciate people thinking about my work and I always try to say that all the great musicians made me look good. And I believe that. I wasn't playing. I couldn't have done any of those records if the guys sitting in the chairs didn't do them. So first and foremost, credit to them.

"I will say, I tried my damnedest to make them sound good."

At the French Quarter Festival this weekend, the band The Cosimo Effect played R & B classics that, thanks to Matassa, still sound damn good on vinyl, cassette, CD or streamed on your computer or phone. He could easily have remained one of the many unsung heroes of the birth of rock and roll, but everything he touched turned to gold. Call it the Cosimo Effect.

Lagniappe photos of this weekend's French Quarter Festival and music in and around the French Quarter in this slideshow. Including, as Cos would say, Jazz! 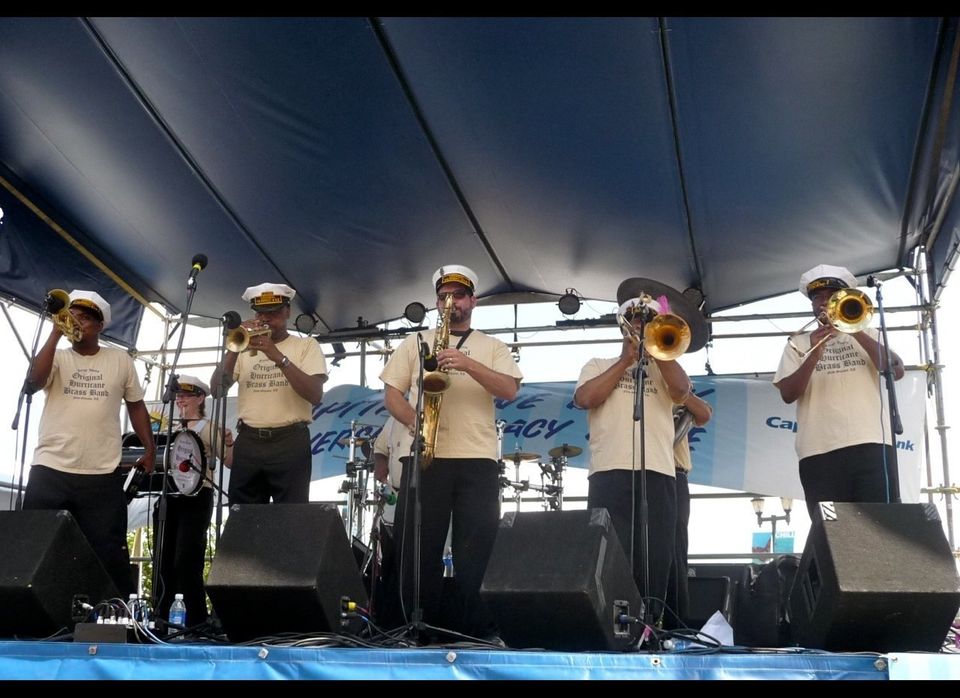