Many of us don't think twice before searching online, uploading a video, or making a statement about a political candidate on social media.

But for countless others, these everyday habits, which are just "givens" for us, are a matter of life and death.

Iranian filmmaker and activist, Emad Tayefeh knows this reality all too well. And he has paid a hefty price for it. 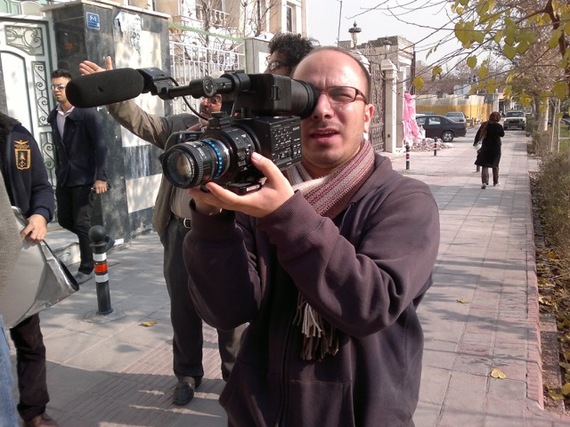 Emad's journey as an activist began when he was 18. He learned shocking details about his country's history and about what took place at the end of the revolution, like when the revolutionary guard secretly killed 150 people -- in just one week alone. He saw the pictures and films capturing these atrocities, and at that point, he knew his perspective would never be the same.

For many years, Emad was scared to say anything, until he entered University at age 22, where he met human rights activists who inspired him because in spite of all the dangers "they were never scared."

And so, at age 22, Emad began to pursue his calling -- making films.

"I decided to make a film and be an activist for human rights and political issues. I wasn't afraid anymore."

Emad's film, Public Enemies, interweaves four different storylines: the untold stories of those who have been victims of the regime for the past 37 years; the stories of famous activists in Iran that have been imprisoned, a perspective on Iran's current situation and last but not least, Emad's personal experiences-- "as a political prisoner and activist. And as a young man that had a dream for himself, and now has nothing."

You see, making this film has nearly cost Emad is his life.

In 2011, when Emad and his crew were out filming, the revolutionary guards found them, attacked them, and destroyed their equipment. "The guards broke my left wrist and right shoulder, they beat my head and they broke my camera too." 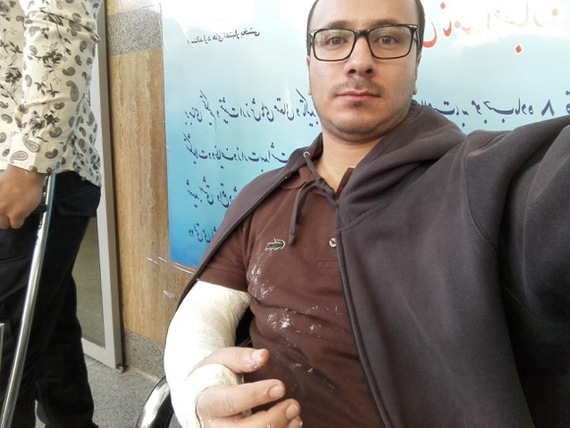 He recalls one particularly troubling night: "One night they took me in the middle of the night to a room. My parents were there. We met each other after three months, three months of not seeing each other, three months of them not knowing where I was. And we hugged each other and cried. But after a few minutes, they took me by force to another room, and they executed five Kurdish people in front of me. And forced me to watch them. Many nights I thought 'I'm going to be murdered or killed tonight'."

But fortunately and miraculously, Emad survived. And more than that -- he refused to give up on his filming. In spite of all the dangers, once he was released from prison he continued filming with his cell phone, and on his own. But of course Emad knew he was not safe and that imprisonment, torture and even death were only a matter of time, so as soon as he finished his filming in Iran, he fled to Turkey -- to live.

Every week or two, Emad has to transfer from one place to another out of fear of the revolutionary guard and spies in Turkey following him. He has, in fact, already had some signs of being followed: "They call you from a private number and try to say they know you to find out where you are. In Turkey I've already received these calls five times." When Emad is not on the run, he's working in a film lab between 10-20 hours every day, for free. In exchange, they allow him to edit his film so he can send it to his friends in the U.S. and hopefully someday release it to the U.S. Congress.

"My life is like this. I don't know what I should do or where I should go. I'm lost in this big city Istanbul. I am so alone. Before it was so bad and now it's so bad too." But in the midst of all this great difficulty, there is one thing that brings Emad joy: films. "It's so good after all of these years to be able to watch films without any limits." In Iran this would have never been possible. "They even censored our own films," he says. And if they ever did show American films, "they were so limited, with so much censorship."

"Our internet was so limited, you know. We couldn't do anything -- not at all. Sometimes we couldn't even open a webpage or blog because the filtering system was so powerful." The only way Emad was ever able to access uncensored and unrestricted Internet before was through the use of a Virtual Private Network. "Honestly, the Internet has been one of the best tools to help me transfer from tradition to modernization. I owe the Internet, because it helped me and taught me so many things."

The Internet also allowed Emad to connect with those ready to fight for human rights. Emad discovered that his story had been shared on Movements, a crowdsourcing human rights platform that enables activists to share their needs and connect with individuals that have the skills to help. They've partnered with SaferVPN, to establish #UnblockTheWeb, an initiative to provide unrestricted Internet access to dissidents in closed societies worldwide. Through the platform he met individuals that have helped to advocate for his release from prison and get his film to producers in the States.

And still, there's so much more to be done. Although Emad still lacks real security in Turkey and faces imminent danger from Iranian spies, he is having an incredibly hard time getting approval to move to the U.S. Imagine if more artists, writers, activists and dissidents were able to speak out, and express their views freely. Imagine if all of us who enjoy freedom of speech advocated on their behalf, and on behalf of their safety.

Because we should. And we could. For all those who have a voice, waiting to be heard.
The cost of freedom is invaluable. And it is a cost we must all bear.

The author, Karen Mesoznik is the Inbound Marketing Manager at SaferVPN.

See the latest post about Emad on Movements. Crowdsourcing the struggle for human rights. Be part of the solution at Movements.org.