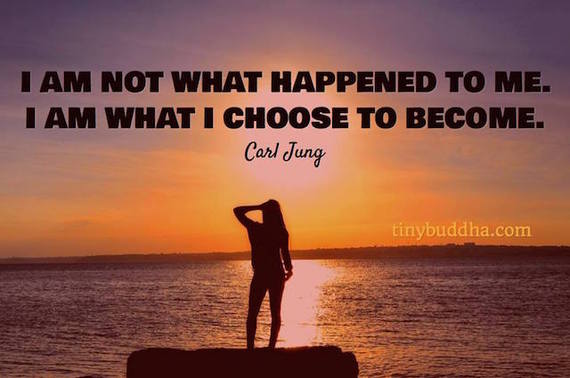 Not very many people can say that they took their darkest moment and transformed it into a community with 1.5 million followers.

Most of us are happy to simply survive and avoid revealing our pain to even our closest friends.

I recently connected with Lori Deschene, founder of Tiny Buddha, to talk about the wisdom that has come from her personal evolution as she created this revered blog. For those of you who haven't heard of Tiny Buddha, it is a daily blog that boasts an extremely engaged community of over 1.5 million followers who are keen to share insights based on their own experience.

Lori started therapy at the age of 12 years old, and although this helped to deal with some repressed anger, she still struggled with allowing herself to acknowledge feelings. As she grew older, she found that she was wrestling with trying to fix what was going on inside of her head, instead of embracing emotions. This desire to numb herself began to manifest as an eating disorder.

Despite this exposure to therapy at an early age, by the time she was in her senior year of college, she had been in and out of 7 different psychiatric hospitals because of her bulimia. She finally found a residential treatment center in Wisconsin and ended up staying there for 3 months.

Lori describes that it didn't feel courageous to get help, but the bravest thing was that, "I was willing to consider that it WOULD help my mental health," after so many failed treatments. In her darkest moment, she told herself, "I have to believe there is a different way," as up until that point her whole life revolved around her eating disorder.

She knew it was a life and death decision.

Learning to Live a New Way.

After finding the tools to start moving past bulimia in the Wisconsin treatment center, Lori had to start creating a new life for herself. I asked what her sources of wisdom were in the post-treatment chapter of her life.

"Wisdom is nothing more than healed pain."

Part of the recovery from her eating disorder was learning to deal better with the pain that she experienced. Realizing that she was actually a very sensitive person meant that she had to embrace the emotions that she was constantly flooded by.

One of the pivotal books she read was How to Practice: The Way to a Meaningful Life by His Holiness the Dalai Lama, in which she began to explore the concept of mindfulness. She also was inspired by a NYC yoga studio owner who helped her, "learn how to show up and do something healthy with her body."

She eventually started tweeting inspirational quotes under the handle @tinybuddha and blogging as a means to "recycle her pain" in order to help others. Little did she realize that she would soon gain a huge following of people who were keen to connect with the simple insights she shared.

The Challenge After Success.

As her following grew, she eventually had a crisis when she realized she no longer wanted to write everyday for Tiny Buddha. After several years of intense personal growth, Lori had to determine a new role for herself.

Many entrepreneurs would have simply taken their massive following and leveraged this into another opportunity, but Lori knew there had to be a different way. She chose to redefine her role within the community, changing her role to facilitator in order to help others tell their personal stories.

This concept became so successful that Tiny Buddha now only accepts guest posts a few times a year due to the overwhelming amount of bloggers who are keen to share their stories on this popular site.

Being an influencer in the wellness blogosphere has the additional challenge of people expecting you to practice what you preach.

I asked Lori what she does to feel happy, and she quickly rattled off a list that included watching movies, hiking in nature, being near the ocean, eating at restaurants with amazing ambiance, and traveling.

In the spirit of believing there is something else, she is making plans to nurture her creative side through painting classes and to reconnect with her love of community theatre (she was in Gypsy when she was younger, for those of you musical theater buffs).

Determined that she can still expand while anchoring her community, Lori is also contemplating a few side projects involving fiction writing and short film.

Sparing You From Learning the Hard Way.

We all have battle scars from painful lessons learned.

Lori's biggest life lesson is to, "Stop fighting so much...accept and embrace where you are."

Stop fighting the emotions and let them wash over you. Have the courage to believe that you can handle them differently.

Stop fighting the fact that you have changed. Have the courage to believe that you can do things differently.

Stop fighting the urge to be more creative. Have the courage to believe that you can express yourself differently.

If you haven't already joined the Tiny Buddha community, you can connect on tinybuddha.com.

Lori's third book will be published by Harper-Collins later this year and you can check out the Tiny Buddha online course, "Recreate Your Life Story."

Secondhand Therapy recently guest blogged on Tiny Buddha, "5 Childhood Mantras that are Poisoning Your Happiness," will be featured in the upcoming Tiny Buddha book being published by Harper-Collins, and also offers eClasses designed to help you reconnect with yourself in eight different areas, so you can start enjoying life.