Neither Did the Politicians, Nor Their Hangers-on -- Random Thoughts on Last Friday's Supreme Court Victory 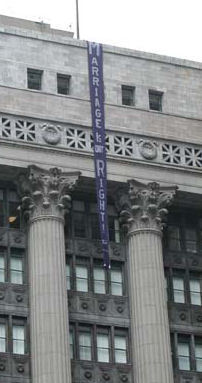 It's been a long road to get where we are today. I can remember back when most even in the LGBT community could give a damn about equal marriage rights, despite so many dying from AIDS and surviving partners being left without SSI benefits, being evicted from their apartments, straight relatives stealing the survivor's possessions, etc.

Many self-styled "radicals" (the quotes are intentional) tried to cast marriage as solely a white, upper middle class gay obsession. But not only did the material facts belie this argument, so has polling the data of Black and Latino LGBTs.

It is a commonplace that one of the primary motivations for young het couples to marry is to provide a more secure two-parent situation for their new or impending offspring.

And this material reality was also reflected in attitudes towards marriage from early on. As Robin Tyler and I wrote [2], a year

2000 survey of black LGBT people [by eight Black Pride organizations and the NGLTF], which was published well before the marriage issue dominated mainstream press coverage of the LGBT community, directly contradicts the stereotype that only wealthy white gay males want marriage rights. When asked what are the most important issues facing black LGBT people, respondents to the survey listed "marriage/domestic partnership" as their number three priority.

Given the enduring racism and sexism, not to mention homophobia, that disproportionately shunt such African American LGBT couples into working-class occupations, it is fair to say that the above figures on child rearing reflect not only racial realities also class distinctions. In other words, marriage and the family are much more important to the material security of working-class people than they are to wealthier people, who are usually better able to afford attorneys to construct the intricate web of legal documents needed to imperfectly mimic the contractual features of heterosexual marriage.

As the report itself noted,

The support for marriage in the sample is especially interesting not only because it was most forcefully embraced by [Black] women, but also because it contradicts the position of those, most often on the left, whose marriage as an issue most salient to White GLBT communities.

And far from the Democratic Party and their white-dominated LGBT NGO allies leading the charge for equal marriage rights, the former saw it as an electoral loser, and the latter took their cues from their party allies. NGLTF, for example, had as one of its few major plenaries at its 2005 "Creating Change" two speakers, both who savaged the marriage rights movement, and gave no opportunity for the fuming grassroots activists in the audience to respond.

You see the Dems were deeply implicated in the status quo bigotry. After Bill Clinton appeased the right by passing the 1996 Defense of Marriage Act (and NAFTA, and Anti-Terrorism & Effective Death Penalty Act, etc, etc), he took out ads on Christian Right radio stations bragging about it, as part of his re-election bid.

One of the many hidden stories of how we got to today involves how some Dems got "turned" on the issue. It wasn't through polite lobbying. Or reasoned argument. It was power politics.

In 2003 the Dems nearly got served in one of their primary local strongholds -- San Francisco. An insurgent Green Party candidate, Matt Gonzalez, took 47 percent of the vote for mayor against Gavin Newsom. To shore up support for the local DP that had just received the scare of its life, a few months after his election Newsom began issuing marriage licences to same-sex couples in a city that was estimated to be 1/3 gay.

This totally pissed off the Dem bigwigs in the rest of the country. It made them look bad. They had long proclaimed support for LGBTs, but following Bill Clinton's lead, and polling on the issue, had steadfastly opposed equal marriage rights for same-sex couples.

Gay Democratic Congressman Barney Frank (who introduced the notorious "Don't Ask, Don't Tell" bill into Congress) was the principal hatchet man against Gavin Newsom, blistering him with criticism for doing what the DP as a whole should have been doing if it truly supported LGBT equality.

But Newsom's actions totally gave a shot in the arm to grass-roots LGBT activism for equal marriage rights around the country, including here in Chicago.

And then many of the early court decisions for equal marriage rights came from Republican justices, no shit. The Dems were petrified of taking any stance on the issue, seeing it as a "loser."

Country club Republicans, on the other hand, had more freedom. It was an "only Nixon can go to China" moment. So it was a predominantly Republican court, the Supreme Judicial Court of Massachusetts, that issued the first state-wide legalization of same-sex marriages. Another early pro-LGBT decider was an elected state supreme court in Iowa, which was Republican. And it was a Republican justice, and yes he was also gay, who struck down California's notorious Proposition 8.

I don't say this as a fan of the Republicans, whom I loathe, it's just that you'll never get these truths from the LGBT NGOs which almost to a one operate as wholly owned subsidiaries of the Democratic Party.

So if not from the politicians of either party, where did equal marriage rights truly emanate from?

Where rights have always emanated from -- from regular working people.

What hasn't been examined is WHY this was so. Young people are not necessarily concerned about social issues, but they were about this one, and there's an historical reason for that.

In the fall of 1998 a young gay college student, Matthew Shepard, was lynched in Wyoming. Thanks to what was the first successful example of internet organizing, a flurry of protests, vigils and marches occurred in every major, and many minor cities around the country. It was an unprecedented phenomenon.

And they couldn't talk about equal rights for LGBTs with a straight face so soon after passing their Defense of Marriage Act against us (and before that, Don't Ask Don't Tell). Instead, they cynically used talk of hate crimes laws as a way to beat up on Republican legislators, while avoid discussion of their own complicity in producing the hate climate that killed Shepard through their passage of DOMA and DADT.

Even though the flurry of Shepard protests died down after about a month, things on the ground, among the youth, had qualitatively changed. Whereas there were only 200 gay-straight alliances in the nation's secondary schools at the time of Shepard's lynching, within three months that number had tripled.

In essence, our LGBT youth and their allies began organizing at the base, challenging homophobic students, teachers, parents and administrators, and changing attitudes especially among their peers. They weren't campaigning about same-sex marriage per se, but they were campaigning for our civil rights nonetheless.

The countless protests of countless, many anonymous local marriage rights activists helped move the issue to the top of the LGBT agenda (at least according to polls), but it was the youth, and their in-school organizing for dignity and respect that led the demographic wave that led us to today's victory.

That's who deserves the credit for today, not politicians of either party, and certainly not justices.

This was truly a collective effort. From plaintiffs to protesters, all of the early and most important initiatives were from mostly anonymous people who were just pissed off and didn't want to wait, with zero institutional support, and frequently with their direct opposition. It was only after those "ordinary" people worked up momentum on the issue that the big organizations came in to get credit for what was initiated by others.

So next time an HRC staffer asks "Can you spare a few minutes for human rights?" Say "No, I can't spare any $ for NGOs with their six-figure corporate salaries."

Finally, a personal indulgence. A full recounting of my favorite equal marriage rights action can now be told, now that the statute of limitations has lapsed, and our crimes can be safely confessed, lol.

In 2004 we did a banner drop from the restricted roof of Chicago City / County Building -- and didn't get caught! A pair of us dressed up in maintenance workers' uniforms with our banner rolled up in paper like a carpet, we had an official-looking clipboard that looked like we had a work order.

The key to our act, though, was our Teamster caps -- "No one messes with the Teamsters" (I think that's a line from a movie). Rather than climbing a scary, see-thru-to-the-ground outside fire escape about 15 stories up as we originally planned (yes, we had previously cased the joint), we got an escorted ride on a freight elevator all the way to the top "restricted" area.

We did our banner drop, then ran in opposite directions, shedding our uniforms into garbage cans as we ran down the stairwells. It was fun, it pushed the envelope, it shamed the alleged pro-LGBT city and county administrations who a few years earlier had clapped us with bogus felony charges in the same building.

[2] Robin Tyler and Andy Thayer, "The Gay Marriage Struggle: What's at Stake and How Can We Win?" in Martin Dupuis and William A. Thompson, editors, Defending Same-Sex Marriage:The Freedom-to-Marry Movement, Vol. 3, Praeger Press, 2007. Yes, the reference to "gay marriage" in the article's title was unfortunate, but was a product of the times.