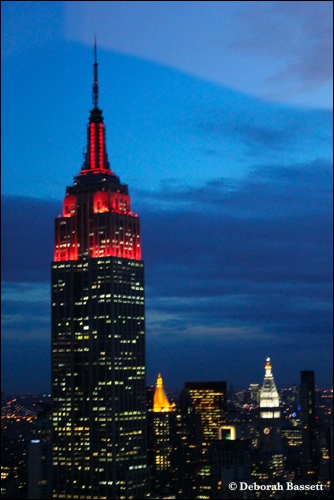 On Saturday, December 10th, Ric O'Barry, star of the Academy Award-winning documentary film The Cove, joined Filmmakers Louie Psihoyos and Fisher Stevens, Actor-Comedian John Leguizamo and Race Car Driver Leilani Munter to take part in a momentous lighting ceremony at the Empire State Building to honor the thousands of dolphins slaughtered annually off the coastal waters of Taiji, Japan. The color red was chosen to symbolically represent the bloodshed.

Dolphin meat, which contains toxic levels of mercury, is sold as food in Japan even though it's unfit for human consumption. Yet according to the once famous "Flipper" trainer turned dolphin crusader, many people in Japan still don't know this is happening. O'Barry stated:

"This ceremony is about reaching the people of Japan. It is a plea for their help in shutting down The Cove. Before the people of Japan can stop their government from supporting this annual slaughter, they need to know about it. We believe that the Japanese people love dolphins and that once they know what's happening, they will take action to stop it. It's really up to them."

It's certainly not everyday that a national treasure is used as a voice for nature. The idea to light up the Empire State Building was conceived by Dolphin Project volunteer and professional race car driver, Leilani Munter, who was instrumental in convincing the owners of the famous building to host a special lighting ceremony in order to keep a spotlight on the plight of the Taiji dolphins in the international media. During a press conference on Saturday she stated:

I am so honored to be here today with Ric O'Barry and Louie Psihoyos. I believe that The Cove is the best documentary ever made and seeing this film changed my life. I have been to Taiji, Japan three time since then and have witnessed firsthand the horrific slaughter of dolphins in the infamous killing cove. As someone who is half Japanese, this issue is incredibly important to me and I hope the Japanese people rise up and raise awareness within Japan about dangers of mercury tainted dolphin meat. 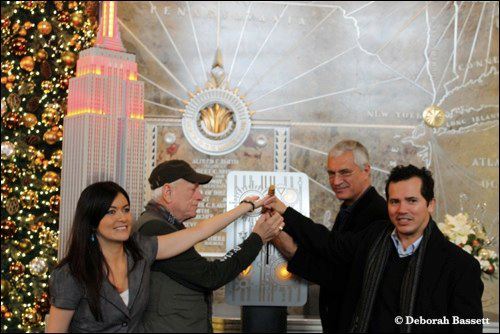 O'Barry reminded the audience that the slaughter of dolphins persisted despite global awareness about the Taiji dolphin hunt. He added:

"We still have a lot to do in The Cove. Today, they captured and slaughtered another 30 dolphins. It is important to keep it in the news. This lighting also honors the millions of people around the world -- most especially those in Japan -- who have joined us in our effort to raise awareness about the slaughters in Japan, The Faroe and the Solomon Islands, as well as the issues of global pollution and the overall health of our oceans worldwide." 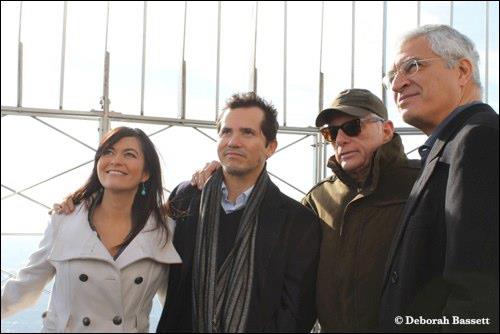 Munter, Leguizamo, Psihoyos and O'Barry atop The Empire State Building.

Cove Director Louie Psihoyos teamed up with O'Barry in 2007 to expose the dark reality behind the Taiji dolphin slaughters, earning he an his covert team of elite activists the 2010 Academy Award along with a lifelong dedication to the cause. According to Psihoyos:

The Empire State Building is arguably the most iconic building in the world. In the hearts and minds of the entire world it represents a beacon of what humanity can achieve when we dare to dream a better world. With The Empire State Building shining the most powerful light in the world down on The Cove it gives me hope that one day soon humanity will rise up to shut it down. Evil cannot survive this kind of light. -- Louie Psihoyos, Director of The Cove

For more information and to learn how you may take action, please visit: The Dolphin Project.

More photos form the event may be viewed here. 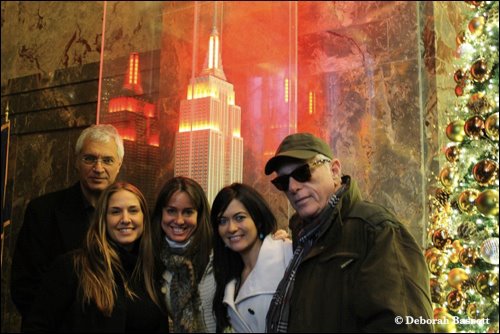